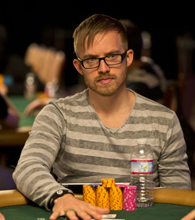 We’re thrilled to be bringing you an exclusive video Q&A interview with poker’s newest champion, 2014 World Series of Poker Main Event winner Martin Jacobson. As a poker fan first and foremost, it’s a surreal thrill to have the opportunity to speak with any Main Event winner, much less the newest one. Moreover, as a poker writer it’s incredibly gratifying to have been able to achieve one of my poker goals for the year. From my interaction with him and the great answers he gave to my questions, I’m sure you’ll also be able to see why Martin Jacobson is one of the better ambassadors poker could’ve hoped for.

Much like his performance at the final table, Martin was fully “on his game” during the interview (must have something to do with the CILTEP “mental game” supplements he takes). Congratulations Martin, and we wish you much success in all of your endeavors moving forward. The embedded video below is followed by a summarized transcript of the interview.

We’re here with Martin Jacobson, the newly-crowned winner of the 2014 World Series of Poker Main Event. Martin, we’re happy to have you with us – welcome to the Cardplayer Lifestyle poker blog. So it’s been a little over a week since you won the big one. How are you feeling? What have you been up to?

I’m still trying to process what really happened. I stayed in Vegas for a few days longer than planned after the final table. Then, I flew here to LA to visit my buddy, which is something I had planned on doing anyway; just to relax and chill. No poker for me in the near future.

So let’s talk about Sweden; you’re Swedish. Have you received any sort of recognition in Sweden for this amazing achievement? Did the King or the Prime Minister call you – maybe a famous Swedish personality congratulated you?

Haha, not really. I’ve had some Facebook messages from Swedish people who just want to say congratulations. I’ve also got some invitations for some big media organizations in Sweden to do interviews.

Well, now you sort of represent Sweden in a sense. So, what does that responsibility mean to you?

It means a lot. I could never have imagined I’d be where I am today when I started playing. It took a lot of hard work and dedication to achieve all this. It feels great to be able to be in the position I’m in right now and get the extra ability to speak about poker and hopefully improve the position of the game both in Sweden and worldwide. I’m the world champion…

It must feel really cool to say that.

Yes, it does! It’ll never get old.

Well, just one little wrinkle with the Sweden thing. Obviously you’re proud of your country. You posed with the flags when you won. Yet, like many other top European poker pros, you live in London for tax purposes. This makes sense of course, but what are your feelings about that situation?

I think it’s really sad that I was kind of forced to move to London if I wanted to continue playing poker. It wasn’t sustainable with the tax laws as they were in Sweden at the time. It’s a little bit better now – recently things changed a bit. Most of my friends live there in Sweden and they pay their taxes. It used to be that poker was considered a lottery-type game, in that you’d have to pay taxes on winnings without being able to deduct for losses. So if you win and lose 100K in a day, you’d still have to pay taxes for winning the 100K.

Well, now that you’re in a position of power, maybe there’s something you could potentially do about it? Maybe you’ll go and speak in front of Parliament?

Yeah, I’d love to do that. That would be fun.

Many poker fans are familiar with “Isildur”, Viktor Blom, another big name Swedish pro. Do the two of you know each other? Are you friendly?

Ya. We’re friendly. He’s a really fun guy, but I haven’t seen him in a while. He doesn’t play tournaments though and I don’t play cash games. London’s a big city. But I understand that he still plays the high-stakes cash games.

Among the first things you said after winning was that you were proud to have the chance to be an ambassador for poker and could really represent the professionals well; the guys who take the game seriously.  Why do you consider ambassadorship to be important and what do you hope to accomplish in your new role?

It’s important because in anything you need a “role model”. You need people who take things seriously and who can set great examples for how to approach things as a professional. Since poker is related to gambling, even professional players have a hard time admitting how much is skill and how much is luck. But preparation and hard work will increase your winnings and success. With the preparation I did before the final table, during the four-month layover, I couldn’t have expected it to go any better than it did.

Well, as an ambassador now, you’ve been making efforts to be available for dozens upon dozens of media outlets, both in the mainstream as well as within the poker industry, including right here on Cardplayer Lifestyle – thank you again for that. But the thing is you’re an expert; a high roller and a high-level thinker. Do you find some of the more mainstream interviews to be a bit frustrating? I mean, you were just on CNBC and essentially had to explain the absolute basics of what a flop is in Texas Hold’em. How do you deal with something like that?

I think it’s just important to be ready to deal with any question. Not everyone knows as much about the game as I do, nor do they have my kind of experience. It’s kind of refreshing to hear people speak about poker in a more amateur way and show interest in the game and want to learn more about it. So it’s actually not frustrating at all.

So, I have to ask then, do you miss the home games? Do you still have a home game you play in?

Actually, yeah I really miss it. Hopefully someday I’ll just go back to the home games and just play the games for fun from time to time. When we get bored in Vegas during the nights, sometimes we get together and try some new games and mixed games.

Well, you’ve played live poker a ton in both the US and Europe. Would you say that there’s a difference between American and European players? Maybe personality plays a bigger role when playing in the US?

I think there’s a clear difference in styles between European and American players. Actually, I think every nation has its own playing style, generally speaking. Sometimes you can even see patterns people have in their game depending on where they’re from. In America, the approach is more conservative towards the game; kind of ABC. I’m not talking about the pros, more in general. In Europe, you see more willingness to gamble and take big risks, massive bluffs, even from an amateur. The Italians and French are very emotional and passionate, so they’re not afraid to move all-in with nothing every once in a while. At the final table it was fun – a big variety of nations competing for a big prize.

OK, so about that big prize. You’re only 27 years old and you’ve just won $10 million in the most prestigious poker tournament in the world. Obviously, you’ve got your whole life ahead of you. For comparison’s sake, after winning the lottery, lots of people just ride off into the sunset. So why not retire? What does it take at this point to motivate you to play poker – how much money has to be at stake? Surely the hunger has died down, no? Maybe it needs to be mixed games?

For me it was never really about the money, as weird as that may sound. I didn’t start playing poker to become a millionaire or make a ton of money. If I was able to make enough from it to live on, that was more than enough for me. I just had such a strong passion for the game. That’s one of the recipes for success because if you focus too much on the money it’ll put too much stress on you and won’t benefit you when you’re making decisions.

Final topic: TV ratings were down for this year’s Main Event broadcast. Hard core poker fans are still tuning in, but more casual fans can’t name the last few Main Event champions, much less any November Niners. Possibly for similar reasons, with exposure of poker declining, fewer and fewer players are getting sponsorship deals these days. What do you think needs to happen for the game to start growing again, attracting new players and bringing back people who’ve left the game? That’s a very tough question.

That’s why we saved it for last.

So you’re saying that online poker really needs to come back in order for people to start playing again?

I think that would definitely be a huge boost for poker, if it becomes more acceptable again and legal in every state.

Do you think you can help play a role in this and use your influence towards advancing regulation in the United States and other places to push it in the right direction?

I would like to think so, but unfortunately I’m not sure.

Well, obviously we hope that you can. You seem to be a great ambassador for poker. So thank you again so much Martin for joining us here at Cardplayer Lifestyle. Ladies and gentlemen, Martin Jacobson, winner of the 2014 World Series of Poker Main Event. Clearly, along with Volvo and IKEA, he’s one of Sweden’s finest exports. So thank you very much for your time Martin, I really appreciate it.

Thank you very much.

Editor’s note: There’s absolutely no way this video Q&A interview could’ve happened without tremendous behind-the-scenes help and technical support from my brother, Martin Strazynski. From facilitating the recording to video editing to pre- and post-production work, he managed to produce a superb final video product at blazing fast speed without sacrificing a single iota of quality. He is available for all manner of IT services including the presented media production efforts seen here and can be reached via Twitter @muffnman.