Phil Galfond’s This is PLO: A Thorough Review by a Poker Pro (Updated 2023)

Phil Galfond has long been regarded as the end boss of the high stakes Pot Limit Omaha world; he has been crushing the game for the better part of the last 20 years. Recently he felt the need to prove himself once again by issuing the Galfond Challenge against ANYONE willing to play. The rules were simple:

Phil is a perfect 5-for-5 against some of the top players in the world including Venividi, ActionFreak, Chance Kornuth, Brandon Adams, and Dan “Jungleman” Cates. Combined, he is up over $1,500,000 from his opponents between the poker and side bets.

What does this have to do with learning the great game of Pot Limit Omaha? Simple: Phil has turned his hundreds of thousands of hands into a course for his Run It Once Training site called This Is PLO. In it you’ll reap the rewards of his having broken down thousands of hands and running them through the solver, then sitting down to record his thoughts of how to play PLO.

For all intents and purposes, there are two ways to learn any type of poker: through intuition and through studying. Intuition lends itself to watching others play, feeling out the right time to bluff, watching what hands win at showdown, and figuring out how to manipulate situations to your advantage at the table in order to win the most with your best hand and win when you have the worst of it. Many modern players, however, lean towards studying and putting in work away from the table in order to understand the fundamental mathematical reason and the why behind every decision at the table.

Who Should (and Shouldn’t) Buy the Course?

This Is PLO is for the truly serious poker player who wants to dig into the depths of the game and uncover every nuanced reason for being in Omaha. Phil has put together a course that covers over 15 different segments of the game tree. Each segment of the game tree is broken down into four different branches, and each branch has 3-5 separate leaves. If the conversation of a game tree and the multiple facets of decision that fall off it leaves you scratching your head then it’s recommended to look elsewhere to learn the fundamentals of PLO. A wonderful spot to start this journey is through the more beginner level PLO course From The Ground Up on RIO. But if you’re serious about taking your game to the next level, this is the course for you!

As you can see illustrated in the screenshot below, each tab is broken out into Dynamic Boards, Straight Boards, Flush Boards, and Paired Boards. 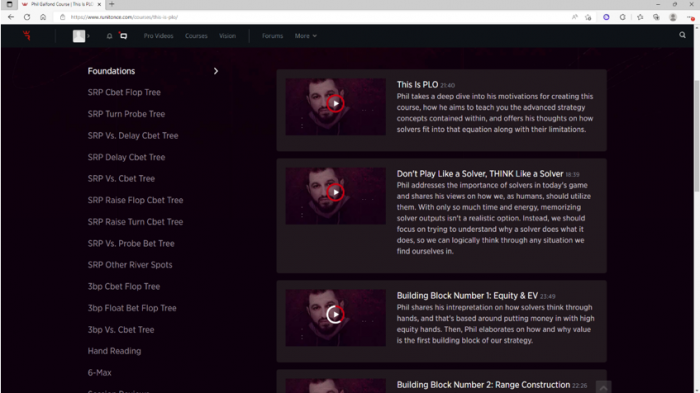 The first few videos within the course are all about the fundamentals and delve into the math behind calling ranges and Minimum Defense Frequencies required to call down your opponent based off their bet sizing. It is very dry, it is very much like a professor walking his class through a problem on the chalk board. It is what’s required to win.

You will need to break it up in to multiple sessions and probably go back and rewatch it to make sure it sinks in. This section of the course is also inherently necessary to understanding the base level strategy in order to lay the foundation for your entire game so that you don’t have any fundamental flaws or leaks. You are going to need to understand terms like MDF, 1-A, and also want to learn from a mathematical perspective. In short, you need to be prepared to go back to school and unlearn all of what you thought you knew about PLO.

This being said, Galfond actively encourages the student to learn from a solver, understand the whys and hows of what it recommends, and then understand how to incorporate it into your game and deviate accordingly. It’s more than plugging situations into a computer; it’s also understanding the information that comes out. Naturally, it would also be sensible to have some working knowledge of the Run It Once Vision GTO Trainer tool in order to get the most out of this course. 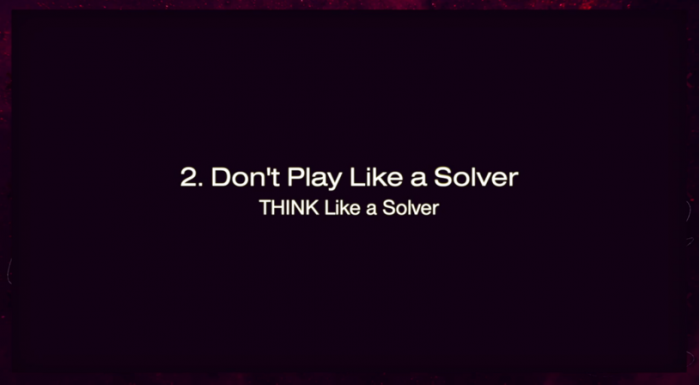 In order to deviate from proper play, you must first know what proper play is. Once you make your way out of the fundamentals there are still plenty more lessons to dive into and Phil uses real life examples of hands he played in his heads up matches and explains his reasoning behind each of his decisions. This, coupled with some solver work to help provide clarity to the fundamental approach, enables Phil to provide a holistic answer on how and why decisions are made in PLO. Sometimes he follows what a solver would do, while other times he walks his own path, but there is always a what and a why for the play at hand. 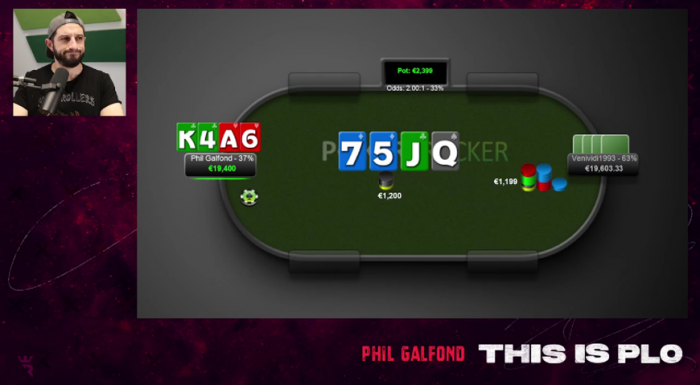 To paraphrase one segment of Galfond’s videos: I’ll simplify my strategy slightly against what a solver would do and it may lose EV but it’s easier to implement in the long run, which means it’s a better strategy as I can stick to it and know what I’m doing across all situations.

The vast majority of This Is PLO material is based off of Galfond’s Heads-Up play from his challenge but don’t let that dissuade you; all of the fundamentals crossover and will strengthen your PLO game no matter how many players are at the table. If that doesn’t convince you then keep in mind there is also a 6-Max section. 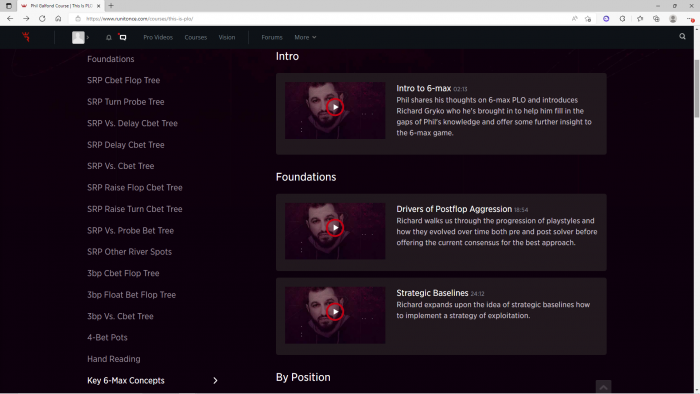 Galfond pairs up with Richard Gryko for 20 different videos covering the nuanced differences between playing PLO Heads-Up vs. multiway. Gryko has multiple solo videos where he breaks down the theory of different spots and, to quote a friend, “Richard Gryko is an amazing player but isn’t the best teacher”. The theory videos are akin to going back to college and trying to stay awake during your 9am Physics class taught by your least favorite professor.

They are extremely dense in knowledge and, as such, if you want to truly ingest the information, you’ll need to watch it multiple times. With that said, they are important and are going to help you build an overall strategy if you give them their due. Thankfully the other 75% of the 6-max coursework is much more palpable.

Phil sits alongside Grkyo and they banter back and forth about situations: what Phil would do, why he would do it, what the theory dictates, and what his counterpart actually did in reality. It helps drive home the concepts and the differences between the two worlds; as much as some players may buy this course and think they can skip all the Heads-Up content and dive solely into the 6-max videos, I would challenge this idea and suggest that it would be detrimental to their overall learning. Spend the time on all sections and allow this section to sharpen your overall game.

Clearly This Is PLO is for professionals who look to make their living by knowing how their four cards interact with their opponents ranges and a variety of board textures. If you play PLO as more than a passing fancy online at stakes of $2-5 or higher or live at $5-10 and above, you are doing yourself a disservice by not buying this course and putting in the hours away from the table to become the best version on yourself at the table. It is a time commitment, as well as a monetary commitment, but it will reap huge rewards in a very short time. Plainly speaking, the $2,499 you invest will be a distant memory as your hourly increases and pays for the course in all but a handful of sessions.

Phil Galfond’s This is PLO: Pros vs. Cons

Let’s be clear: Phil Galfond’s This Is PLO isn’t for the faint of heart. If you buy it then you’re committing to hundreds of hours of video content, thought experiments, and familiarization with new terms and concepts. You truly have to want to get better at your Pot Limit Omaha game and that isn’t for everyone. There is a purity to the game that will be stripped away and the notion that it’s “just a game that you can gamble on and get large amounts of chips in willy-nilly” will vanish. But then again, everyone around you will still have that notion and you’ll be left picking up the free money that sits down on a daily basis.

READ MORE: Phil Galfond Discusses This is PLO, His First Ever Full-Length Course for Run It Once 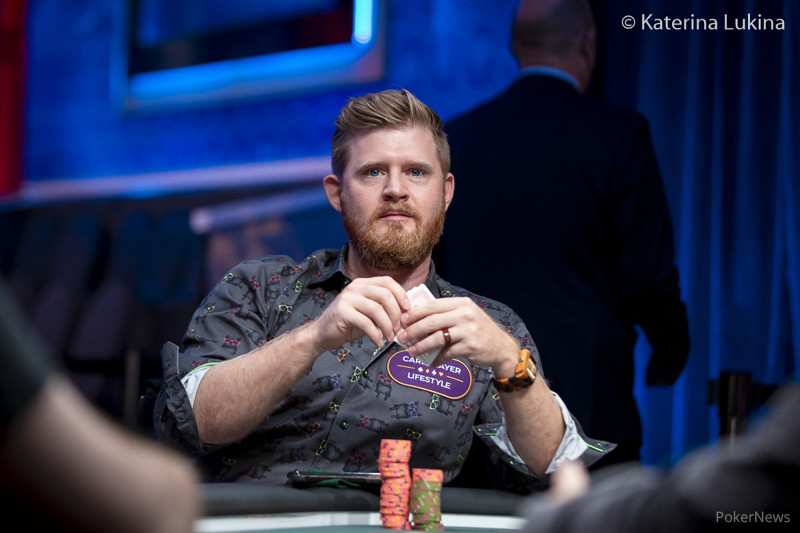 Nathan Gamble is a native of Texas where he learned to play hold’em from his father. He is a two-time World Series of Poker bracelet winner, having won the 2017 WSOP $1,500 pot-limit Omaha eight-or-better event and the 2020 WSOP Online $600 PLO eight-or-better event. He is a fixture of the mixed game community and […]