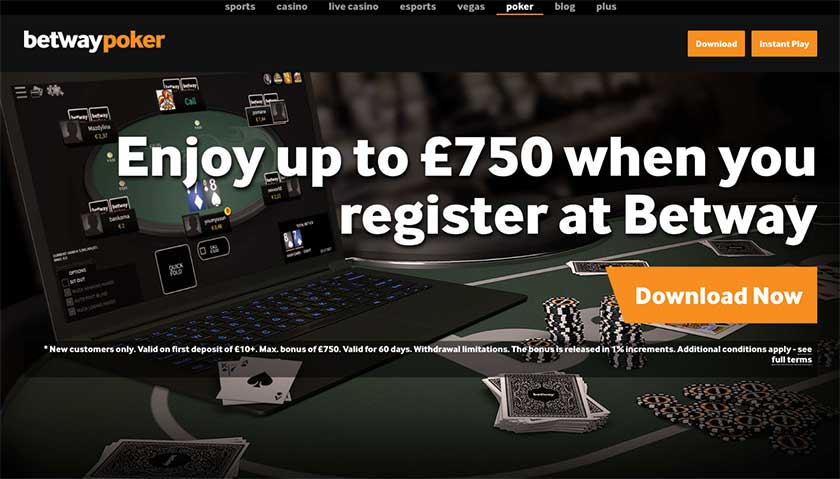 Despite being relatively new to the online poker scene, Betway Poker offers a good deal of features that players would find on more established brands. Owned and managed by The Betway Group, this poker room only started its operations in 2014. As for the company, it was established nearly a decade earlier, in 2006. However, the company took a long time to get its online operations started. To be precise, it took until 2013 for The Betway Group to offer a casino gaming experience.

For its poker software, Betway Poker currently makes use of Microgaming’s poker room solution. As for as our research into the poker room goes, its affiliation with the Microgaming Poker Network can be traced back to its inception in 2014. 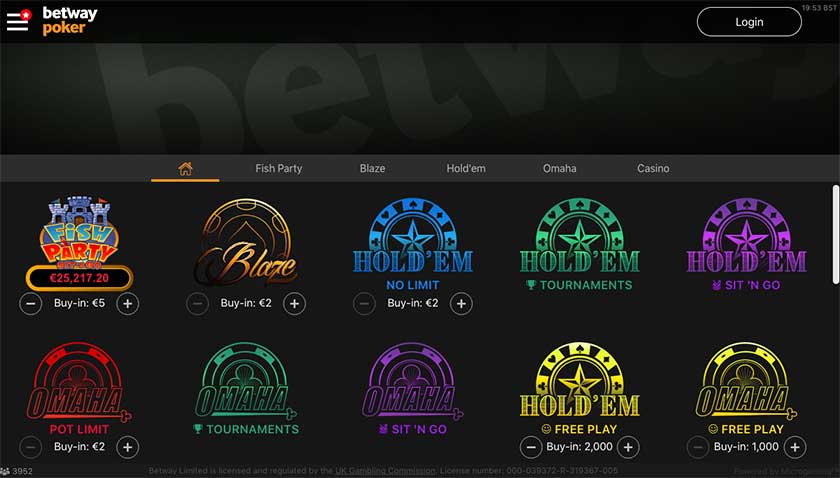 Betway Poker has largely stayed away from sponsoring or affiliating itself with popular live tournament series. A big reason for this would have to be the fact that they’re kind of the new kid on the block, and aren’t looking to make a huge splash. The competition in the online poker vertical is as fierce as ever, even though we’re no longer in the industry’s boom years. Considering this, it’s perfectly understandable for a new player like Betway Poker to focus instead on the online crowd rather than to go all out with promoting/sponsoring live tournaments. Still, this lack of live tournament counterparts shouldn’t deter players from enjoying what the poker room has to offer.

Betway Poker offers plenty of daily Texas Hold’em tournaments with relatively low buy-ins. Examples of these include Turbo Monster Rebuy (which has a €250 guaranteed prize for a €1.10 buy-in), €75 Super Turbo Freezeouts, Booster tournaments that have €150 guaranteed prizes, Morning Madness tournaments, and Mini Highlanders, just to name a few. Players can typically expect to shell out anywhere from €0.55 to €3.30 in order to enter the above-named tournaments.

If they’re already comfortable in their skills, then players would do well to join tournaments that offer exponentially higher guaranteed prizes. Some great examples of these tournaments include (but aren’t limited to) Nightly Turbo Rebuys, River of Riches, Lucky Firecrackers, Max Damage tournaments, Lunchtime Specials, regular Highlander tournaments, Cashville, Big Breaks, Sunday Mosh Pits, Red Hot Devils, Hot as Hades, Mount Olympus, as well as Daily Mosh Pits and Mini Mosh Pits. Buy-ins for these tournaments usually start out ata very affordable €5.50 and max out at €22. The relatively higher buy-ins mean that there’s plenty more cash up for grabs for those who manage to make their way through the gauntlet into the money, the final table, and the winner’s circle. The aforementioned tournaments carry guaranteed prizes that typically range from €500 to €5,000, or in the case of Mount Olympus and Sunday Mosh Pit, €10,000 to €15,000, respectively.

Aside from Hold’em, players can also check out other poker variants such as Blaze, Omaha, and Fish Party. Blaze and Fish Party have set buy-ins that range from €1 to €50 for the former and €2 to €50 for the latter. The Omaha action on the site is comparable to any industry competitor, with the caveat that Betway Poker holds relatively fewer online Omaha tournaments. With that said, the tournaments that it does hold (Super Turbo Freezeouts, Try Omaha, Omaha Rebuy, Turbo Bounty, and Omaha Mondays) all feature low buy-ins and moderately good guaranteed prizes.

Regardless of the poker variant/format, it’s still possible for anyone to improve their skills at Betway Poker at no cost whatsoever, thanks to tournaments they spread with play money stakes. Much like regular tournaments, these are available on a regular/weekly basis.

In accordance with it’s lack of involvement in the live poker tournament scene, as of this writing, Betway Poker has not sponsored any poker professional to represent the brand in tournaments or other live events. With that said, it should be noted that the brand is more than capable of sponsoring poker professionals. In fact, the Betway brand currently boasts of sponsorships/partnerships with e-sports teams like Ninjas in Pyjamas, MiBR, and Invictus Gaming. Additionally, it has had a longstanding partnerships and sponsorships of football teams such as La Liga’s CD Leganes, Levante UD, and Deportivo Alves, Serie A’s AS Roma, and the EPL’s West Ham United.

So, if and when the time warrants it and Betway Poker chooses to get involved in the live poker scene, it certainly has the resources at its disposal to make a big splash as well as sponsor some pros.

Upon registration of your online poker account at Betway Poker, you’ll be provided with a generous 200% match bonus that can go as high as £750. As with most poker rooms, the bonus isn’t given outright. Instead players will receive the bonus in increments once they play through the poker room’s wagering requirements. As of this writing, players need to earn 100 loyalty points (which the poker room gives out at a rate of 10 loyalty points for every $1 that players pay in rake/fees) in order to get $1.50 in bonus cash.

In addition to this first deposit bonus, the poker room also offers freeroll tournaments for new players. After registration, players can expect to be invited to six weekly New Player Freeroll tournaments that boast €1,000 in guaranteed prizes. On top of this, the poker room will also invite new players to six weekly New Player Turbo tournaments that feature guaranteed prizes worth €500. That means that players new to the site have the opportunity to win thousands of euros worth of prizes within the first few weeks playing in the room!

Players should have no problems when it comes to accessing Betway Poker, whatever device they use. The poker room is readily available either through a dedicated poker client or a regular browser on desktops/laptops running Mac and/or Windows. It’s also relatively easy to gain access to the poker room on mobile devices. For players who want to access the poker room on the go, all they’ll need to do is use a browser that supports HTML5/Flash on a mobile device running iOS, Windows phone, and/or Android.

Betway Poker is mainly targeted at players in the UK and Europe. As such, the poker room has licenses to operate issued and regulated by both the UK Gambling Commission and the Malta Gaming Authority. As with most brands, players based/residing in the United States of America won’t be able to access the poker room.

As mentioned at the outset of this review, The Betway Group was founded back in 2006 but only really made its mark online a few years later in 2013-2014. Since that time, the company started expanding its operations online with the debut of Spin Casino and Hippodrome Casino. In addition to these, promotions for the brand also began to increase through sponsorships of events/competitions such as Premier League Darts, the Queen Mother Championship horseracing at Cheltenham Festival, and the super-middleweight title fights between Carl Froch and George Groves.

2015 saw increased activity from the Betway Group in terms of promotions as well as with launches of new products/verticals. The company became the official sponsor of EPL side West Ham United and also signed on Rugby Legend Mike Tindall as a brand ambassador. With the growing popularity of eSports, the company wasted no time in launching its own eSports product. Aside from being granted additional licenses to operate, Betway also became a member of ESSA and IBAS (Independent Betting Adjudication Service). Another milestone the company achieved that year was winning ‘Best New Online Bingo Operator’ for its Betway Bingo vertical at the WhichBingo Awards.

With over 600 employees, the Betway Group continues to grow on all fronts. Its Betway Sports brand now boasts of covering odds for over 190,000 events across 50 sports. The brand has also moved to further increase its brand recognition with a number of sponsorships. In Spain, the brand has agreed to sponsor La Liga teams Leganes CD, Alaves, and Levante U.D. Not content with just La Liga teams, the company has also gone into sponsorship deals with Serie A side A.S. Roma and Bundesliga teams Hannover 96 and Fortuna Dusseldorf.

What does any of that have to do with their online poker offerings? Admittedly not much. However, it does serve to illustrate to you the powerhouse company that’s behind the Betway Poker brand. Again, should they ever decide to invest additional resources into promoting their online poker room, their task would be to make inroads against the competition of currently larger rooms and they certainly have the resources to do so.

Answer: Much like a lot of the poker rooms targeted at players residing in Europe, Betway Poker doesn’t have a license to register US players. As of this writing, the poker room is mainly marketed at players from the United Kingdom, Germany, Denmark, Norway, Sweden, France, and Portugal.

Question: Does the software allow for playing at multiple tables simultaneously?

Answer: When using the Betway Poker dedicated poker client, players will have a chance to join as many as 10 tables simultaneously. This feature works regardless of the poker variant/format, buy-in, or number of opponents at each table. It should be noted, however, that multi-tabling support is limited to the poker client. Players who want to play multiple tables will be out of luck and limited to just one if they’re on Instant Play or mobile.

Answer: Players who want to get more value for their deposits will love Betway Poker’s VIP/Loyalty Program. For every $1 in tournament fees or rake generated, players will receive 10 Poker Loyalty Points. These points are then going to be needed in order for players to claim their bonuses from the poker room’s welcome offer (discussed below).

Answer: Betway Poker’s welcome promotion will give players a 200% match bonus that can go as high as £750. As with a lot of poker rooms, players won’t receive this bonus outright after their initial deposit. Instead, the poker room will distribute these out in 1% increments. To get these bonus funds, players need to earn the Poker Loyalty Points mentioned in the answer to the previous question. As of this writing, 100 Poker Loyalty Points equals $1.50 in bonus cash. If they take full advantage of the welcome promotion and get the maximum bonus amount ($750) then this means that players will need to accumulate 500.25 Loyalty Points for the poker room to release the 1% ($7.50) bonus increment.

It should be noted though that the amount of Poker Loyalty Points needed for the release of a 1% increment will differ based on the player’s currency. As an example, players who want the max £750 bonus amount will need to get 763.05 Loyalty Points for the poker room to release a 1% increment. This accounts for the higher value of the British pound against the US dollar, with calculations based on the respective values of these currencies at the time of writing. Another important feature of the welcome offer that needs to be noted is the fact that players are only given 60 days from their initial deposit to clear the entirety of the bonus.

Answer: Unlike most poker rooms, Betway Poker provides its players with a selection of video slots and table games that they can enjoy if they want a change of pace from their usual poker fare. So, in a way, players should be able to use the bonus from their welcome offer to avail themselves of other non-poker offerings. With that said, variety is going to be an issue with the poker room’s casino section. The casino games selection is rather limited and while there are table games, there are no live dealer titles nor a sportsbook. Instead, Betway has its own dedicated Casino and Sportsbook that are separate from the poker room. For these, players unfortunately won’t be able to use the poker room welcome bonus they receive from their initial deposit. By the same token, players who get welcome bonuses from the Casino and Sportsbook sections won’t be able to use these on the poker room.