Cardplayer Lifestyle founder Robbie Strazynski recently mentioned that he would love to have me in his home game sometime, but he suspected that I would be a nit at the tables. I am proud to admit that in many home games I tend to nit it up, especially compared to other players.

I wouldn’t call myself a protégé of Allen Kessler, but I would say that I have some Hellmuthian tendencies (minus the ability to win bracelets and millions of dollars).

Every home game is going to have their share of nits from time to time, but the reasons they are playing nitty aren’t always the same. Here are a few reasons why your friend is being a nit in your home game.

They May Be New to Poker

Newbies to poker tend to flock towards one extreme or the other; they either play way too many hands or they stick to a strict nitty style. A lot depends on whether or not they have been “educated” prior to sitting down in your game.

By “educated” I mean that someone has given them a very basic strategy and they are sticking to it like gospel. When they see other players make what seem to be crazy moves, they either peg you as a bad player or they throw their education out the window and start playing any cards they feel like.

I’ve seen it happen both ways and, if you play in home games where new players are added regularly, you’ve probably seen it too.

I remember this one that guy would come to our home games every two or three weeks and had exactly $30 to play with. He’d either play the tournament and go home if he busted or he would wait until the cash game.

Regardless of which he played, he was one of the tighter players at his table and that was because his $30 was the only money that he had to play poker with. If he lost that, he couldn’t play again until he put back a few bucks from his paycheck to play.

I can’t remember a single time where he made a move without a hand. He was probably one of the only players in the game tighter than I was.

They Are Adjusting to Live Poker

The one guy that turned out to be the best player in our home game was a former online poker player who decided to transition to the live game. He had a goal of eventually playing in the World Series of Poker (something that Robbie has still yet to accomplish, by the way).

I used to watch him play poker online and he was the poker boom’s version of a lagtard. However, when he played in our home game he was largely a nit. Early on, he admitted that he did this because he was adjusting to the live game and getting a feel for the game. His other reason leads me to my final point.

Both my friend and I were easily the two tightest players in our home game. We also happened to be the two most consistent winners. Over the course of four seasons of tournament play, we always ranked 1-2 for money won.

How could we get away with playing so tight and still win? Everyone else REALLY sucked at poker. Out of a group of 15–20 who were regulars, there were maybe three who had a game that was passable. Two of those players were useless once drunk, and they got drunk a lot. 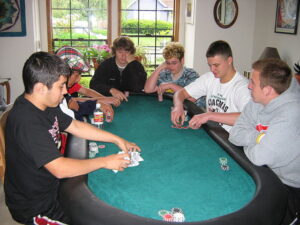 What’s bad is that everyone knew how we played and yet they still failed to make sufficient moves to counter our nitty style. Granted, both of us had a tendency to show some crazy winners. My favorite was to play Q-9. I can’t tell you how many flops there were where I took down pots only because the board contained a Queen or nine.

Both of us would discuss the games and we seldom saw a need to change our style, especially in tournament play. Did we grow much as players? Absolutely not, but we didn’t need to either.

Welcome Your Nits! It Takes a Village to Run a Successful Game

What I hate is how many poker players make nits out to be bad for the game of poker. While poker has changed dramatically over the last three decades, there’s still room in the game for all types of players.

Nitty players aren’t going to give you as much action, but if you’re changing gears and adjusting your game to counter their play, it shouldn’t matter in the long run. Home games are supposed to be all about enjoying the game and nits can enjoy the game too.

…and if you’ve really only got a problem with nits because you’re always losing to them (like Robbie), then learn to play better poker.