(G)AL’S Game: And Poker Shall Set You Free

You take one look at Gal Sont and you instantly realize that he is no ordinary poker player. His features reveal nothing; he’s got the perfect poker face. His eyes dart from side to side taking in the action going on around him, but other than that he doesn’t move a muscle.

Because it’s too painful. 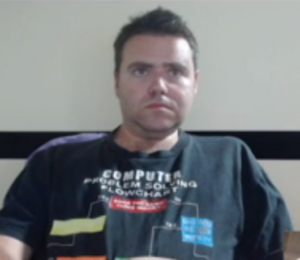 Gal and I worked together at a start-up company back in 2006, where he was in charge of software development as the Head of R&D. A highly skilled computer programmer with a degree in Mathematics and Computer Science, Gal was easily one of the most fun and carefree people in the office. His hobbies included snowboarding, motorcycling, and all manner of other extreme sports. 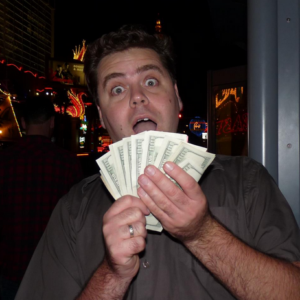 Gal joined my home game once in a while, when he wasn’t grinding for hours on end at the office or spending time with his wife and two little girls. After we both left the start-up in 2007, Gal and I remained in touch thanks to poker.

In 2009, Gal joined our small local tournament series, organized by my friend Shimi Weiss, which we all charmingly refer to as the WPT; the Weiss Poker Tour. Unbeknownst to us, he had already been diagnosed with ALS. We only found out several months later.

Gal participated in the “WPT” for four successive seasons until he decided to reluctantly pull out in the middle of the 2013 series. He said that though he was still able to drive back and forth from his home, about 15 minutes away, he simply couldn’t concentrate for extended periods of time anymore because of the pain he was in.

While his muscles continued to atrophy and as he slowly lost control of his limbs, Gal’s brain continued to fire on all cylinders. In what could only be described as a Eureka moment, Gal came up with the revolutionary idea to develop an eye-movement-powered on-screen keyboard. 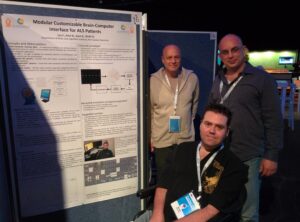 Gal receiving an award for his virtual keyboard

In 2013, along with his lifelong friend Dan Russ, Gal co-founded Click2Speak, a company whose raison d’etre is to enable individuals with severe physical impairments to continue communicating with the world around them.

Gal is no longer able to speak and is confined to a wheelchair, but that hasn’t stopped him from continuing his work. When no longer able to use his hands to code new features, Gal was seamlessly able to keep going by transitioning to the virtual keyboard he had developed. To be sure, it’s a far more deliberate and painstaking process to code exclusively with one’s eyes, but his unabated perseverance and determination is winning that battle. This incredible story was chronicled by the BBC.

Yet, for all of Gal’s groundbreaking achievements away from the poker table, he was just that… away from the table. We missed him.

A Chance Encounter Morphs Into Something Special

When Gal was diagnosed, he knew that it was only a matter of time before his physical condition would deteriorate significantly. He decided to make the most of his time, traveling with his family to a number of destinations around the world to create as many memories as possible. Even now, though it’s much more of an effort, Gal and his family continue to go out regularly and enjoy life together. On one such instance, they bumped into Shimi’s family at a bowling alley.

Following their chance encounter, Shimi reached out to Gal on Facebook: 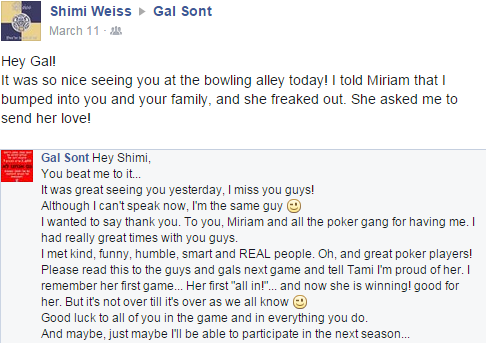 After that exchange, Shimi approached a few of us local players and asked if we would consider participating in an online poker tournament together with Gal. While the desire was there, unfortunately, with all of us having busy schedules (full-time jobs, little kids at home, etc.), it was pretty much impossible to coordinate a time where we’d all be available to play simultaneously on an online poker site. Add to that Gal’s unique circumstances and it seemed like an online poker tournament was a no go.

Then, Shimi thought up a brilliant, creative solution. He volunteered to be the “virtual dealer” while his wife Miriam, myself, three other players, and Gal would be able to play out the game… on Facebook.

On March 12th, Shimi dealt the first hand of our “Facebook Invitational”.

How We Played Gal’s Game 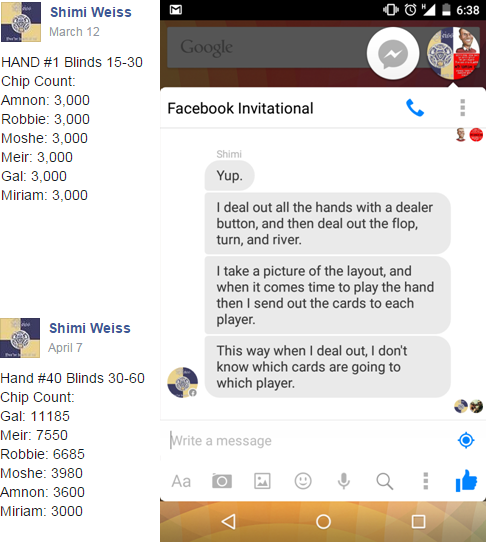 We agreed to a buy-in of $10 with unlimited re-buys for the first 60 hands. Blinds would go up every 10 hands. There would be no tournament clock and tagging would be used to notify each player of their turn to act.

The money was immaterial though. What mattered most to us all was the table banter. Action proceeded via Facebook comments, while non-hand discussion took place in a separate dedicated thread. Gal’s virtual keyboard allowed him to participate and his bubbly, lively personality shone forth, just like old times. It was incredible. 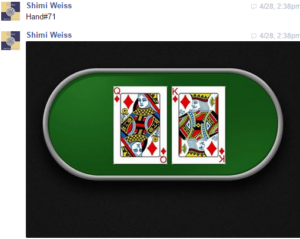 This is how Shimi originally sent us our hole cards; later on, Gal would devise a way for us to receive them automatically via email

As we’re all friends, we trusted Shimi implicitly. After all, it takes a special person to volunteer to do all the legwork (without even getting to play!), including:

Shimi downloaded a deck of card images and just made the magic happen: 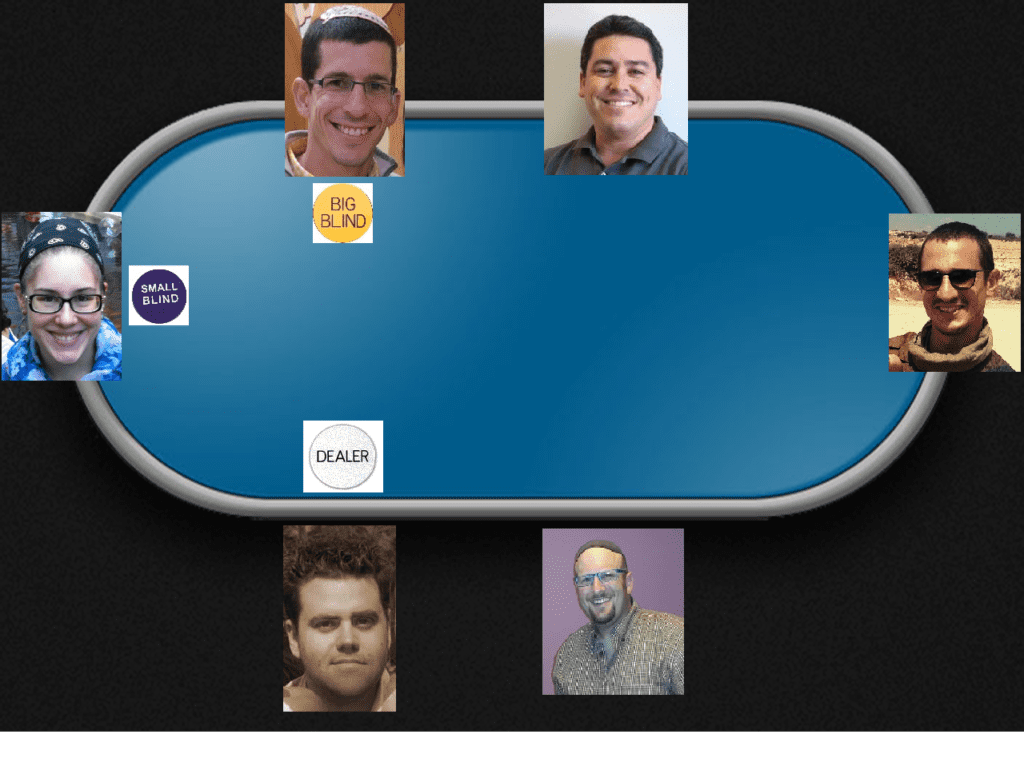 The six players who started off playing Gal’s Game

Before the re-buy period ended, two additional players joined our table, one of whom was Gal’s friend Avichai, who also suffers from ALS. Our tournament included plenty of exciting hands, but what will remain etched in my memory forever are the good laughs that we had, especially when Gal made comments like “lol” and “I can’t stop laughing”.

A few weeks into the tournament, Gal astounded us with the following news: 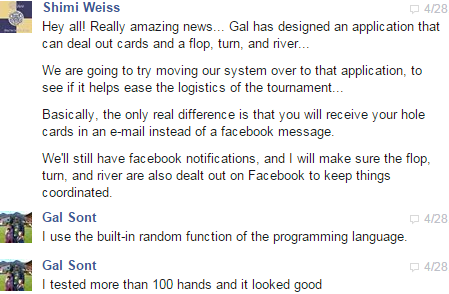 I was the first player to be eliminated and eventually Gal was, too. Nonetheless, play continued within the Facebook format until heads-up was reached, in the tournament’s 156th hand, when the final two players met in person to crown a winner.

Looking back, there were plenty of notable moments during the tournament, but it was pretty much just like any other online poker tournament. Except it wasn’t…

This was an ALS game. This was (G)AL’S game.

A Poker Player Who Just Doesn’t Know How To Fold

I first wrote about Gal last summer, in the midst of the viral ALS ice bucket challenge campaign. Since then, he has outdone himself yet again. Gal was just featured again on the BBC a couple months ago, this time exhibiting the mind-blowing ability to control a “seeing robot” with his eyes, thus enabling him to virtually be present at events taking place outside his home.

This incredible, remarkable man continues to innovate, communicate, and make a difference in our world.

And he can barely move a muscle. 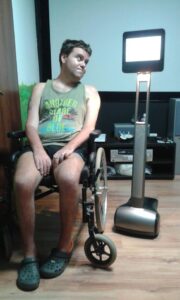 Just a couple days ago, to honor and support Gal’s heroism, I took part in a group running fundraiser event to support the battle against ALS. The disease is about a lot more than just ice buckets and viral marketing campaigns. It’s about celebrating life, obstacles be damned, and fighting to keep on celebrating.

Gal and his wife were there. We took a beautiful picture together. I didn’t tell them that, as I powered down the 4.2 km path, my eyes were “sweating” along with the rest of my body. 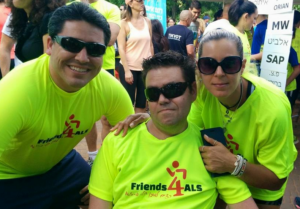 I’ve long lost count of how many tears I’ve shed thinking about Gal. Somehow, he and his family are the strong ones, boldly, yet humbly, continuing to inspire.

You take one look at Gal Sont and you instantly realize that he is no ordinary poker player… for he has triumphed in the greatest game of them all.

Editor’s Note, May 16, 2016: It is with deep sadness and regret that I inform you, dear reader, that Gal passed away last night. The story I relayed above is just one of hundreds, if not thousands, illustrating what an amazing person Gal was. May his memory be for a blessing.

To learn more about ALS and/or make a donation:

Thank you so much for reading Angela. Please share with your friends; Gal’s story deserves as much exposure as possible.

Today, June 21, is the international ALS day. I salute you for keeping this story featured on the homepage year-round so people can be exposed to this amazing story. It was painful to hear Gal has passed away but his memory lives on through these amazing stories. Regards, Alon

His memory will live on in my heart forever.