Here’s How YOU Can Get U.S. Online Poker Legalized

If everything you’ve read on this poker blog about Full Tilt Poker over the last couple weeks hasn’t convinced you that legalization and regulation of online poker in the U.S. is a must, then watch the American Gaming Association’s video for some inspiration to act.

That being said, there are 2 ways for fans of online poker to take action and change the current situation:

Acting on a Macro Level: Making Online Poker Legal in the United States 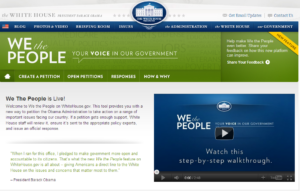 The White House has set up a new online platform called “We the People”. This platform is meant to help American citizens voice their opinions on what they’d like to see from their government via grassroots petitions.  One of the first petitions to be created was to “protect consumers, create jobs and generate revenue by licensing and regulating online poker”.

You don’t even have to be a U.S. citizen to sign the petition (you just have to be at least 13 years old)! So, wherever you are in the world, you can help get regulation passed to make U.S. online poker legal. Naturally, the more signatures on the petition, the more likely the White House will be to take the issue seriously and respond in kind, hopefully with action as well as with words.

Americans and Canadians Might Get Money Back from Full Tilt Poker

Has your money been frozen in a Full Tilt Poker account since they disappeared from online poker? Well, the Cardplayer Lifestyle poker blog has some information for you that might help you get your money back:

I think your last sentence sums it all up. We may approach the analysis a little differently but the fact that Zynga is not going to be the new 800 lb Gorilla seems to be our common ground.