Women in Poker: A Senior’s Perspective

“Women in Poker” has always been a topic of considerable interest, and it’s not just because they brighten up the atmosphere at the table. Many women do play poker but the numbers are relatively small compared to the men, at least in casinos. Why is that so?

The WPT Women’s Poker Summit was held on August 26 at the Bicycle Casino & Hotel in Bell Gardens, California. In introducing the event, Poker Hall of Famer Linda Johnson noted that in four decades of the World Series of Poker, female participation has gone from something like one percent to four percent, still a pretty dismal number.  She asks: “What are we doing wrong?”

On October 12, the Los Angeles Times published an op-ed by Gerrie Schipske entitled “Why We Should Teach All Girls to Play Poker. The author, who teaches management and leadership in the healthcare administration department at Cal State Long Beach, notes the “explosion of interest in the game – due in large measure to televised poker tournaments.” Despite this and the fact that “seedy, smoke-filled card clubs have been replaced by shiny, glamorous, smoke-free poker rooms… it’s still mostly a male arena.”


Meanwhile, Ante Up magazine ran a column in its October 2018 issue written by Lena Evans – CEO of Helix Poker and co-founder of the Poker League of Nations, PLON. She, too, had attended the Women’s Poker Summit and observed that the focus was on why more women don’t play poker. By no means are “sexual harassment and intimidation” the reasons, she says. According to a recent survey, “lack of funds was the top reason” – at least for poker tournaments. To resolve that issue, plans are afoot by PLON to enable women to buy in to main events for a fraction of the price.

From my own observations over my many years playing the game, in live poker rooms around the world, you will see anywhere from zero up to three (never more) women seated at a full table of nine. Perhaps they’re just more comfortable playing online from the comfort of their homes and figuring out how to maximize their bankrolls by how to choose a casino bonus?

For a better understanding of the issue, however, I’ll present some factual evidence: Years ago, I helped create the seniors’ poker group at the Claude Pepper Senior Center in Los Angeles. Each player donated a small sum of money, used for refreshments and prizes. We also offered poker classes at the senior center, with participation of some top poker celebrities. There were also poker classes for seniors being held at West Los Angeles College and a local country club. Membership in the seniors’ poker group soon grew to over 200 men and women. Examining the membership list of May 2012, it turns out that 103 of the members were women; exactly the same number as men! States another way, there was no difference in participation based on gender! 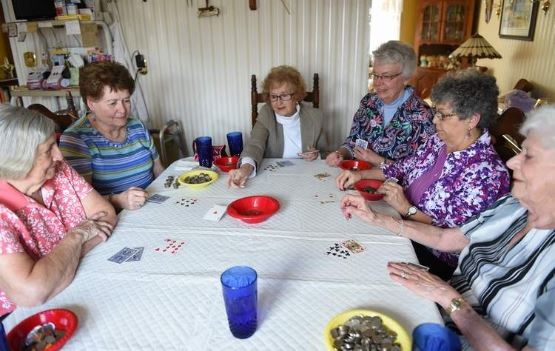 The question, then, is why? Admittedly, I speculate: All of the players – men and women – at the senior center and in our classes played for recreation, mental challenge, and social engagement. On the other hand, winning money is the primary objective of the players in the glitzy poker rooms. As a rule, and this has been proven in academic studies, males are more inclined than women to gamble and risk their hard-earned dollars (or pounds, euros, etc.)

Poker is obviously still very popular among women in the US, but of course female senior citizens have plenty of other pastimes that they enjoy and that help keep them leading busy and interesting lifestyles. For instance, online casinos are becoming increasingly popular with this demographic. In Great Britain, especially, women flock to the best online casinos in the UK, while online bingo has long been popular among seniors (both male and female) due to its simplicity and the fact that you’re never usually wagering too much money while having the chance to win large jackpots.

Of course, casino games and online bingo do not require anywhere near the same level of skill and mental fortitude as is required when playing poker. To point, acclaimed poker psychologist Dr. Al Schoonmaker has written many times about how a vast amount of research indicates that poker is among the games/activities that help prevent Alzheimer’s (as opposed to simpler gambling games). While this article focuses on women, it goes without saying that based on the research both men and women can benefit from playing poker into their golden years, at least as far as their mental health is concerned.

In any event, with all of that said, the PLON approach towards bringing more women into the game of poker could be a good first step. May I also suggest the approach that worked so well for our senior citizens poker group.