What the Flop? | Welcome to the Thunderdome

I kept my eye laser-focused on the guy in front of me with the backpack. He cut a hole in the throngs of tourists at the Paris, who were milling about with no apparent plan or purpose other than having huge containers of alcohol strapped around them like a cross body purse, taking pictures in front of the Vanderpump Lounge, or gloriously lost in the way you can only be in a casino.

My backpack guide navigated all of the stimuli, lights, sounds, smells, distractions with a singular purpose. His mission was to get to his poker table, either losing track of time vlogging about his progress, or going to sleep at 5am after a great session of cash game poker that morning and forgetting to set an alarm and being woken up by friends with 10 minutes to get to his table.

I’m following him until I reach the Thunderdome, which is now located for the first time in Bally’s Event Center. I start my journey at the Paris, and sometimes he breaks away at the Paris location of the WSOP, leaving me to be my own backpack guide on to Bally’s with a fierce, determined look on my face with sweat starting to migrate down my back, my “official” media badge swinging to and fro around my neck. My mind is blank for once, at times singing to myself (internally because my singing voice sucks) “Move B*tch Get Out the Way” by Ludacris as I’m trapped for a few moments by excited tourists that have no understanding that I am about to pass them in a tiny space to their left. 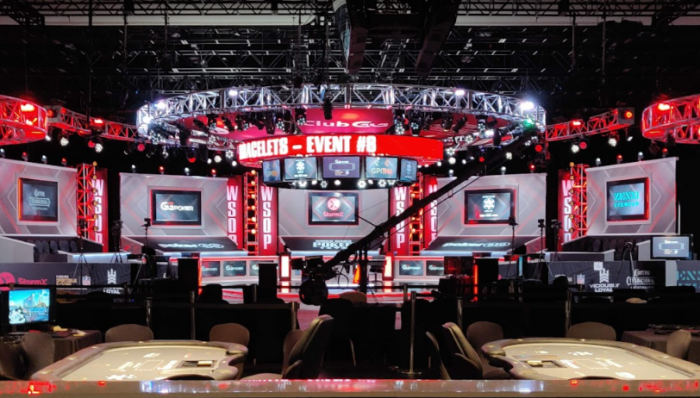 I turn the corner to the Events Center, past the women selling massages, or salon products, that will learn not to approach me at that time of day. I trot up the stairs and I see it:  the Main Event’s feature tables, with Feature Table A dubbed “The Thunderdome”. There is an undercurrent of excitement at just seeing this table, knowing that soon, lives will change here.

It’s also darker in here, lending a hushed quality under the shuffling of chips, barely constrained testosterone and excitement. The tables set up for the tournament are more brightly lit, with stories contained at all of them, only a few that I will interview before the time is over.

I reach my corner, where I will sit for hours upon hours with my coworkers, singularly focused on getting what we need and translating that information to the live stream so we can lend shades of stories to players, humanize them, make them separate entities from their backpacks and chips. 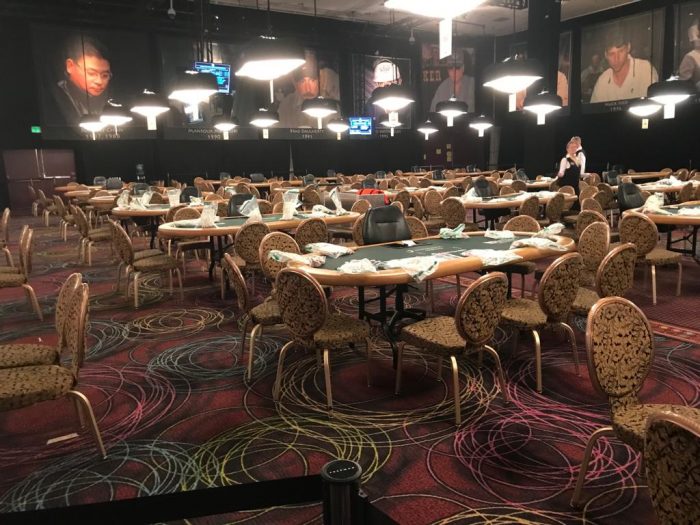 It is truly a bro-ternity, one that I joined excitedly and eagerly many years ago. I never knew if I’d work it again after the pandemic. I’d been in an insular bubble for years, and now would be thrust out of a cannon into another bubble, albeit much larger and without any idea how they were treating the pandemic, or if they still ate buffalo wings dipped in ranch at the table. It’s a bubble that used to be a contained world, that when I exited places like the Orleans poker room or the Commerce, I had the feeling like when I leave a particularly engrossing movie, fondly called, (by me) “movie head.” And yes, so many jokes, so little time. It took a while to readjust to being in the real world again. Much like many online gamblers head to sites like Kasinoranking for a fun escape, poker gave me a place to escape; to marvel at the carnival atmosphere surrounded by sweats, both pants and support to fellow poker players/partners.

I was nervous to rejoin until my best friend reminded me that talking to strangers was my super power. I don’t understand Geometry or basic directions, but damn if I can’t talk to near about anyone. I usually stopped at the Paris bathroom to put on my Atomic Blonde armor, the outward illusion that I was Zen, a calm sea in an ocean of craziness. Once I put my badge around my neck, it was ON. Let’s go mf’ers, and get the f out of my way…Namaste.

It was wonderful to see my poker tribe, people I hadn’t seen in years, or only met up to that point on Twitter or Facebook. Hugs abounded, even though I was wearing pants and a cashmere sweater most days. (I’ve learned it’s not prudent to wear dresses when I have to crouch beside mostly men all day.) I was thrilled to make new friends, have new jokes, laugh easily and often. The poker players were wonderful, interesting, kept me on my toes sometimes. I got to sweat Efi Litsou, our last remaining woman in the field who was delightful, then sweat Asher Conniff who is one of the nicest people, and go on to sweat “the Norwegian” because I’m part Norwegian. (Who ended up being the eventual winner, Espen Uhlen Jorstad) We all need someone to root for.

I realized at the end of it I was also rooting for myself, to be able to breach the imposed isolation for a long time, to be able to move to another bubble, even irritated when the “real world” poked its head in from time to time, which is inevitable. It took me so long to write about it because my “movie/poker head” lasted longer than I’d thought. I wanted to savor the fact that I can still kick ass, admire the live reporters and other production team that work harder than I ever could, I survived walking up and down the stairs of death outside Bally’s while wearing pants and a cashmere sweater, and I woke up ready to do it again.

For those of you who think the @WSOP Main Event is all GLITZ and GLAMOR, this is the staircase from our production trailers into Bally’s Event Center.

(Thankfully, I am in tiptop shape, so I walk up that staircase five steps at a time.) pic.twitter.com/18MJlLsT4w

People are now scattered, but for some, they’re already mentally preparing their backpacks, ready for another year of the Thunderdome, ready to survive in the world outside it, waiting for the summer to begin again.