What the Flop?: Street Cred

I’m squeezing a grapefruit in the produce section of my local grocery store and I hear a whisper behind me “Do you play poker?” I turn around and a little old woman is pointing to my hat, which I’d bought years ago at the WSOP. It was asked in a whisper so if I answered “no” she could fade into the background as if the question was never asked. “Yes I do” I answered, and then her voice switched to a louder-than-normal level telling me about how her husband loved to play at the Red Rock, but his luck was bad there. So I ask “where does he play that he does better?” a question that goes unanswered in the course of our conversation. I’ve had so many of these encounters when I’m wearing my WSOP merchandise, therefore aligning myself with anyone brave or excited enough to ask if I “play poker.” 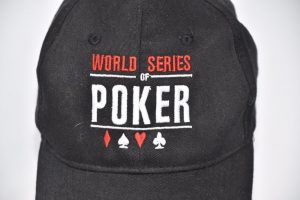 Every time I work at the WSOP I like to buy myself a “souvenir”, some trinket to remember my time there. My sweatshirts are like postcards to myself of events past, and the pure tangibility of them hugs the memory both physically and mentally closer. I remember how sad I was when the first sweatshirt I’d bought at the WSOP disintegrated in front of my eyes. To say it was well-loved is an understatement, like a grownup mimi or stuffed animal that you use until it’s reached its expiration date. 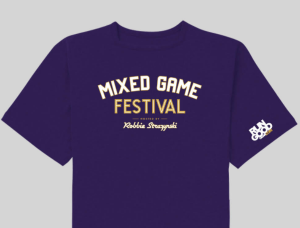 I also like to buy my family WSOP clothes, as they’re the OGs who originally loved poker to an unnatural level. They’re so supportive of what I do there and “invested”, unlike some folks who wouldn’t know the difference between a gambling movie review and a casino room review. The other day my mom called me right after the farmer’s market. (No, I don’t know if she was squeezing a grapefruit at the time.) She was so thrilled as she’d talked to the farmer who sold her peaches about the fact I worked in poker and had just had a meeting with Chad Holloway. “Peaches” was not a guy who was easily impressed, and usually dominated the conversation with my parents just there to witness what he was saying. “What, what?” he said flummoxed. “How, how?” My mom relished that moment as a proud mother, and one who also got him to shut up. They continued to talk, with his excitement palpable about this development of someone he hadn’t even met. They connected over peaches because my mom was wearing a WSOP hat that I’d given her.

READ ALSO: What the Flop: Walk of Shame

These clothes, these postcards of poker memories that we own, bring us closer to a group of people that we may have never met. I’ve found that most people want to connect, and poker can be a great connector in a world that’s more and more divisive and confusing. Anything that brings us together, especially something we’re passionate about, even if it’s the wife or husband of a player, the mother or father of a poker professional, gives us street cred. 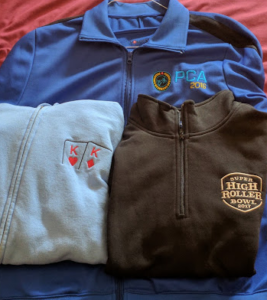 When I lived on Maui I got street cred in another way. This time it was from locals finding out that I’d lived on Lower Main Street. As soon as they found out, I got the internal or external head nod of “OK, you’ve got more of my respect now.” Living on Lower Main Street was an experience I would never, ever replicate, but that retroactive street cred helped me tremendously.

I don’t need that kind of acknowledgement from other people when I wear my hat, or sweatshirts, or carry my mugs. But it gives me a bit of that street cred to myself, that happiness that I was there, and these items found their way into my home, into my closet. When I look at a Cardplayer Lifestyle Mixed Game Festival T-shirt, it makes me happy because I met a good friend that day, met future coworkers, was surrounded by people that were intent on just having a good time. I also got to banter with the floor staff at Resorts World, who were amazing. Looking at the t-shirt brings some of those feelings back. And it’s ironic in a way, because I’m not that attached to things, but it’s more the memories than the thing I treasure. It’s being a part of a group, being a part of the world, the poker world. Most of the people I know in poker live in such far-flung locations. But, we’re still together, reaching out in different ways, with our clothes, on Twitter, or in person.

I’ll never know where that next conversation will happen, the produce section, or at a random store where I buy my coffee on my next road trip. But I know it’ll come, and I look forward to seeing the person’s face light up when I say, “Yes, I do.”