Is Trump’s Presidency Bad for the US Online Poker & Gambling Industry? 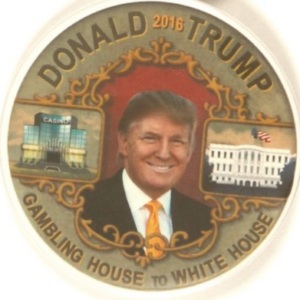 US President Donald Trump is a controversial character – to say the least. His extensive background in the casino business has many poker advocates and fans hoping that Trump will be good for the US online poker and gambling industry. However, while the man unquestionably is a fan of casinos and gambling, it’s uncertain as to whether his personal proclivities will affect the possibility of nationwide legalization or criminalization of the online poker in the US. In this article, we examine the potential positive and negative impacts of Trump’s presidency on the industry.

For years now, and throughout his Presidential campaign, Trump was known to tactically support online gambling. That said, his unpredictability means that what he said throughout his campaign cannot necessarily be taken as the truth. Trump may have enjoyed the thought of his name and brand being splashed all over Vegas and Atlantic City casinos, but this does not necessarily mean that he is ever going to push for legalizing online gambling and online poker on a federal level.

Before the political downfall of NJ Gov. Chris Christie, things were looking positive for the online poker industry. He was looking to head up Trump’s transition team, but got caught up in the Bridgegate scandal. However, Christie had signed NJ online poker and gambling legislation, meaning he could have been a variable in the federal legislation of the Restoration of America’s Wire Act (RAWA).

A couple of the biggest obstacles to Trump pushing for legalizing online poker and gambling on a federal level are some powerful members of his own party, i.e., Sen. Mitch McConnell and Rep. Jason Chaffetz. These two legislators have previously spent time advancing the opposition of online gambling and online poker. In fact, the two were key players in the Restoration of America’s Wire Act – federal legislation of a ban on online gambling everywhere in the US, whose fate is as of yet uncertain.

If RAWA is to be passed, it would have an immediate impact on the regulated gambling industry, as all forms of legal and regulated online gambling industries across the US, even in states which it is now legal, will be rendered illegal immediately. This would even have an impact on daily fantasy sports, as well as online poker and casino games.

How Do Things Stand Now?

It goes without saying that these issues pale in comparison to much weightier issues affecting the United States and the presidency, which are being discussed 24/7 worldwide.

On a lighter note, since Donald Trump became President, a number of fun Trump-themed games, quizzes, and ironic memes have appeared online, and some have even been created by online casinos, such as the Ladbrokes’ new Trump’s White House game.

For the time being, Trump has remained quiet on the issue of online poker and gambling, but the likely outcomes aren’t looking positive if he was to take a stance on this. Thus, the future of online poker and gambling in the US remains unclear with Trump as President. Perhaps at some point during his term, he’ll Tweet out something that will illustrate to the players in this issue where he stands precisely.