The PokerBROS Store Is Now Open for Business

PokerBROS is proud to announce the launch of their new online Store, making top quality gear with unique PokerBROS branding available for the first time.

Everyone following Team BROS on their recent expedition to Las Vegas will have seen them sporting exclusive PokerBROS merchandise. It hasn’t been available to anyone else – until now. 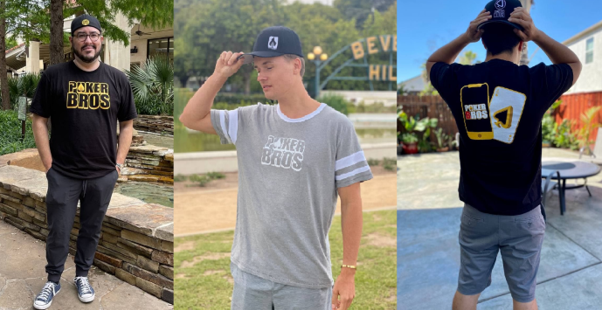 Eye-catching or understated T-Shirts, caps and hoodies in a variety of styles and colors can now be ordered for delivery anywhere in the United States. Stocking both women’s and men’s apparel from long-established providers RunGoodGear, our Store is the sole outlet for official PokerBROS clothing and accessories.

“We are thrilled to be working with PokerBROS on producing their new merchandise. They’ve built an amazing platform to deliver the game we all love.” says CEO of RunGoodGear, Tana Karn.

Team BROS Ambassadors Cedric Trevino, Alexander Wolfgang, and Kyle Kitagawa bridge the gap between the global network of friends and family playing on our app and the live poker circuit. They have been (very visibly!) representing PokerBROS at the tables in recent months, bringing their followers and online poker schools along for the ride.

The trio on Team BROS shared their excitement for the new store’s opening as well. Wolfgang said “It’s obvious that PokerBROS designed the hoodies with comfort in mind. I really like the green BROS hoodie, the designs are top notch. I’ve had a few people on the tables already notice and comment on my BROS merch.”

Kitagawa added, “The hoodies are super soft and comfortable and I really like the design on the T-shirts. My favorite is the one with the huge ‘PokerBROS’ on the front outlined in yellow. It really stands out and lets your whole table know that you either play on the app or have your own club. If you’re a club owner or agent trying to draw attention from potential players, this is a stylish and comfortable way to do it.”

Trevino also chimed in, saying “We all know how cold poker rooms are these days so it’s nice to have a comfy hoodie to warm up in. I am super happy with the weight and softness of the material. I am also a fan of the PokerBROS hats as I sometimes like to pull the brim down to hide my eyes from opponents.”

Now everyone, whether they are a PokerBROS reg or rarely-playing poker fan, can customize their outfits as easily as their online table themes. Open 24/7, the PokerBROS Store has no lines or pushy sales assistants, just cool gear for poker players, the way they want, when they want.