This is the third installment in our Great Poker Reopening miniseries.

I’m hard-pressed to accurately describe the mix of feelings I experienced on my way up to Ocean’s Eleven Casino.

The COVID-19 pandemic shut down most businesses in my home city of San Diego, CA in mid-March. Ocean’s Eleven, one of the area’s top venues for live poker, reopened on June 12.

A couple of weeks after that reopening, I made the 40-minute drive up to Oceanside to play live poker for the first time in months. Excited, but still somewhat apprehensive, I thought about what the poker room would look and feel like in the COVID era.

I told Cardplayer Lifestyle founder Robbie Strazynski that if the situation at the poker room made me uncomfortable, I wouldn’t sit down and play. Before I left, however, I took a look at the Ocean’s Eleven website:

This message, at the top of the Ocean’s Eleven homepage, reassured me that the poker room was taking the coronavirus crisis seriously.

IS PANDEMIC POKER A DIFFERENT GAME?

Another potential issue stayed in my head throughout the drive to Oceanside. I wear glasses and am near-sighted to the point that I can’t legally drive without corrective lenses.

The glasses and face mask combination isn’t working out well for me. My glasses fog up with every breath I take while sporting a mask, and I can’t find a way to wear both without my glasses slipping off my face.

I knew I’d have to find a way to make it work though, as my eyesight is bad enough that I might not be able to see the community cards in the Texas Hold’em game I’m about to play.

Was the mask/glasses issue going to affect my mindset, and would I play subpar poker as a result? I was about to find out. 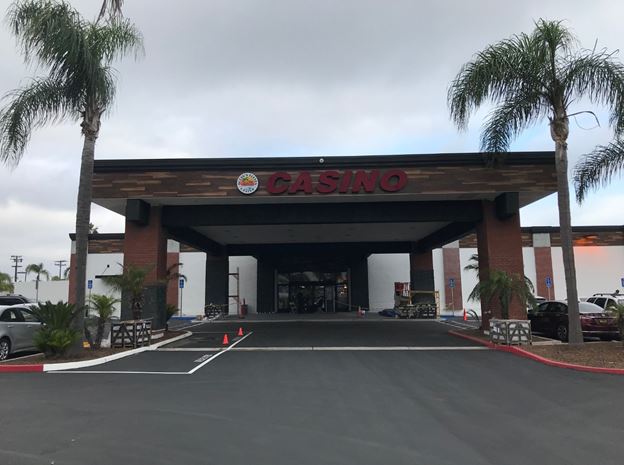 A NEW LOOK FOR OCEAN’S ELEVEN

A pair of security personnel at the front door took my temperature and asked if I had any symptoms of illness. After passing those two tests, they wished me luck and I was on my way to the tables.

I called in on the drive up and got on the list to play $2/$3 No-Limit Hold’em. I still had a bit of a wait after I entered the poker room, giving me time to soak in an atmosphere unlike any I’ve seen at a poker room.

Ocean’s Eleven remodeled the entire poker room during the COVID-19 shutdown, and the new look really popped. Safety protocols included plexiglass between each player, with hand sanitizer and gloves readily available throughout the room.

The mural displaying homage to the Rat Pack from the original Ocean’s 11 movie is still the artistic centerpiece of the poker room.

I chose a Tuesday evening to visit Ocean’s Eleven, and plenty of other players were on hand that night. My name was called after about a 15-minute wait, and I made my way to the $2/$3 cash game.

A GOOD NIGHT AT THE TABLES

The above photo is the last picture I took that evening. Once I sat down and touched my chips, I didn’t want to handle my phone again until after I sanitized my hands and left the venue.

I got myself a pair of blue latex gloves and sat down in the game. The fogging glasses issue followed me relentlessly throughout the session, but I got used to it and pretty much forgot about it until a big hand near the end of the session.

Not looking at my phone actually helped my focus, as I found myself watching every hand intently. Table talk stayed minimal at the table, but I knew within minutes that I sat in a good game.

My favorite player at the table sat two seats to my left and straddled every hand when he was under the gun. This led to him winning big pots with hands like three-two and ten-four offsuit, which didn’t sit all that well with players on the receiving ends of those beats.

I decided I’d sit for about an hour, take in the experience, and head home. I was three hands away from calling it a night and leaving with a $40 loss.

HELPED BY THE MASK?

Three hands remained until the big blind would hit me again, and I planned on standing up after playing that last under the gun hand.

Seven players sat at the table at that point, and the habitual straddler put out the under-the-gun straddle again, for $6. I looked down at pocket aces in the hijack and the pulse started ramping up.

I raised it to $20 and got one caller in late position. The straddler then three-bet to $60, and I started thinking about how long I should take to make my four-bet.

At this point I’m breathing heavier than normal and the glasses are fogging up, significantly. The good news is that the mask is obscuring my face enough that maybe these guys don’t notice any of my poker tells, in this instance my heart pounding out of my neck!

I wait awhile and raise it to $140, the late position player folds, and the straddler ends up flat calling. An eight-high flop comes out, the straddler leads out $100, and go all-in for my last $220.

I get the call, the board runs out two more low cards, and my aces are best against the opponent’s pocket queens.

As all of this is happening I’m thinking about how bad I am at hiding live tells. I guess it doesn’t matter when you get an aces versus queens setup against an aggressive player.

WOW! @oceans11_casino is open for action! A new remodel and same great staff at Ocean’s Eleven in Oceanside.

Friday was great over 18 tables open and ready for action!

The big hand busted my opponent, and I was sad to see him go but thrilled to pick up the massive pot. Not wanting to hit and run, I stayed for another 45 minutes. I came away with $363 in profit for the session.

A winning session always makes you feel good, of course. I was impressed with how Ocean’s Eleven approached the difficult situation of operating a live poker room during the COVID-19 crisis.

I headed back down to San Diego thinking that Ocean’s Eleven made live poker as safe as it could possibly be given the circumstances.

It’s back to the online poker streets for now, while I work on how not to make obvious physical tells when I have a monster hand. The trip to Ocean’s Eleven made it feel great to experience live poker again though.

Here’s hoping that the day is coming soon for poker rooms, and businesses of all kinds, to go back to normal operations.

On that front, California was met with some bad news the day following my trip to Oceans Eleven. Governor Gavin Newsom ordered the shut down of restaurants, bars, and several other kinds of indoor businesses in 19 counties across the state.

The shutdown order includes casinos and card rooms. Neighboring counties like Los Angeles, Orange, Riverside, and San Bernardino are among the 19 counties that will now once again shutter most non-essential businesses.

San Diego County isn’t on that list of mandated shutdowns, but the county took the initiative to close bars, wineries, and breweries that don’t serve food as of July 1.

I called Ocean’s Eleven, and as I write this on July 2, the poker room is still open for business. That status is subject to change, of course, and in the meantime I’m glad I got to visit while I could.

Geoff Fisk’s infatuation with poker began as he watched Chris Moneymaker go on his legendary run to win the 2003 World Series of Poker Main Event. Geoff took his first shot at online poker in 2006 and continued to grind it out on the virtual tables for the better part of a decade, before taking a break from the game in 2015.

Geoff worked as a tournament reporter for PokerListings at the WSOP in 2009 and 2010 and found that writing about the game was even better than playing! His favorite players to interview were Sam Farha and Daniel Negreanu.