This is the second installment in our Great Poker Reopening miniseries.

The world has never seen anything like the COVID-19 pandemic and its impacts on our everyday lives. Things that many believed would never be shut down – from majorly important things like government actions, higher and elementary education to lower importance matters like casinos and poker rooms – were closed to try and control the spread of the coronavirus. For the casinos, at the minimum, when they came back it was in force.

Closed on March 17 due to the outbreak of the coronavirus, the Seminole Hard Rock Hotel and Casino was one of the last operations in the state to shut down. One week later, every casino in the U.S. was shuttered, with the final outposts of casinos in Deadwood, SD, terminating the action. For a lengthy two months, there was no action anywhere in the U.S., save for (perhaps private live home games) and online poker, which exploded, with even many home game players moving their games online.

On May 21, however, that all changed. The Hard Rock Tampa became the first casino to open in Florida and the poker room surged back to life. Opening at 50% capacity that first night and with plexiglass dividers between the six masked players allowed at the table, within hours the players had filled the 23-table limit and the room boasted a waiting list that totaled at least 100 names. This has become the norm for the Hard Rock Tampa poker room since reopening, and the players still are hitting the felt. As capacity has expanded to 75% of the tables in the current phase of opening in Florida this last week, the tables are still packed with players. 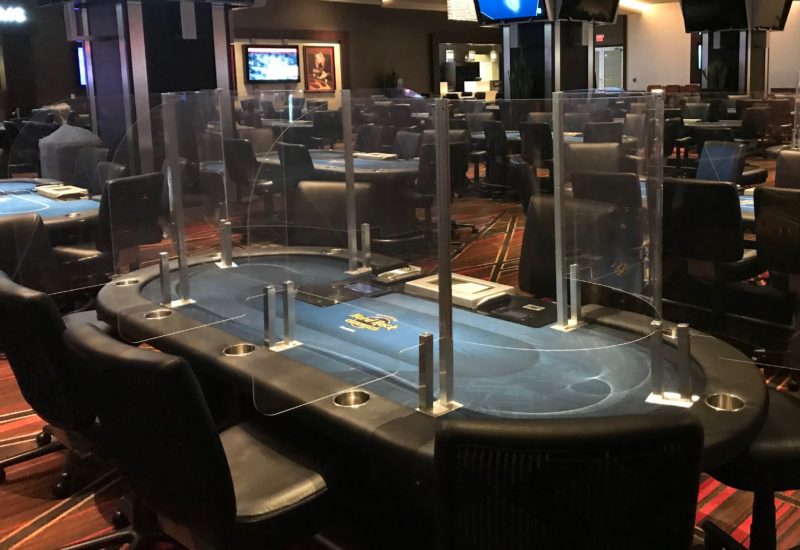 Plexiglass set up atop the poker tables at the Seminole Hard Rock Poker Room in Tampa, Florida

Here are the requirements for:

When it comes to poker tournaments, it is arguable that the North Florida poker rooms were first on the go for those types of poker games. First up was the Sarasota Kennel Club and their poker room, One-Eyed Jacks, which opened on May 22 and offered its first poker tournament the next day. Those initial tournaments were capped at 72 players, but they had people flooding the cage to get into the tournaments and they’ve been successful every weekend since.

St. Petersburg’s Derby Lane Poker Room has joined One-Eyed Jacks in offering tournaments for North Florida poker players. While they have an 80-player max limit on the tournaments, they are playing seven-handed and the tournaments, like those at One-Eyed Jacks, have been filled to the maximum. Both rooms have also been reporting healthy waiting lists with as many tables in action as allowed by the current guidelines from the state of Florida.

What About the Future?

The state of Florida is in a difficult position right now. Since reopening on Memorial Day, the state has suffered from an increased number of diagnosed cases of COVID-19. This is prompting many areas, such as Hillsborough County where the Seminole Hard Rock poker room is located, to enact mask ordinances to force all people to wear a mask when in public OR IN A BUSINESS in the county. This is being done to prevent the state from having to do something that no state is willing to reengage – the closure and quarantine of non-essential businesses, such as poker rooms.

The good news about the future is that poker is more than alive in Florida, it is flourishing in ways that many thought wouldn’t happen. The cash games have been thriving and are only currently held back by limitations on gatherings in the state. Tournaments, although they have their caps, are also doing quite well and showing that they aren’t going to dry up. The “demise of poker” isn’t happening, at least in the Sunshine State!

Cardplayer Lifestyle would like to thank Red Chip Poker for helping to make this miniseries possible. If you haven’t played much poker since the Coronavirus, enroll in CORE and (re)build your poker skills with the most comprehensive poker course ever created. Now with 200+ lessons, new quizzes, and new $2/$5 and $5/$10 hand reviews! Get started with CORE today for just $5.