Norman Chad is playing in the $25,000 HORSE Championship at the 2021 WSOP; Lon McEachern roots him on.

Norman Chad and Lon McEachern talk about the progression of poker on television since 2003.

In this episode of The Bernard Lee Poker Show on the Cardplayer Lifestyle Podcast Family, Bernard Lee interviews Norman Chad and Lon McEachern, the voices of the WSOP since 2003.

At the start of the interview, Norman Chad discusses his recovery process from COVID-19. Also, the dynamic duo talk about being nominated for the Poker Hall of Fame. Then, each recalls how they got started with the WSOP on ESPN. Both gentlemen play poker and they talk about their poker successes on the felt. To end Part 1, Norman Chad Talks about getting staked by fans on StakeKings for the $25,000 HORSE WSOP tournament where the markup will be donated to Hope for Depression charity.

During the second part of the interview, Norman Chad and Lon McEachern talk about the progression of poker on television since 2003 when Chris Moneymaker won the WSOP Main Event. They talk about the shift from taped post-production to live broadcasting. The dynamic duo then discuss their fellow broadcasters, from David Tuchman to Jamie Kerstetter. Then they reminisce about their top moments in the WSOP Main Event over the past two decades, including the November Nine. Finally, Norman Chad and Lon McEachern talk about the current WSOP transition from ESPN over to the CBS Sports Network. 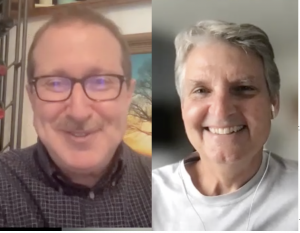