Four-time WPT champion, Darren Elias, was once the #1 ranked online hearts player in the world

“The more decision points you put them to, the more likely they will make a mistake” – Darren Elias

At the start of the interview, Darren talks about how he navigates large WPT fields and how play changes in the final two tables. He talks about how he got started in poker, including formerly being the #1 ranked player in online hearts. Darren talks about the struggles of transitioning from online to live poker. He recalls the effects of Black Friday on his life and bankroll. He also discusses the current online poker world including his relationship with BetMGM.

During the second part of the interview, Darren explains the use of the shot clock, called the “Action Clock”, in WPT main events. Darren talks about the “wild” poker play in Florida. He recalls his play in the 2022 Seminole Hard Rock main event, and strategies he uses when play gets down to the final two tables. “The more decision points you put them to, the more likely they will make a mistake.” Finally, Darren talks about his desire to win a WSOP bracelet, his prior close calls, and his “difficult” schedule based on his family life. 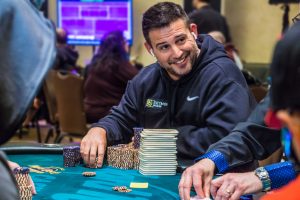