At the start of the interview, Adam discusses the expectation and pressure from winning the WSOP Dealer’s Choice tournament for a third time in 2021 and again this year in 2022. Adam talks about how he was thrilled to win the $10k WSOP Stud Championship and how personal it was to him. Stud was one of the first mixed games he played seriously in LA. Adam also discusses the nuances and strategies of seven card stud.

During the second part of the interview, Adam shares basic (and some more advanced) seven card stud betting strategies. Also, Adam offers his view of the WSOP move to the Las Vegas strip and Bally’s/Paris. Finally, Adam shares his thoughts on being considered for the Poker Hall of Fame. 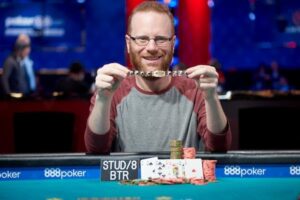