That Feeling You Get When Your Favorite Poker Show is Cancelled

Just over a year ago, I excitedly told you all how happy I was to begin presenting poker videos for PokerUpdate.com. Though doing so was a bit strange at first, I soon got to be quite comfortable in front of the camera. Together with my longtime friend Shimi “the Fish” Weiss, we produced 100+ videos over the past year. Unfortunately the plug has been pulled, with just the “Baller of the Month” videos, which I present on my own, being continued. 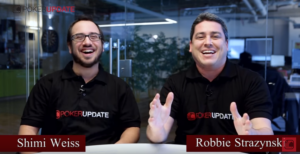 Shimi and I started off doing a show called the “Weekly Burn & Turn“, a sort of news/variety show where we covered the main topics going on in the poker world each week. With each passing week, he and I developed a better, more fluid rapport an on-camera presence. Our timing and segues got better, the graphics got better (thanks so much to Tal Azoulay, our supremely talented video editor!), and overall we got the sense that people were starting to notice our efforts. Episodes ranged in length from 10-20 minutes on average, and every so often we also got to include a fun skit or two, like a “Rocky Montage” or a faux “GPL Wild Card debate”.

About six months into making videos, we decided to break the show up into a few different, recurring “bite-size” segments ranging anywhere from 3-6 minutes long. These included:

We just filmed our final episode, which basically consisted of us looking back fondly on some of the highlights of our videos over the past year. Have a look:

Regular readers of this poker blog might be forgiven for thinking that all I’m involved in is poker, what with me appearing in all those videos, co-hosting the Top Pair Home Game Poker Podcast, and, of course, running this site since 2009. In fact, I work full-time as the Head of Content Strategy for the company that owns PokerUpdate.com, their flagship poker site. In addition, they’re also active in the casino online world, in sports betting, and other gaming and non-gaming verticals, so I’m plenty busy with that stuff as well. Anyhow, as I follow the poker world so closely, my company has been kind enough to let me pursue the poker video project as one of the on-camera presenters. Shimi actually doesn’t even work for the company; he came in once a week for about an hour to film the videos with me.

Of course, more time went into the video production that just that one weekly hour of filming. More often than not, we had some assistance from some PokerUpdate freelance writers in preparing scripts and thinking of ideas for the videos. The site’s Editor, Shira Steiglitz, made sure the videos got uploaded to the site and social media channels each week, plus she starred in a few videos as well. Then, of course, there was the editing, which made each show nice, tight, and graphically appealing for your enjoyment and consumption.

Video editing is something that’s probably quite underappreciated by most audiences. The fact of the matter is that without Tal working behind the scenes, our shows would be full or stuff, well, like this:

It Was Fun While It Lasted

I can’t help but admit how sad and disappointed I am to no longer be filming the shows with Shimi. While I understand that, at the end of the day, it was a net cost to my company, it sure was fun to produce new poker video content each and every week. As a matter of fact, it was my favorite part of my job.

It sucks when your favorite show gets cancelled. At the very least, I’m happy the project was green-lit in the first place. We can’t say we didn’t give it our best shot. Perhaps, at some point down the line, Shimi and I will team up again for a special video project or another poker show; time will tell. In the meanwhile, we’ll look into trying some different types of content over at PokerUpdate.com.

I just want to use this opportunity to thank everyone who tuned in to watch me and Shimi on screen. Whether you just saw one clip on Facebook or Twitter and smiled or were a regular subscriber on YouTube, looking forward to and sharing each new video, please know that I noticed and appreciated your support.