While poker used to be largely considered an American game, the modern game is global with players from every nation and every walk of life enjoying it. Many come over to the United States looking to earn poker glory.

Spend enough time in live games and you will meet many fascinating people. Below are a couple memorable stories from my poker travels involving foreigners. One involved a dealer just learning how to live in our country and another who thought he thought he could soul read me.

What a Crazy Game!

One of my favorite places to play live poker is the Los Angeles area. The reason is that you can usually find plenty of lower stakes action in Stud, Omaha Hi-Lo and sometimes even Stud 8 or Better. 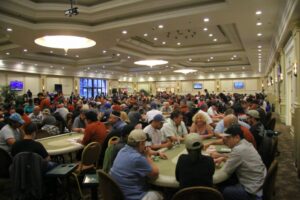 Poker at the Bike

I made several trips out to the Bike (Bicycle Hotel & Casino) between 2008 and 2009 to play in several of their small events such as Winning O’ The Green, Stars and Stripes and Big Poker Oktober. Anyone that played out there regularly probably has had to endure dealers with less than perfect English.

Once the dealer was up to speed as to which game it was, she dealt flawlessly. During a switch over to Omaha Hi-Lo, she said something to the floor person that made him laugh. I asked what she said and he said that she told him “this game she calls the crazy game.” I looked at the dealer, pointed to the cards and did the universal symbol portraying “crazy.” She smiled and we continued to play.

The next time Omaha Hi-Lo came around, I pointed to the cards and did the crazy sign again. She remembered and then dealt the right game after thanking me. After that orbit, she was pushed to another table but I saw the floor person start using my signal every time he announced a switch to Omaha Hi-Lo.

Normally, this would be the end of the story… but about a year later I was at the Orleans in Las Vegas for a tournament series and this seemingly random Asian girl sees me, runs me down and hugs me while asking how I was doing.

Apparently I has an utterly confused look on my face as she asked, “you don’t remember me do you?” Nope, I sure didn’t. She then told me how I was at one of her tables on the very first day that she was on the job as a dealer. At the time, she said that she didn’t speak English but I was very nice to her, especially during the “crazy” game.

At that point it clicked who she was and frankly, I was quit surprised as she was speaking nearly perfect English with only a slight accent. She thanked me for being so nice to her, gave me a hug and told me she would see me around.

I never saw her again after that point, but it drove the point home about why it is important to treat the dealers and casino staff with respect.

READ: Watch Your Language at the Poker Table

So What Part of Canada Are You From? 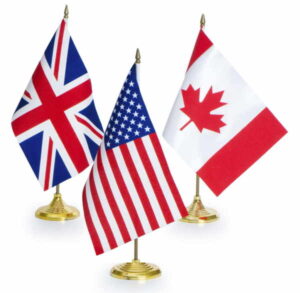 I was playing in a $3-$6 Stud 8 or Better game at the Hawaiian Gardens a few years back and this gentleman from England sat at our table clearly not understanding what limits we were playing. He knew we were playing Stud poker but he thought it was similar to blackjack and he could bet $25 or more on each card.

When we explained that bets on third and fourth street were $3 and bets from fifth to the river were $6, he laughed at us and actually called us silly Americans. To him, playing this game was a complete waste of time. He claimed that he made more money playing online blackjack in the UK in 10 minutes than we could in a week sitting at that table. Maybe he was right, but many of us playing low stakes limit games aren’t doing so to get rich.

He decided to play a few hands anyway until a seat opened up to a bigger NL Hold’em game. Someone asked me a question during a hand and after responding, he looked at me and said, “I’d bet $50 that I can guess which part of Canada you’re from.”

Slightly amused, I agreed and told him to proceed. He then gave a short speech how my inflection was such as people from Manitoba and that he assumed I grew up there but then moved to the United States in my late teens.

An older black woman was sitting at the table giggling at the whole thing and asked me, “you aren’t going to hustle him like that, are you?” I gave her a quick glance as to say “shhh!”

The English guy was confused at this point and I tell him that I not only was not from Canada but also have never stepped foot in Canada. “But you have a Canadian accent. How are you not from Canada?”, he asked.

The black woman looked at him and responded, “What part of Canada do they say y’all in?” This confused him even further.

You see, when he heard me talk, someone asked me about the 4-H camp that was advertised on the shirt I was wearing. My reply was “I’ll tell y’all about it later.” However, when I pronounced about, I often say it as “a-boat.” Instead of “out,” I often pronounce it “oat.” So when I am out and about, it sounds like I am saying, “I’m oat in a boat.”

He totally missed the clearly southern “y’all” in my statement that was a dead giveaway that I am from the south. I am from Appomattox, Virginia. For those who don’t know American History, that is where the American Civil War ended.