I’ve just returned from a lovely family holiday in Bulgaria. My wife, three kids, and I spent a week exploring the country, with the majority of our time having been spent in the capital, Sofia. We also fit in some time to drive out and see other great Bulgarian cities like Plovdiv, Nessebar, and Sunny Beach. The country is just a scant two-hour flight from where I live in Israel, and I knew that many of my fellow poker-loving Israelis enjoy heading there to play poker, specifically in Burgas and Varna. But we weren’t planning to visit either of those places, and that’s not the kind of trip this was. However, I was quite genuinely surprised to discover upon our arrival that the hotel we stayed at in Sofia, the Grand Hotel Millennium, housed a poker room. The big sign pictured below greeted us as our taxi pulled up to the hotel. Why this was particularly surprising was that there was no mention of any poker room, much less a casino on the hotel’s website. Well, as longtime readers surely know, I couldn’t NOT pay a short visit.

A packed family vacation itinerary meant that my poker room visit would be taking place in the wee hours of the morning, after everyone went to sleep. So, at 1:30 am on Thursday, I took the elevator down to the casino, planning for a three-hour session.

As in all of the European casinos I’ve visited, I knew I’d need my passport to register for a player’s card. Moreover, again, as in most European casinos, the cashier window allowed for currency exchanges into the local currency (Bulgarian Leva) with the benefit of exchanging back into your original currency at the same rate (if you still have chips left at the end of your session). At the time of publication the rate was just slightly under 2 Bulgarian Leva per 1 euro or US dollar. The casino had plenty of slot machines, a few tables games, and a poker room, but I didn’t notice any bingo there, so it’s not a place that would appear in a Smart Bingo Guide. In any case, I was just curious to see the poker they had on offer. 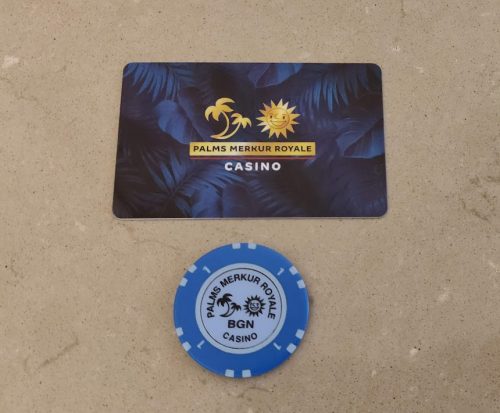 What I found was a beautifully appointed poker room, featuring about a dozen top-of-the-line poker tables each outfitted with automatic shufflers. The tables did not have built-in charging ports, but the chairs were exceptionally comfy and play at all tables was 8-handed, giving us all ample room. Bulgarian and English were spoken at the tables, and the dealers always made sure to announce the action in both languages.

Considering the late hour and that it was mid-week, I was pleasantly surprised to see five full tables running, with stakes of 1/2 and 2/5 (Bulgarian Leva) Hold’em as well as 5/5 PLO in action. The room offered a number of promotions, too, including a 550 Leva bonus for making a royal flush (using both hole cards) as well as a Bad Beat Jackpot of approximately 25,000 Leva for the Hold’em tables and about one-tenth of that for the Omaha tables. 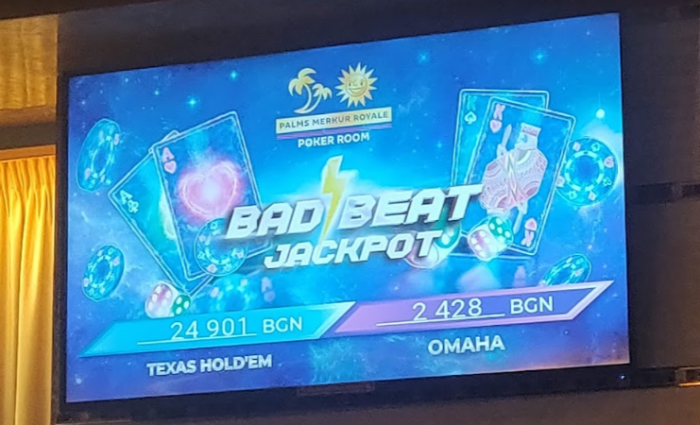 Free drinks were available (water, juice and soft drinks; I believe alcoholic beverages were for pay) and the room was amply staffed with enough waitresses to bring said drinks to the tables. While I didn’t ask, from my observation the rake seemed to be a very reasonable 5% up to 10 Leva.

The one negative I can’t help but point out is that unfortunately, as in many European poker rooms, the Palms Merkur Royale was not a smoke-free area. It’s obviously a cultural thing, and there isn’t much the occasional visiting outsider can do about it other than try to not let it affect your mood or poker play.

As for the poker play itself, with no offense intended to the other players, I can’t say I was too impressed with the skill level. Sure, we were playing at the equivalent of a $.50/$1 Hold’em table, so I didn’t exactly expect to be sitting with GTO wizards. Even so, it was immediately obvious to me that while they may have known how to play poker, no sharks were roaming these waters. In close to three hours of play, I can’t remember seeing a single 3-bet (except for the twice that I did so pre-flop, to which action folded back around for me to scoop those couple pots).

I would’ve broken even in my short session were it not for the one unique wrinkle of my venture into Sofia, Bulgaria’s poker waters: something called “choko-roko.” Once per orbit, a player can request to play the hand “choko-roko”, which has some similar characteristics to a bomb pot. All players ante a predetermined amount (usually between 5-10 Leva) pre-flop, and there’s no other pre-flop betting. Post flop, in sequence, each player decides if they wish to play or fold, with “play” meaning they match the pot (e.g., 5 Leva per player at an 8-handed table = a 40 Leva “match”). After the match betting, a turn and river are dealt with no further betting, and the best hand scoops.

Unfortunately, I didn’t manage to scoop a single “choko-roko” hand, but participating in them did cost me and I ended up recording a 100 Leva (50 Euro) loss on the session.

All in all, I enjoyed my short time in the Palms Merkur Royale poker room. While I could do without the smoke, it was a great poker room that I’d happily visit again someday.