Reflecting On My First Run It Up Reno Experience

At the recently-completed Run It Up Reno IX, I told Jason Somerville that I’ve never been more stoked to attend a poker festival. I met the Run It Up founder shortly before the cards hit the air on the first day of my assignment for PokerNews, where I got to cover the fan-friendly festival as a live reporter.

There was already a fun and festive feel inside the Peppermill Resort in Reno, Nevada, even before the action started. Over the course of 11 days, my colleague Brandon Temple and I were on the floor for all things RIU, and it definitely did not disappoint.

Here are some of the best things I saw at Run It Up Reno IX.

On Day 1b of the Mini Main, a man named John Gribben told my cohort Brandon that we were giving him “too much coverage”. Every time one of us would walk by, Gribben was seemingly involved in some kind of a big hand, or had added more chips to the stack.

Fast forward to Day 2, and our John Gribben coverage was still going strong, as the Olympia, Washington resident made a final table run. The tournament ended with Gribben hoisting the Mini Main Event trophy, and taking home the $30,000 for a career-best finish. 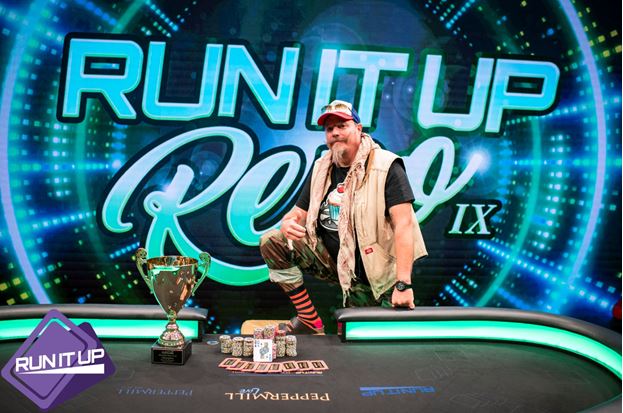 “Eighty-five into thirty-thousand!” exclaimed Gribben as he celebrated the win. As it turns out, Gribben had qualified for the Mini Main Event by way of an $85 satellite.

I interviewed Gribben after the win, and found out that earlier in the year he made the decision to start living in his van, traveling and playing poker full time.

Gribben was an ubiquitous presence throughout the festival, sweating the action in events he wasn’t playing, and also finishing up with a 32nd-place finish in the $600 Main Event, adding another $2,220 payday to his haul.

I can definitely say that hearing about the atmosphere of the Run It Up Reno festival instills a case of FOMO like perhaps nothing else short of the World Series of Poker.

Garland, Texas resident Doug Brown decided not to miss out this time. Inspired by his favorite poker podcasts, Brown decided to buy a plane ticket and travel, by himself, to Run It Up Reno IX to experience the event firsthand. 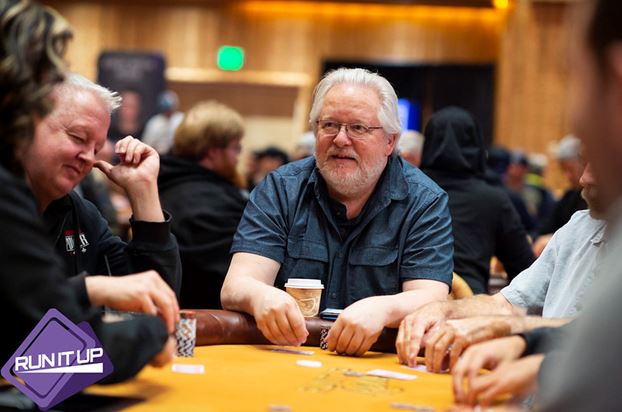 One of the biggest influences on Brown’s decision was Joey Ingram, who’s talked about the Run It Up Reno series on his Poker Life podcast and was scheduled to make an appearance at Run It Up Reno IX.

Ingram, as the poker community knows, has been busy doing some of the most important work of his career in recent weeks, dedicating his life to the investigation of a cheating scandal that’s become the biggest story of the year in poker.

Ingram got word about Brown’s trip to RIU, however, and took the time to send him a personalized video.

Brown left Run It Up Reno with not only that message from Ingram, but also a pair of cashes, including finishing in the money in the Main Event.

During certain events at RIU IX, Halloween candy would start appearing everywhere in the Capri Ballroom at the Peppermill, and the trail of mini Baby Ruth’s and Twix would always lead straight to whatever table Vanessa Kade was playing at the time.

Kade made a couple of deep runs at the festival, finishing 19th in the Mini Main Event for $1,625 and coming up just short of the final table with a 12th-place finish in the Main Event for $5,400.

At all times during RIU IX, Kade was accompanied by Celeste, a candy-filled unicorn that was perhaps the biggest celebrity in attendance by the end of the festival. 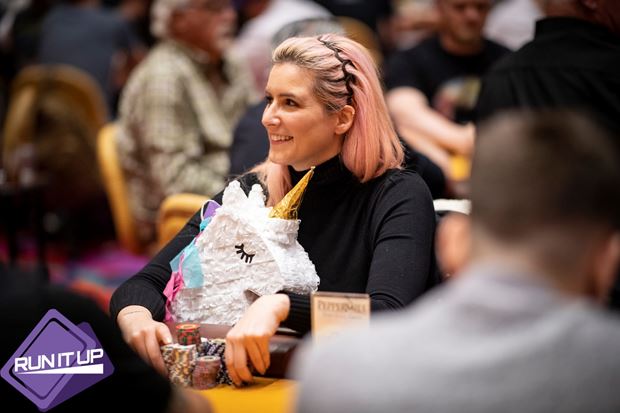 Vansessa Kade, with Celeste the unicorn

Kade’s tablemates, including the dealers, would always have candy in front of them whenever the Canadian poker streamer was around. One of the dealers showed me her stash on a break during Day 2 of the Main Event, unloading a purse stuffed full of bite-sized treats.

Despite Kade’s generosity, it wasn’t all fun and games.

CHOCOLATE THIEF ON THE LOOSE at @wsopc @harveystahoe: a player left a @KITKAT from Celeste 🦄 on the table during break, only to return to find it missing.

If you have more information regarding this heinous crime, please comment.

No word on whether this chocolate thief has been brought to justice, but let’s hope this doesn’t discourage Kade from bringing Celeste along at future RIU events.

Run it Up Reno IX brought together a cast of poker personalities that you just don’t usually see all in one place at the same time.

Survivor alums like Tyson Apostol and Shirin Oskooi were not only in attendance, but played in nearly every event. Both were very nice, approachable and entertaining, and Apostol has a “go big or go home” playing style that makes every trip to his table an adventure from a live reporting perspective.

Along with Somerville, Run It Up ambassadors Ricky “ratedGTO” Guan, Arlie Shaban, and Andrew Neeme also made the trip to the Peppermill. Poker vloggers Brad Owen and Jaman Burton were in attendance as well, and all of these guys were extremely affable.

As someone who spends quite a bit of time watching poker vlogs, I was definitely excited to see a few of my favorites at the festival, and had to get a photo with Burton before my time was up. 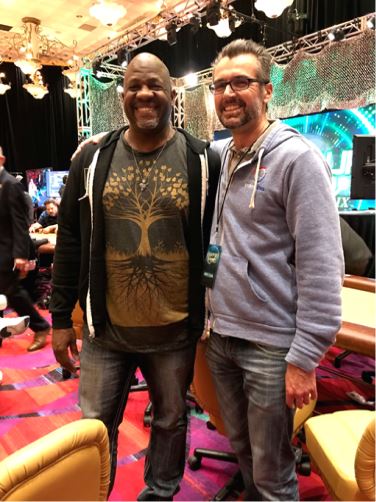 The Run It Up Reno fields were full of other great players as well, as I got to cover tournament crushers like Jesse Sylvia, Matt Stout, Max Young and Josh Prager over the course of the series. Chris Moneymaker came in for the Moneymaker Tour event, in which Thirst Lounge Streamer Drew Gonzalez booked the win and the Platinum Pass to the 2020 PokerStars Players Championship in Barcelona.

I got to meet Garry Gates, Joe Stapleton and numerous other fun-loving people who really made the experience unique, and one that I’ll always remember. If you’ve ever wanted to attend Run It Up Reno but haven’t yet had the chance, I can’t recommend it enough. I guarantee the experience will not disappoint!