Poker is the ultimate window into the personality and culture of a place. The game mirrors the struggle of life itself and has an appeal that crosses cultural boundaries, which is why I love to travel and play.

…I’m also a degenerate gambler (and poker blogger) who can’t stand more than a few days away from the tables, but, you know, all that cultural stuff is important too.

I recently took a trip to St. Julian’s, Malta to soak in the sunshine and local poker scene.

Jokes on you, poker gods. Your #badbeats can’t hurt me when I wake up to scenery like this. #EPTMalta #time2rungood pic.twitter.com/sTnAN5Ui2Y

It wasn’t a typical week in Malta, as the European Poker Tour was in town spreading huge tournament events at the Portomaso Casino.  I’ve always wanted to attend an EPT, and even though I’m a small stakes grinder who plays nothing higher than $33 tournaments online, I decided to attend this event and take a shot or two in the smaller buy-in games.

I manage to embarrass myself almost immediately by attempting to enter the driver’s seat of the airport taxi.  Did you know they drive on the left side in Malta?  Guess I should have Googled that.

The taxi ride confirms the only three things I did bother to learn about Malta before the trip: It’s beautiful, sunny and the people are very friendly.

Anyway, there’s no time for further sightseeing today.  I’m a nervous flyer so I always drink beer before a flight, regardless of the time.  Today I flew at 7 AM so naturally I’ll spend the rest of the day sleeping off my early morning beer buzz in preparation for tonight’s tournament.

Rested and ready to go I head to the casino in the late afternoon.  I’ve heard great things about EPT fields and the soft and juicy cash games that usually accompany an event like this. So I figure the conditions are ripe for a profitable exploration of the Maltese poker climate.  The plan is to stick to a poker budget of €800, with the centerpiece being a €220 buy-in MTT to kick things off on day 1.  A good run here and maybe I’ll be able to play in some of the larger EPT events.

The Cards Are In The Air

The first few hours of the tournament are a dream.  My table is too soft to be real and I constantly pick up pots uncontested.  The guy on my right opens hands like 65o under the gun for 7x the big blind and then bets bottom pair into 4 people.  The guy on my left doesn’t even know how to look at his hole cards without exposing them.  The rest of the table is full of weak players who don’t seem to be capable of anything too creative.  I’m having my way with the table and can’t help but start to dream about winning this thing, buying into the €5k Main Event and sitting here in a couple of days:

Where I plan to be sitting in a couple days #EPTMalta #onetime pic.twitter.com/C8ZEg0xnj1

The Dream Becomes a Nightmare

As the saying goes, ‘If you want to make the poker gods laugh, tell them your final table plans’.

About 5 hours into the tournament and 30 spots away from the money, I’m sitting at around 30 big blinds.  There’s a raise from early position and two calls behind.  I peel my cards slowly and look down at glory: AA.  The dream spot come to life.  I give it a few seconds of ‘Hollywood’ and then ship my stack into the middle.  The opening raiser quickly calls and the other two players fold.  He tables TT and all I can think about is how dominant I’ll be in this weak-field shallow stacked tournament with 64 big blinds on the bubble.

Of course, you’ve all played poker before so you know how this ends.  Ten on the flop like magic and no turn or river ace to save me.  Busted, no cash.

I wake up on day 2 with an odd sense of optimism after such a terrible start to my poker trip.  I suppose with scenery like this, it’d be hard to stay grumpy for too long: 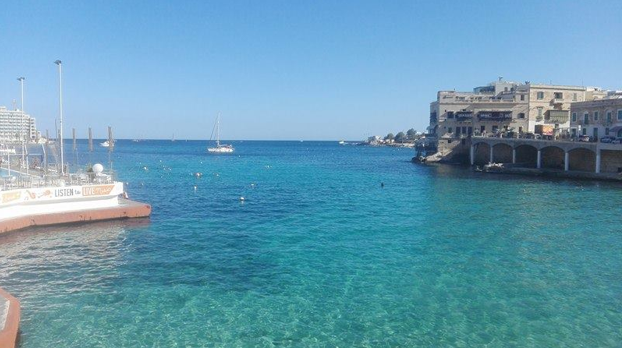 I head down to a seaside café and enjoy a delicious cappuccino for €1.50.  Combine that with this €1 breakfast and that €220 tournament I just busted is starting to pay for itself.

On my walk to the casino I stop to buy a bottle of water.  The price is €1 and all I have is a €50.  I sheepishly hand the bill over and ask the cashier if it’s okay and he responds, ‘don’t worry, be happy’.  I live in Poland where asking a cashier to break a large bill on such a small purchase can get you killed, so obviously I’m pretty happy with Malta so far.

No poker for me on day 2.  Despite the positive vibes I make the executive decision to take a full day away from the tables.  That bad beat in the tournament was just too brutal.  I think I’ve recovered, but it’s better to take the full day just to be sure.

Instead I spend my time mingling with the EPT crowd and watching some of the high stakes action.  Everywhere I look I see famous poker players.  On my way to sweating a high roller final table featuring Scott Seiver and Charlie Carrel I run into Team PokerStars pro Jaime Staples and lend him a friendly ear for his Main Event exit story (he busted after just 4 hands!)

The wait is over, I’m ready to make my return to the tables.  This time I’ll be checking out the cash games.  Events like the EPT and WSOP are famous for the extremely soft cash games that usually accompany them, so I’m eager to get into action.

True to legend, my table is soft as butter.  I arrive around 5 PM and the whole table is drunk.  They force me to take a tequila shot with them shortly after I sit down and I find out that two of them have just busted the Main Event.  They’re happily tilted and more than willing to spew off a few buy-ins in this 1-2 game.  I’m happy to oblige them of course.

In addition to the drunks there’s a rich looking lady who keeps trying to bluff me.  I guess I look money-scared or something because she plays every pot against me, donk-betting into me after I show aggression.  I call her down every time and she never once has it.

Luckily, Maltese cuisine is heavily influenced by neighboring Italy.  There’s also British influence, as Malta was a British colony, so fish and chips and the classic English breakfast are pretty easy to find here too.

I stayed mostly on the Italian side of things during my week in Malta:

I approach the cash game tables with a fat wallet and yesterday’s momentum, buy in for the full €500 and get to work.

My stack dwindles a bit but I manage to slowly work back to even.  It’s a bit earlier in the day, so the table is still sober, but not too tough.  The gentleman two seats to my left can’t seem to fold anything.  He’s in every pot, usually as the aggressor. He’s picked up a few hands, so he’s gotten away with it so far.  I wait patiently, scooping small pots against some of the tighter players and biding my time until I can stack this guy.

There’s No Justice In Poker

My time comes a few hours in as I pick up 77 on the button.  It’s folded to me and I open for 5x.  The gentleman who doesn’t like to fold, re-raises me.  I call and see a flop straight from the heavens: Q72

The gentleman bets ¾ pot and I min-raise.  He jams instantly and I obviously call.  Turn 8, river Q.  His fingers shake as he flips over his Q8 for the runner-runner full house.

I show the table my weaker boat in disbelief.

He stacks the €1200 pot that should have been mine as I walk away muttering profanities to myself.

Back to the cash pit for more punishment, I once again buy in for the full €500.  I’m going home tomorrow, so this is my last chance to turn things around.

I see a lot of familiar faces from the first two days at the cash tables.  Mostly Italians, local Maltese and Israelis.  The fields seem generally competent, but beatable.  Aside from a few notable exceptions, players here play tight and don’t make huge mistakes.  It’s more of a ‘lose my money slowly’ crowd than an outright ‘spew-fest’.  But like I said, there are a few exceptions like my friend with the Q8 from yesterday and the friendly Israeli guy on my right today.

A few hours into the session, hovering just above my starting buy-in, I pick up KK and flop top set against my new friend.  He check-raises me all-in and I obviously call.

After he tables his flush draw he asks if I want to run it twice.  I’m happy to do so since I’m a favorite to win both run-outs and this way I have insurance against a bad beat.

Miraculously, he wins both times and scoops the whole pot.

Another €1k+ pot with my name all over it, heading somewhere else.  At least he was nice enough to take a selfie with me: 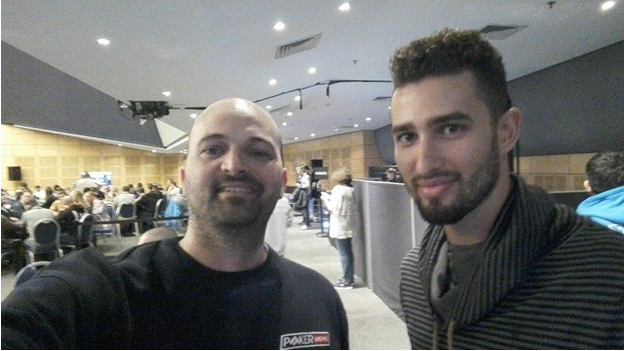 When It Rains, It Pours

Despite my misfortunes at the tables, there’s still plenty to do here. I head down to the main tournament room to sweat some of the action and write an article for my blog.  Unfortunately, there are technical difficulties and I can’t post any articles.

I can’t seem to catch a break at the tables, I can’t do my job, I’ll just go to the beach and enjoy the rest of my day.

So I get to the beach, remove my shirt and dive into the warm Mediterranean water.  For about 30 seconds, my bad luck seems like a lifetime ago. I laugh to myself, looking back at my silly frustration.  Life is good, it’s just money and at least I didn’t go over budget.  I should be grateful that I get to enjoy this beautiful place.

Then it starts to rain.  Like, monsoon rain.  After 5 days of absolutely perfect sunny weather I get hit with a tropical storm not 1 minute after entering the water.  I swear it was sunny and clear-skied when I got here.

Chris Ward is a low-stakes online poker pro, blogger and avid world traveler. Originally from California, he moved to Central Europe after 'Black Friday' and now writes a daily poker blog at blog.pokerlivepro.com.