Home POKER NEWS Pokertube.com is All Grown Up Now and Definitely Worth a Visit
POKER NEWS

Pokertube.com is All Grown Up Now and Definitely Worth a Visit

About 6 years ago I distinctly remember Maurice, from my home game, tell our group while we were playing that we HAVE to check out “this new site, Pokertube – it’s freaking amazing and it’s got like EVERY poker video you can imagine”. This was 2008, still in the wake of the poker boom when the game was at its peak popularity. Naturally, when the game ended in the wee hours of the morning, the first thing I did when I got home was fire up the Pokertube.com website to see what it was all about – I was instantly hooked. Not only did they have every episode of the WSOP broadcasts ready to stream online as well as popular poker shows like High Stakes Poker, but they also had a whole bunch of other niche poker lifestyle video content like Ace in the House (Ed. note: remember that show? I actually thought the idea of a poker pro like Mike Matusow coming to play in my home game was pretty cool, oh well…) and High Stakes Golf, which featured big-betting poker players. 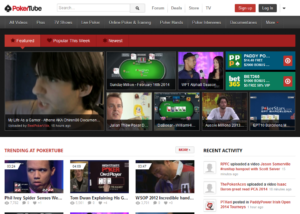 With the passage of time, however, my life got busier and I had less time to watch poker online (been busy doing a lot of poker writing, you know? ;-)). That said, over the last couple days I’ve seen via some other poker news sites that Pokertube has been making some noise again, having totally revamped their site, etc. I got nostalgic so I decided to pay them a visit again today for the first time in a while. Boy am I impressed with their site’s evolution!

A Look at the “New” Pokertube

For starters, Pokertube stayed true to their video origins and now have over 15,000 videos in their poker media library. Aside from old broadcasts of every major live poker tournament event series, they’ve also still got plenty niche programming on there, with videos of ANYTHING related to poker, like Daniel Negreanu‘s appearance on Millionaire Matchmaker and even The Simpsons episode about online poker.

Deeper than the increased video quantity, what impresses me even more about “the new” Pokertube, is that they’ve also expanded to include a number of other different poker “assets”. Now they’ve got a poker news section, an online store where they offer poker coaching packages, poker books, poker apparel and other resources. There’s also a forum that has got thousands of threads and posts about anything and everything poker-related.

Perhaps best of all their new offerings, however, is that they’ve now got live streaming of poker tournaments around the world, which is something that hard core poker fans really love, as KevMath could certainly attest to.

While I don’t necessarily think I’ll be doing binge-watching of poker videos anymore, as I’m still generally pressed for time these days (see: Why I don’t blog about poker more often), Pokertube.com has gotten a bookmark and I’ll definitely be visiting the site more often once again… and telling Maurice that he should too next time we play in the home game!