Tennis superstar Rafael Nadal has inked a sponsorship deal with PokerStars, the world’s largest online poker site. The endorsement deal is unquestionably the highest-profile sponsorship in poker history, with the 26-year-old Nadal in the prime of his tennis career. 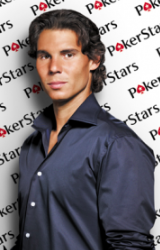 Though a few select celebrities and sports personalities, such as former Seinfeld star Jason Alexander, former Major League Baseball star Orel Hershiser, and retired tennis pro Boris Becker, have agreed to endorse online poker rooms in the past, online poker sponsorship deals had traditionally only been struck with pro poker players like Daniel Negreanu, Phil Hellmuth, Jason Mercier, and others.

Nadal, winner of 11 tennis Grand Slams including the just completed French Open, is known just as well in the sporting world for his fiery competitiveness as for his on-court successes. This particular character trait makes him well-suited to endorse a game in which all players strive so hard to win. Clearly, PokerStars is banking that Nadal will have crossover appeal to sports fans, especially in his native Spain, who haven’t yet tried playing poker online; a pretty good bet in our opinion.

The two-year deal with PokerStars is reportedly going to add €12 million to Nadal’s earnings off-court, where he already has lucrative deals with Nike and Kia Motors.

Nadal is admittedly a beginner when it comes to poker, but is looking forward to becoming a winner, as you can see in this promotional video:

As popular as poker is, the game has always been relegated to the relative fringes of the sporting world, traditionally grabbing headlines only on rare occasions such as upon the announcement of each year’s World Series of Poker Main Event winner. The Nadal–PokerStars sponsorship deal, however, is a game changer in every sense of the expression. It brings poker and online poker that much closer to the mainstream. It matches a successful face, recognized the world over, to a game with millions of followers and players but still nowhere near its full potential audience.

Athletes and celebrities regularly appear in commercials and other media advertisements to help sell breakfast cereals, automobiles, and all manner of consumer goods. Now, for the first time, a bona fide sports superstar has agreed to use his stellar image to promote the game of poker. The terms of the deal have Nadal representing the PokerStars brand in advertisements, charity events, and of course in online poker tournaments. In all likelihood, Nadal will make his official debut as a PokerStars spokesman during the upcoming World Series of Poker Main Event. He will also be carrying the Spanish flag at the Opening Ceremony of the upcoming Summer Olympics in London, so it would be a true coup if he were to be sporting a PokerStars patch in front of the event’s billions of viewers worldwide (I’m taking full credit for that idea if PokerStars top dog Mark Scheinberg hasn’t yet thought of it :-)).

We salute PokerStars for finally breaking the glass ceiling with their latest signing and hope that Rafael Nadal is the first in a long line of top names to be associated with the game of poker.