PokerStars and partypoker ending off 2018 with lucrative online event series

While many live tournament series are beginning to wind down for the year, online poker rooms are upping the ante with lucrative tournament events as PokerStars and partypoker are kicking off online series with millions in guaranteed prizes. While you could spend the next few months grinding away at cash games or just plain getting your gamble on at sites such as allvideoslots.com, two of the biggest poker sites are giving you the perfect opportunity to give your bankroll one last boost before the beginning of the 2019 poker year.

If you’re located in France, Spain, or Portugal, PokerStars has introduced a brand new series especially for you. The first ever Southern Europe Championship of Online Poker (SECOOP) will run from October 28 through November 12 and features over €10 million in guarantees.

The series features 149 events with buy-ins ranging from €5 to €250. Between ten and twelve events will run daily, with the majority of events featuring a buy-in under €100. Event guarantees for the series range from €15,000 all the way to the €1 million guaranteed Main Event on November 11.

Also, players can compete for one of three $30,000 Platinum Passes during the series, as Daily Leader Board winners and those who complete the SECOOP Challenge can earn their way into a freeroll to play for a Platinum Pass that includes an entry into the PokerStars Players NL Hold’em Championship in January.

For those looking to stretch their SECOOP bankroll a bit further, PokerStars is offering multiple ways to win your way into events. By depositing €50 or more using the code SECOOP, you’ll be eligible to play in a freeroll awarding 200 entries into the Main Event. Special Spin & Go events will also run during the series that will award tickets worth up to €250.

Another series kicking off on exactly the same date, October 28, is the partypoker Monster Series. This year’s event runs through November 4 and features guarantees of $3.4 million. A total of 144 tournaments are on the schedule with both Low and High buy-in events ranging from $2.20 to $33.

Two of the larger events of the series are a pair of $33 8-Max PKO events running on October 28 and November 4. Both feature a $200K guarantee. Other events in the series featuring guarantees ranging from $2,000 to $100,000, with the November 4 event featuring $9K in added prizes. Make the final table and earn a MILLIONS Online satellite ticket worth $530. Win the event outright and you’ll get a $5,300 MILLION Online seat. 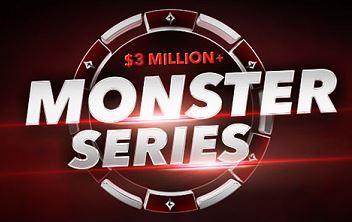 Also, you can earn prizes just by playing in Monster Series events. Play in 10 events or more and you’ll earn a spin on the Monster Wheel that can earn you cash prizes or entries into Millions Online events. Tournament tickets range from $2.20 all the way to a $5,300 MILLIONS Online seat.

If you’re not into tournaments, there’s also extra value to be had by playing in their cash games during Monster Hour, which occurs Monday through Saturday from 17:00 to 18:00 CET, or on Sunday from 15:00 to 16:00 CET. If you do, you’ll earn double cashback points.