Poker Tips by George: Luck is Always There

No matter how skilled you are, luck is always there, ready to strike. Whether it’s good luck or bad luck, you have no control. Luck is another way of saying “chance” – the possibility that something will happen. That’s the kind of thing you can read more about on the Mystino Blog. Play poker and, rest assured, luck will come your way. Bad beats are a good example of bad luck for you – but good luck for the opponent who beat you.

The Sunday, November 28, 2021, issue of the Los Angeles Times’ weekly poker column describes a big hand in which luck played a dominant role. As described by poker media veteran Chad Holloway, while he was playing in a $1,000 no-limit hold’em tournament in Las Vegas, he was dealt 6c-6d in the under-the-gun (UTG) position – first to declare pre-flop. He reasoned that “the hand was too strong to fold, and limping would be too weak.” With all his opponents still to act behind him, he cautiously raised just a little above the minimum. The player in the hijack (the “villain”) was the only one to call. They went to the flop heads-up. 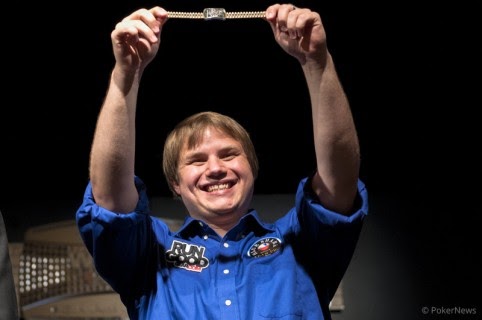 Chad Holloway, hoisting his Casino Employees WSOP bracelet back in 2013

The flop was Jh-Js-6s. He had connected with a small full-house, 6’s full of jacks. WOW!

Chad realized that betting too high would likely scare off his only opponent. Of course, he wanted action to optimize the pot size. So, instead of open betting, he slow-played by checking his hand, and was thrilled to see his opponent make a good-sized bet.

Well, villain didn’t reraise, but Chad did get the next best thing when villain called to see the turn. The 5s fell on the turn, putting a third spade on the board for a possible spade flush. Chad went all-in, hoping his opponent would call his bet – and he did. The river was a blank. Showdown: Villain held As-8s (which happens to be one of my favorite starting hands) for the nut flush – but second to Chad’s full-house. That hand allowed Chad to double-up his chips, and he subsequently cashed the tournament.

No question, Chad was incredibly lucky to flop a full house. The chance (probability) of a flopped full house is extremely low (but it did happen). And the poor villain had the worst luck by making a big hand – but not big enough, costing him most of his stack and soon forcing him out of the tournament.

No, this hand wasn’t a bad beat, but it sure was a good example of how luck can affect the results of a poker game – and, in this case, the tournament.