Poker Gets Prime Attention in “On the Origins of Sports”

One of the key things about any sporting pastime is that it has rules. Rules for those events, however, haven’t always been the same as they are now. Take poker, for example. Did you know that originally there were only four players to the game? Now did you know that, technically, this is incorrect? This little idiosyncrasy and other tidbits of information are unveiled as poker gets prime attention in a new book that focuses on the sports world. 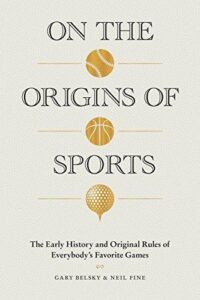 Authored by Gary Belsky and Neil Fine, On the Origins of Sports (the title of the book is a tongue firmly planted in cheek play on evolutionary scientist Charles Darwin’s seminal work on the subject, On the Origins of Species) examines 21 different sports or activities – because there is some debate as to their true “sports” qualifications – and tries to find the first codification of their rules. The book recognizes some of the usual suspects – football, basketball, baseball, etc. – but also delves into sports (and here’s where the “activities” term might come into play) such as kickball, whiffle ball, fantasy football and Rochambeau (otherwise known as “Rock-Paper-Scissors” …by the way, thanks for the rules on “Rock-Paper-Scissors-Spock-Lizard,” guys!). Needless to say, you can see that there is some seriousness to Belsky and Fine’s research, but they did have a bit of fun along the way.

What’s the Poker Part of the Book About?

Poker is one of the 21 sports that gets a great deal of attention from Belsky and Fine and they do find some intriguing information. While accepting the generally believed rule that some form of poker goes as far back as the Chinese in the 10th century, Belsky and Fine believe that the modern game is more closely related to the 17th century French game poque, which they state was in itself a derivative of earlier Spanish and Germanic card games (primero and Poch, report Belsky and Fine). Each game had the same basic set rules as to the hierarchy of hands, but what set them apart – according to Belsky and Fine – was that the best hand didn’t necessarily always win. 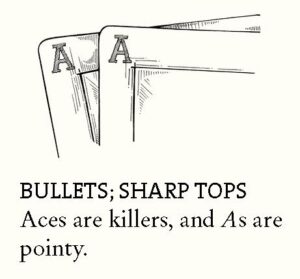 Excerpted from On the Origins of Sports by Gary Belsky and Neil Fine (Artisan Books). Copyright © 2016. Illustrations by Sarah Rutherford.

The element of “bluff” is what brought Belsky and Fine to the first recorded rules for “poker.” (Yes, the game had been played on the riverboats of the Mississippi River in the early 1800s with four players and 20 cards, but no codified rules existed.) According to their research, Belsky and Fine found Bohn’s First Hand-Book of Games, which introduced the rules of poker as we might be able to recognize it today. First published in 1850, On the Origins of Sports goes to the 1856 version of Bohn’s First Hand-Book of Games to replicate the rules of poker.

There are some similarities, such as a “full table” being 10 players (with the 52-card deck, that was all that could play what was at that time called “draw” poker) and each player would “deposit an equal stake in the pond,” or ante in to play the hand. After the cards were dealt, there was another round of betting in which either a player could win by showing down the best hand or betting out their opponents. Surprisingly, even at this early date there was discussion of “counters” or “chips” being in usage rather than actual money.

There were some differences in the Bohn’s rules, however. Under those 1856 rules, there was no such thing as a straight, a straight flush, or a royal flush. The hand rankings were quite simple, consisting of one pair, two pair, “three of equal value” (now, of course, three-of-a-kind), a flush, a “full hand” (full house), and “four of equal value” (four-of-a-kind). If no one decided to play after anteing up, then the chips stayed in the center and were played under a “Double Head” pot (and even a “Treble Head” if it went another round with no action post-deal). Finally, there are those who like to think that they invented the “straddle” bet… nope, it is detailed in Bohn’s rules, called a “Blind” bet because the player left of the dealer puts in the extra chips over the ante (the rules also state that a player left of that player can additionally “blind” bet, if it is double the original bet).

My Impressions as a Longtime Writer Steeped in Poker

The chapter on poker in Belsky and Fine’s book isn’t Earth-shattering information that will revolutionize what we know about poker. It is outstanding, however, that poker gets its due alongside those more “traditional” sporting endeavors that people originally think of in this manner. For Belsky and Fine to put the effort into researching poker’s colorful history – and to find its first codified rules – is something that is truly special. 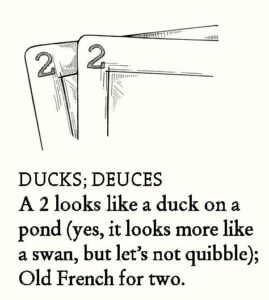 Excerpted from On the Origins of Sports by Gary Belsky and Neil Fine (Artisan Books). Copyright © 2016. Illustrations by Sarah Rutherford.

On the Origins of Sports is also a truly unique book. While it is a tremendously researched tome, it is also a great deal of fun, especially where the authors point out the changes in the rules to today’s version of the sport. It is quite interesting to see how some sports evolved from their early days when their rules reflected different times and different purposes for their creation. For example, basketball didn’t originally have a cap on the number of players on the floor, so more people could play and get their exercise at the YMCA in Springfield, MA, where Dr. James Naismith created the game. It may also surprise you as to where certain sports also got their starts; from this book you’ll learn that Abner Doubleday didn’t invent baseball, that fantasy football has been around for decades longer than you really know, and that UFC fights, when they first started in 1993, could have gone on all night (and only had nine rules!).

If you consider yourself a historian of sports – or would just like to read a book that has a fun time with the history of the games we play and watch – On the Origin of Sports would be up your alley. The chapter on poker is simply icing on the cake. Get the book here!