In November 2013, Carl Dunn hiked to the top of Camelback Peak, a prominent landmark outside Phoenix, Arizona, and did some thinking. Life had been rough lately. Only a few years earlier, as a teenager growing up in the Bay Area, he had struggled with depression, anxiety, and alcoholism. He’d been to jail for selling weed. And his most recent goal, to play poker professionally in Las Vegas, had failed. On the mountain that day, peering down at the city, Carl rededicated himself to a mindset of positivity, goal-setting, and hard work. He had $20 to his name. 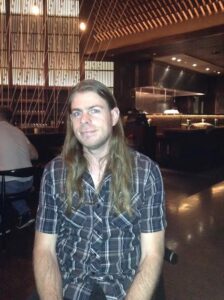 When we met last November at Lemongrass, a Thai restaurant in the Aria Casino, Carl was wrapping up a successful 2014. He had earned $24 an hour over 1,593 hours at the poker tables; just under $40,000 for the year. More importantly, Carl felt that he had found direction in life as an artist, musician, and poker player. He had committed to new challenges: Run a marathon. Start a band. Make art. Travel to Europe. Go on more dates. Help the homeless. “I am not perfect by any means,” Carl said, “but I feel good if I make a little progress every day towards becoming a better person.”

How did you get into poker?

I found poker in 2008, after I got kicked out of the Army for a DUI. I drove cross-country from Fort Bragg, North Carolina, back to the Bay Area. A few of my friends invited me to their home game, which was just a bunch of drug dealers hanging out. I was a pot dealer for about ten months. I tried getting a real job, but it’s kind of hard when you’ve been kicked out of the army. All of my friends were potheads, so I was basically a mailman. One day I got pulled over, the police searched my car, I had baggies and maybe an ounce of weed and a pair of brass knuckles I’d won playing poker. So they busted me and I took a plea deal of four months in county jail.

How was that experience?

Jail sucks. It’s a lot like the Army except that you don’t have to do anything. You’re sitting in a barracks with 50 dudes all day. We played a lot of cards. When I was in jail I was thinking about poker a lot, I was reading a lot of books, and I started to get better.

When you got out, you wrote, ‘I spent 2010 living virtually busto. I filled out 400 job apps but only got five interviews, which led to nothing.’ Was the big hurdle the felony on your record?

I guess. Maybe a lack of job experience or the bad economy. I’m just glad that I found poker. I deposited $50 on Full Tilt, started with one-cent/two-cent, and got to about ten-cent/twenty-five cent. And so when Black Friday hit in 2011 I was like, Damn.

Was it hard for you to transition from online to live poker?

It wasn’t really hard at all. I felt like what I learned online gave me a big step ahead when I played live. I had played hundreds of thousands of hands, so I had experience in five months what most people don’t play in a lifetime, so I felt that gave me a big edge.

You had the option to stay in the Bay Area. You could’ve gone anywhere, if you were feeling adventurous. Why Vegas?

Games 24/7. There’s like 50 poker rooms in Vegas. I like the hot climate and wanted to get out of the Bay Area for a while.

I played my guitar on the pedestrian bridges for tips for six hours a day and took $100 shots at $1/2 whenever I had money to spare after rent and food. 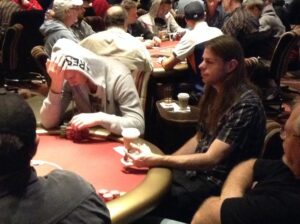 So many people have preconceptions of poker in Vegas. Now that you’ve been grinding the low-stakes games here for almost three years, what’s your impression of the poker scene?

People get wrapped up in debating the location of the best games, but I really think it’s more about table selection than about being in a certain city. Vegas affords the ability, if you’re at a bad table, to choose from 10 others. If you can’t find weak players, you move on.

What are you looking for when you table select?

Mostly, watch a few hands. Sometimes it only takes one hand to see who’s most likely going to go broke. If the blinds are getting chopped, it’s not a good table.

I usually say a musician or an artist. Some people know I’m a grinder, but there’s no reason to advertise it. Plus, I don’t really feel that it’s my identity. I just happen to play poker. And it’s probably bad for business if I say, ‘I’m trying to get every last one of your chips!

Here in the Aria, how many locals do you recognize?

About 20-30%. There’s a lot of grinders and a lot of tourists. And ‘tourist’ isn’t synonymous with a bad player. A lot of tourists are solid players and there are lots of locals who are terrible. So the challenge is figuring out each individual’s story.

I’m comfortable playing $2/5, occasionally $5/10. I don’t see myself playing higher than that because I don’t need much money.

So you don’t play poker for the money? Is the money the means to an end?

I just view it like a job. But I also sell my paintings, I play my guitar on the Strip. I have something to fall back on now, so I’m not too worried if I go broke. I was broke a year ago and I figured it out on my own. 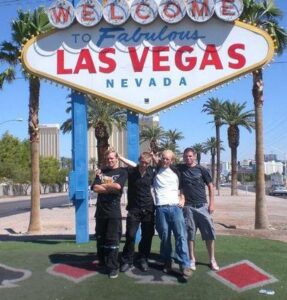 That can be one good thing about going busto, or being in a downswing, is that you’ll have experienced it and will be stronger in the future.

Yeah. You should expect it. Even before you jump in, you should know that you’re not always going to win.

Why do you think your first shot in Vegas didn’t work out?

I just wasn’t prepared. I went on a $5K downswing and I didn’t have enough money to keep going. And I had some leaks in my game that I needed to work on.

When you were busto, how did you grind once you got back in Vegas? Were you staked?

I had less than $20 cash and a $500 credit line with my bank already tapped out. This time I really wanted to be self-sufficient and grind back up without being staked like earlier in the year. So I played my guitar on the pedestrian bridges for tips for six hours a day and took $100 shots at $1/2 whenever I had money to spare after rent and food. Poker didn’t really start working out again until mid-December, but after that things have been alright.

What impacted your success this second time around?

You’ve got to put in the hours. It can be kind of hard being your own boss because no one really cares if you succeed or not. I also set goals. I don’t live up to them as much as I’d like to, but it’s good to push yourself to put in hours, play well, receive feedback on hand histories, and help others out.

Your poker goals thread used to be pretty results-oriented. Recently, though, you decided not to include winrate stats because, in your words, ‘it’s not something that I really care about. I play poker for the freedom; any money I make I’m happy with. I’m just going to focus on the quality and quantity of volume.’ Has this shift in emphasis helped you?

Definitely. I’ve never had a lot of money, and I don’t know what I’d do with it if I did. But the freedom—that’s more important than the money. I used to post how much I won every session. Now I ask, ‘what am I trying to accomplish through poker?’ I’d like to get into coaching. I was thinking about putting together some lessons on the fundamentals of poker. I have four years experience, so I feel like I have something that I can offer other people.

What else are you trying to accomplish through poker?

Since I’ve moved to Vegas I’ve been playing guitar on the Strip, which is nice, but one of my goals is to start a band. My last band was hardcore punk — like three-chord progressions, really fast — but I want to be in something a bit more technical, like metal. 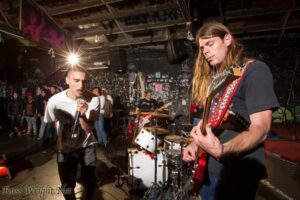 You seem proficient as a lead guitarist.

Yeah, I play rhythm but I can rip out and improvise pretty well.

You also started a charity group for poker players, with an emphasis on helping the homeless.

Yeah, I’ve talked to some players in Las Vegas to see if anyone wants to roll with me down the Strip and hand out sandwiches.  I don’t really believe in monetary contribution because they’d buy drugs or alcohol, which perpetuates the situation, but I was thinking about offering some life advice, like inspirational quotes, to help people get back on their feet. Because a lot of people, once you get down that low, you’re kind of stuck in a lower consciousness.

How has your painting been going? Have you always been painting?

I don’t really have any formal art training besides a handful of classes in high school. Lately I’ve been experimenting with the interplay of colors and motifs. I’ve done a few landscapes too. I really enjoy abstract painting because it comes from an inner imaginary and sometimes subconscious world of the mind and each piece is different and conveys a distinct message. I know I have plenty of room to improve and grow as an artist. 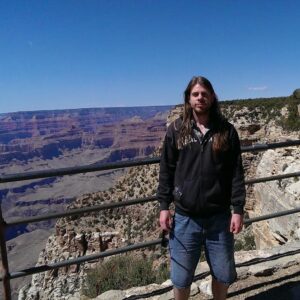 It sounds like this has been a good year.

I’m content in life at the moment. Everything is going pretty smoothly and I’m making gradual progress on all my goals. I’m stoked to continue my journey wherever it may take me. I feel I still have a lot of untapped potential.

This is really a very good article. thanks for sharing.Play card games with ‘FUN CASH’ and ‘REAL CASH’!!!! at Pokabugna