A few months back, I wrote an article about how there are similarities between baseball and poker. There was one similarity between the two games that I completely missed out on though. In fact, I’m almost ashamed of myself for missing this one because it’s quite possibly the most obvious connection between my two favorite games. 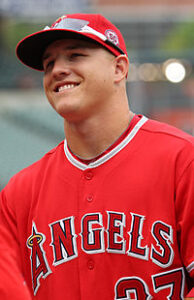 Mike Trout, the 2012 American League Rookie of the Year and a 3-time MLB All Star, is one of the premier players in baseball today. Trout, a 23-year old outfielder for the Los Angeles Angels of Anaheim, hits for a high batting average, gets on base at a high rate, and cranks 30+ homers a season. Want to know what else he does often? He strikes out. He struck out to the tune of 184 times this season, good for most in all of baseball.

While I’m sure the Angels would love to see Trout decrease his strikeouts, I’m fairly certain they wouldn’t trade him for anyone. Why? Because, well, he’s a once-in-a-lifetime talent. The Angels had the best record in baseball this year thanks in large part to Trout’s MVP-type season. His failures – or strikeouts – are actually a sign that he isn’t afraid to swing for the fences. After all, you can’t hit a home run if you don’t try to hit a home run. But, like many home run hitters, power swings often lead to a swing and miss.

I was looking for some way to compare myself to a superstar baseball player. I’ve got to be perfectly honest here – and I know this will come as a huge surprise – I don’t exactly have Mike Trout’s baseball talent. And, unfortunately, I’m not a world class poker player, although I’d like to think I’m pretty good. So I had to dig deep into thought to find a not-so silly comparison. 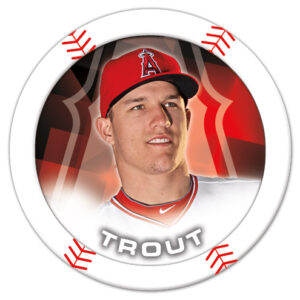 My tournament poker strategy is similar to Trout’s style of play on the diamond. Trout takes risks. He swings and misses often because he takes risks. Sometimes he misplays a ball in the outfield because he isn’t afraid to dive for it from time to time. I use the same philosophy when playing daily poker tournaments in Las Vegas.

I’m not afraid to bubble. Don’t get me wrong, I hate it when I don’t cash. It seems like such a waste of time when I don’t finish in the money, but I always play to win. I don’t care about finishing in third or fourth or first out right after the bubble busts. Like Ricky Bobby said in Talladega Nights, “you’re either first or you’re last”. Who knew a fictional character in a stupid comedy could give such meaningful advice?

Poker tournaments are high variance events. If you are aggressive and take risks, you’re likely to bust out early in many tournaments or finish around the bubble. So what? The big wins will offset the frequent “swing and misses”. That’s why the Angels will never tell Mike Trout to stop swinging for the fences. The home runs, doubles, and triples he hits easily offset the strikeouts.

Don’t fear the bubble. I love taking advantage of poker players who are clearly just sitting around waiting to get into the money. This is where I’m extremely aggressive. I don’t care if I walk into Aces. The way I see it is if the tight, money-chaser to my left happens to wake up with Aces, so be it. More often than not, they don’t, and I steal the blinds. Well-timed aggression wins at the poker table, just like it does on the baseball field.

So, next time you pay your buy-in, try taking the Mike Trout approach to tournament poker.

I hope you have the opportunity to play some tournament poker this month as well as to watch Mike Trout’s Angels compete against my beloved Kansas City Royals. Good luck at the poker tables and good luck to your baseball teams (but only if you’re a Royals fan :-))!