By Jake and Jeff Gould

The year 2020 has been a proverbial rollercoaster filled with ups and downs at every turn. Well… mostly downs. For months, the only place I felt safe was in the middle of my living room, lounged out on the couch in front of my TV. But soon, even my safe place proved to be vulnerable to the malignity of 2020 when on November 8th, we lost one of TV’s all-time greats.

Alex Trebek was hosting Jeopardy! before I was even born, and if you grew up like me, you idolized winners like Ken Jennings and Phil Ivey (I probably wasn’t your average kid). But when I got news of Trebek’s passing, I chalked it up to Murphy’s Law, which has seemed to be the running theme of the year.

For a refresher, Murphy’s Law claims that “whatever can go wrong, will go wrong,” and if there’s one place I’m familiar with Murphy’s Law, it’s at the poker table. So in honor of the late, great Alex Trebek, I present to you Jeopardy!, hummed to the tune of a struggling poker player. 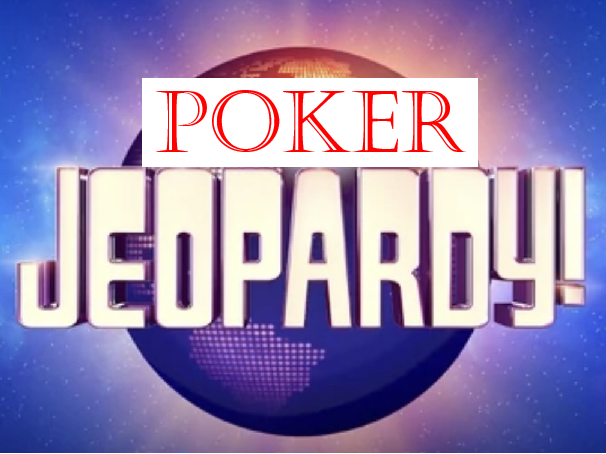 Remember how Jeopardy! works – we supply the answer, you supply the question.

Answer: They flop an ace, and there’s a bet and a raise before it gets to you.

The Question: What usually happens when you have pocket kings?

That was probably an easy one for most of you hold’em players out there, especially if you are a believer in Murphy’s Law. Unfortunately, it has been my observation that an unusually high percentage of players are ‘Murphys’ – even myself on occasion, as much as I hate to admit it. We try to be positive. We’d like to believe that if we play at legal Canadian online casinos like those on TheCasinoHeat.ca we’ll end up winners. All too often, however, that bubble bursts quickly. We want to expect the best, but sometimes being optimistic just seems like an impossible task, especially when we’re running bad. So I say, what the heck; if we’re going to be negative, let’s go all the way. Let’s test the limits of our negativity.

Get ready out there. Buzz in as soon as you think you know the correct response. Remember to phrase it in the form of a question.

This is Poker Jeopardy!

Answer: Your opponent makes threes and deuces on the last card.

The Question: What happens when you start with Aces – and you finish with Aces?

The Question: What always happens when you have a pat 8-5?

Answer: You make the stone-cold nuts on the river.

The Question: What happens when the dealer burns and turns before the action is complete?

How are you doing? Building up a nice little bankroll? Do you have that special pessimistic outlook – the one that can only come from years of bad beats? Because if you do, we’re just warming up! Now it’s time to move on to Double Jeopardy, where the values are doubled and the questions get tougher. Ready?

Answer: You make a royal flush in five, against two full houses and a four of a kind.

The Question: What happens when you’re all in on third street?

Answer: You have a pat 9 against a two-card draw and a one card draw, both in front of you.

The Question: When does the dealer forget which game he’s dealing and flop three face cards?

Answer: It’s seven-way action, every round is capped, and you win the pot.

The Question: What happens right before they discover that the deck has two Queens of Hearts in it?

That brings us to the end of Double Jeopardy. Have you been keeping track of your bankroll? Are you ready to find out just what kind of ‘Murphy’ you really are? Well get ready, because now it’s time for Final Jeopardy.

Take a moment and decide how much you want to wager.

Answer: You’re thinking back, realizing you haven’t had a bad beat in four weeks.

The Question: How do you spend your time since you stopped playing poker last month?

Well that about wraps it up folks. I hope you scored well on today’s Poker Jeopardy! quiz. But if you didn’t, don’t worry, it probably means you’re doing pretty well at the tables.

Jake is a young writer born and raised in Los Angeles who currently works as a real estate agent at Commercial Brokers International. Jake was playing cards before he could even speak, being indoctrinated into a poker family where his father, Jeff, has been a regular at Commerce Casino for over 30 years. As an […]