What to Expect at the Inaugural Jewish Poker Championships

Just a few days remain until the inaugural Jewish Poker Championships (JPC). We’ve followed this intriguing story over the last few months and with the event just around the corner, we wanted to bring our readers an exclusive scoop on the last-minute preparations. Here with us again is JPC co-founder Andrew Rothbart.

CPL: Hey Andrew – thanks for taking the time to chat with us again today.

AR: Sure, I really appreciate you and your publication. It has definitely helped get the word out about the tournament.

CPL: Thanks so much! So, when we last checked in with you in October, you had mentioned that the JPC’s target was to have a “full house” of Jewish poker players taking part in the tournament, from novices to professionals. With the event just a couple days away, how many players have signed up?

AR: Well, we have well over 115 players registered via our website at www.playjewishpoker.com. Poker players have a tendency to register the day of the tournament. I had a meeting last week with the Venetian tournament poker director Tommy LaRosa and he told me that he has been fielding a lot of questions and inquires. We feel that will we have a strong showing, just as much as a “brand-named” tournament.

CPL: We noticed on your Twitter feed that Barry Greenstein gave you guys a retweet, which led to some additional signups. Will he be playing? How about other famous pro poker players or celebrities? In our video interview a couple months back you made mention of Mike Matusow and Eli Elezra…

AR: At this we can’t confirm or deny which pros will be attending. Answering that question can be a double edged sword. While it might attract more players and fans, it also might scare away the novices.

CPL: The party that’s slated to take place on the second day of the event, December 25th; what more can you tell us about it? Will there be stand-up comedy performances?

AR: The party was an ambitious task for the inaugural year and unfortunately that didn’t pan out. Instead we’ve replaced that concept with some other entertaining antics. The opening ceremonies will feature local Rabbi Mel Hecht making a blessing over a challah & wine. That will be followed by local Jewish comedian Lou Magelowitz doing a 15-minute comedy bit focusing on “Jews”.

On Day Two, all participants will have the ability to take pictures with a Moses impersonator. He’ll be all decked out in a beard, sandals, and the snake staff. It should be a blast. Finally, we have provided courtesy tables with blue & white M&M’s and Hannukah poker gelt for the players.  All the festivities will commence one hour prior to the start of the tournament: 1 p.m. at the Venetian’s Sands Poker Room.

CPL: We noticed that you got some media coverage a few weeks back in the Las Vegas Sun. Have any other major media outlets approached you?

AR: We just gave an interview via phone to a Jewish UK Paper called the Chronicle. That should be available next week. We also had a nice write up in Las Vegas David Magazine and Calvin Ayre’s website.

CPL: Who are the event’s sponsors?

CPL: Say someone’s on the fence as to whether or not to come play in the event. How would you convince them to come? 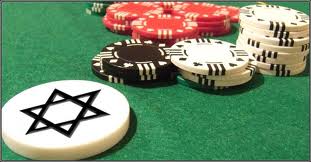 AR: Being part of anything inaugural is always special. As the JPC grows in popularity, it will likely become a much more difficult and tighter tournament; so this year is the best time to take part. Also, this will be an amazing opportunity to network with Jews from all over the world. Based on pre-registration, we will have at least 5 countries represented, with numerous business owners and community leaders among the participants.

CPL: Sounds good to us. Okay then, thanks Andrew and good luck to you – we hope the event’s going to be a successful one! We’ll check back with you one last time after the inaugural JPC to see how it went, and maybe you could provide us with some exclusive pictures of the happenings…

AR: Robbie, thank you so much for your time and helping us get the word out about the Jewish Poker Championships. We’ll be in touch.