How to Protect Yourself from Getting Cheated with Marked Cards

Taking a seat in a poker game comes with certain expectations, perhaps the most important of them being that you’re playing in a fair game, with no cheating occurring. One of the oldest forms of cheating used at the poker table has been the marking of cards.

Card marking has evolved from nail marks in certain locations on the back of cards to pre-marking a deck that is visible only with special glasses or contact lenses. During play, cards can be marked with a daub of invisible liquid.

Pre-marked decks and glasses to read them are readily available online under the guise of being used for magic tricks. Courtesy of Amazon Prime and many others, you could have a marked deck of Bicycle Cards arrive at your doorstep in just a couple of days for anywhere from $9 to $29. On Etsy, kits are available that include glasses and the choice of “professionally marked” Bicycle or Copag decks. Of course, these trusted playing card brands only make and sell unmarked cards – they can’t control what happens to their product after the sale.

Casinos have a plethora of cameras, but even combined with a security team and gaming staff trained to spot cheaters, it is extremely hard to pick out marked cards. Although a simple scan of a deck can spot the basic markings caused by nails or other objects, the only way to spot the invisible liquid is through black light – and even that doesn’t catch everything. Outside of casinos, how do local card rooms or neighborhood poker games look to stand up against these cheating tactics?

The Shuffle Tech Cheating Detection System is a product that Cardplayer Lifestyle recently became aware of. The inventor of the Shuffle Tech Cheating Detection System has deep previous experience in detecting art forgeries  of European Masters. We reached out to him and he informed Cardplayer Lifestyle that on a trip to Asia he saw these cheating devices being manufactured first-hand and was told by one manufacturer that hundreds of thousands of pre-marked marked decks, kits, and glasses have been sold. 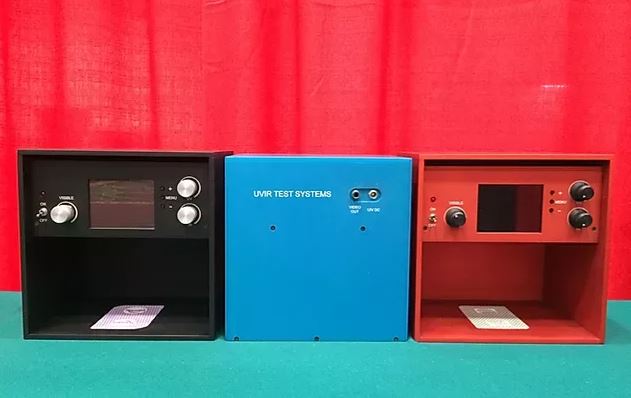 “I went on trip to China and visited a few companies which were advertising their products online and was quite amazed with the sophistication of technologies developed for this purpose,” he said.

Further investigation revealed poker analyzer units which is a system consisting of a deck of cards that have an invisible (to the naked eye) barcode printed on the edges, a portable scanning device such as a fake cell phone, and a CPU placed in the player’s pocket.

“When marked cards are introduced into the poker, game usually without the dealer’s knowledge, the cheater can program the CPU in advance. The type of game. The number of players. Whatever information he needs – winning position, flop cards, etc. The system works automatically and the unit scans the deck and provides information to the cheater’s earphone.”

The price for these cheating systems begins at $3,000 – and if companies are selling these units around the world, then there is a decent chance they’ve been used in a poker room that you may have set foot in.

With all this information, the Shuffle Tech Cheating Detection System was created in an effort to detect chemical markings applied to the surface of playing cards that would be invisible to the naked eye. The system detects ultraviolet fluorescence, visible spectrum details, and near infrared luminescence which are instantly viewed on a high definition video monitor. This advanced technology was created by a team with 30 years’ experience in the field of lasers, lights, optics, and chemicals.

That team has created several other products used in the gaming industry and saw them participate as speakers at the World Game Protection Conference Las Vegas in 2015 and 2016, along with a security seminar at G2E in 2013.

When asked about the intended market for the cheating detection technology and if it was for casinos, or local poker clubs, or even regular home games, the lead R&D developer said,  “All of the above. After my visit to China and reading articles of cheating scams in casinos where cheaters were arrested for using marked cards.”

Protecting the integrity of the game should be at the utmost importance for anyone running a poker game. The Shuffle Tech Cheating Detection System may be a substantial investment, but it will definitely give players peace-of-mind when they take a seat in your poker game.

Players shouldn’t have to worry about marked cards and invisible ink. They should be worrying about check-raising the flop and sitting behind stacks and towers of checks they can’t see over.

Shuffle Tech is currently taking product reservations and will be shipping out this summer.