How Mr. Wooden Shoes First Got to Vegas

Ed. Note: With the 2015 WSOP in full swing, Sebastian of www.BestPokerCoaching.com wanted to contribute this story of his first Las Vegas experience back in 2009. It makes for a great read; enjoy.

From a young age I was always attracted to the United States, the land of cowboys and risk-takers. Not much happened here anyway, growing up in a small town in Eastern-Netherlands; I played football (soccer) and since my 15th birthday I hung out in the local pubs with my friends, getting wasted every weekend. 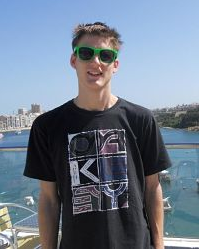 Dutch television was very pro America. Every Christmas we watched Home Alone.  I didn’t know much about politics back then, but I knew Monica Lewinsky was very good at her “job” at the White House. Also, channels like MTV and the Discovery Channel gave me insights about the diversity of the country and all these images in my head told me: the United States is the greatest country on earth!

Of all places in the U.S., Las Vegas had my biggest interest. A paradise build by mobsters in the desert where millionaires are born!

After I saw Marcel Luske (the Godfather of Dutch poker), bubbling the final table of the 2004 WSOP Main Event, I started playing “penny poker” with my friends.

When I turned 18, I would go to local casinos on the weekends (blinds €2/2) and play online tournaments on Everest and Full Tilt; just for fun, not for big money. I won more often than I lost, so I could buy the boys an extra round of beers or I would buy expensive shoes once in a while. At the end of the month I was usually broke again, but the financial aid coming in to pay for my university study allowed me to start the circle all over again every month. How could I complain about this situation?

In 2009, as I approached the end of my University studies, to celebrate our graduation two friends and I decided to travel around the United States for 3 months that September. The exact plan was to travel around, meet new people, see a new continent, and basically party a lot. We would see all the amazing places we knew from TV: New York, LA, Miami, the Grand Canyon, and of course Las Vegas. It would be a dream trip.

I had a big problem though. Because of my lifestyle, I was completely broke and I didn’t have a job, so I couldn’t really afford a 3-month trip. We agreed to a €10K budget for this trip, so I needed to figure out a way to get this amount quickly. I can still remember one of my friends saying. “How the hell you are going to get this money within 6 months?” I told him: “Don’t worry, I will figure something out. It has always worked out for me, so this time it will too!”

Back in the day, Full Tilt had great guarantees for their multi-table tournaments, so for me this was a good opportunity to get the money I needed. One week after the conversation with my friend, I put $26 on my Full Tilt account. My goal was clear: make that €10K through poker!

According to Sharkscope.com, I had 3 big tournament scores in 2009, but I can only remember 2 of them, so I’m not 100% sure these stats are accurate. Have a look: 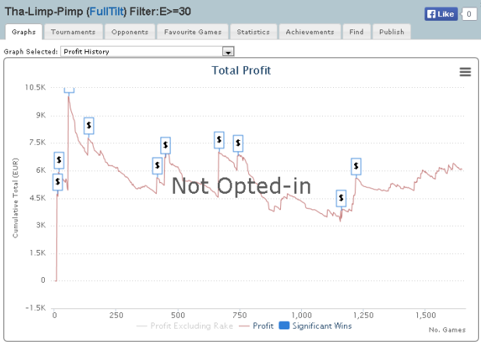 I remember winning that very first $26 tournament for around $3k, beating more than 1,000 players! I was thrilled about it, of course, but that wasn’t enough for our trip. That week I played very confidently. I wanted to score a big win again. A few days later, I made my way to a final table once again! I felt like Phil Ivey and thought I was a great poker player! In this tournament, the buy-in was actually $162 and the first place paid out $18k. I ended up finishing in 3rd place for $8k.

So, just like that, within 2 weeks, I had accumulated the $10K. So, I excitedly called my buddies to let them know we could book the tickets.

Our trip would bring us a lot of great memories. We started in Miami and drove up all the way to Niagara Falls in Canada. While there, at the Fallsview Casino, I could test my live poker skills again. I dropped CA$500 the first night playing CA$2/5 and felt bad about my play. A wild party night gave me the ego boost I needed. Next time I sat down to play, I destroyed the table and left Canada CA$900 richer. It was a great warm up for our next destination… Las Vegas! 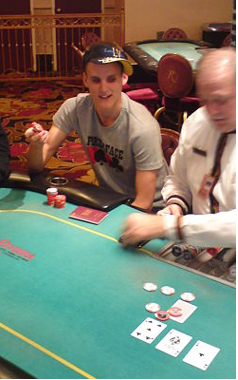 Watching “The Hangover” on my laptop in the airplane, our excitement for Vegas grew by the minute. Already at the airport you could find slot machines. Brilliant! The taxi dropped us at our hotel, the Sahara. We had booked a basic hotel room (we obviously weren’t high rollers) as our budget was about $100 per day for the trip. On my first day playing poker, I finished 2nd out of 80 in a $50 tournament, a good start. Over the next few days, I spent most of my poker time at the Venetian playing $5/5 cash games.

The people at the table gave me the nickname “Mr. Wooden Shoes” (you know, because I’m Dutch), while one lady always called me “Virgin Boy”. I didn’t mind. With my tight image and my baby face I got away with a lot of my bluffs. I also ran really well. After the first week I was up $3,000.

The whole Vegas lifestyle was very appealing to me. I wasted my winnings on partying, but I would also loose a few hundred bucks playing drunk cash games after a night out or throwing a few hundred dollars in the Megabucks slot machines. I didn’t mind. Back then, all the money I won was bonus money for me anyway.

You can divide the people in Vegas into 2 groups:

Of course everybody working in Vegas tries hard to make you happy, but as a tourist you also have to be very careful. The casino expects you to lose your money playing casino games. Poker dealers, waitresses, hotel personnel, and taxi drivers were always smiling and very helpful, but they all work for tips. I saw women selling sex and a broke guy living in the sewer tried to scam me with fake weed. Clearly, he was out of luck.  At the poker table, pros were switching tables to get position on the biggest fish. I also spoke to poker players who earned their living playing weekly freerolls. I guess everybody was looking for a piece of that Vegas pie! Honestly, the whole scene was very amusing to me. To me, Las Vegas seemed like a candy store, with a new surprise waiting for us around every corner.

There was also something else I noticed that I hadn’t been aware of prior, namely the tight-knit local community; everybody was very friendly.  Local poker players and casino staff would give each other rides home or invite each other over for dinner. An older guy taught me to chop the blinds for the right reasons, saying “you either never or always chop the blinds, not only when you get bad cards kiddo”.

Sadly, after a week in Vegas, it was time to move on. We rented a car and headed towards our next stops, which included Yosemite as well as the Grand Canyon. We did a whole route up the California coastline as well as a bit more gambling in Reno before ending up back in Vegas for a last night of partying. Then it was time to board the plane back home to Europe!

I left with lots of great memories and promised myself that one day I’d head back to Vegas to play at the WSOP.

It’s been almost 6 years since my trip. Unfortunately, I still wasn’t ready to test the waters for this year’s WSOP, which is going on as I type these words. I’m working hard to improve my poker skills at the moment and I’m going to test my live poker skills at the Unibet Open in Glasgow this weekend.

Poker players in Vegas: be ready. I plan on being at the WSOP next year.

Sebastian (a.k.a. “Steezy”) is a student of the Coaching For Profits program at BestPokerCoaching.com. He became a full-time professional poker player and poker coach in 2014. Gordon, head coach of the site, recognized his talent and took Steezy under his wing, coaching him to play for high stakes.