This past Christmas Eve, the newest poker room in Atlantic City made its debut at the Golden Nugget. Formerly known as the Trump Marina Hotel and Casino, the Golden Nugget is situated away from the Atlantic City Boardwalk, right next to the Borgata and Harrah’s. The casino itself is in the midst of full-blown renovations, with the new owners pumping $150 million into the property, and some of that money has clearly been dedicated towards the new poker room. 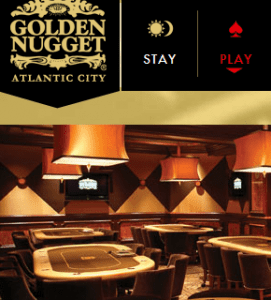 Though the original plans called for 35 tables, the poker room has opened with 20 “luxury” tables; in other words “not too much and not too little”. While press reports so far indicate that the room’s target market is higher stakes players who currently frequent the Borgata, thus far the room has mainly spread lower-stakes games.

About half of all poker play in Atlantic City currently takes place at the Borgata, so it’ll be interesting to see how the new Golden Nugget poker room fares in terms of luring players away from the more established rooms.

Like many of the other Atlantic City poker rooms, the Golden Nugget spreads No Limit Texas Hold’em, Pot Limit Omaha, and 7-Card-Stud at their cash game tables. In addition, they also spread mixed games. Aside from their cash game scene, the new poker room intends to offer a full schedule of tournaments, poker promotions, and other special events.

There are plans for an official grand opening in a week or two, which is sure to increase the buzz that there’s a new place to play poker in Atlantic City. If you plan on visiting the poker room and testing out the waters, I suggest calling ahead in advance to see what games are running. Call the Golden Nugget at (609) 441-2000 and just ask for poker room.

Beginning in early January, the poker room will roll out its schedule of 4 daily Texas Hold’em tournaments, as follows:

The Golden Nugget has a “24-Karat” rewards program and members of the program just have to show their card and they’ll receive $1.50 per hour of poker play. Definitely good value, since most other poker rooms around the city offer $1 per hour of play.

In a press release heralding the poker room’s debut, John Colville, the Golden Nugget’s poker director, said “I’m very excited about the opening of the Golden Nugget Atlantic City Poker Room and the opportunity to bring world-class events and high levels of customer service and luxury to this market, making this the ultimate player’s poker room.”