Get to Know the Poker Media: Lane Anderson

Next up in our ongoing “Get to Know the Poker Media” series is Lane Anderson. Best known as the Editor of PokerNews Canada, Lane is a relative newcomer to the world of  poker writing, active for just the last couple of years. 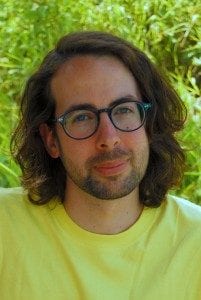 Like many relationships I’ve developed with other poker writers, Lane and I originally struck up a friendship over social media. Being aware that he’s a stay-at-home dad, I figured that his lifestyle and “story” would probably be relatively different from the “standard” and that he’d make for a great, unique interviewee. I wasn’t disappointed.

As a token of my appreciation for Lane agreeing to do this interview, I’ve refrained from editing any of his Canadian spelling. 🙂

I hope you enjoy the read as much as I did.

I began writing about poker at the start of 2013 when I created a personal blog just for fun. I started that new year by rediscovering online poker and getting involved on PokerStars’ PokerSchoolOnline (PSO). There is a blog section to the site and I began writing posts that were really well-received.

PokerStars used to have a really great series called the World Blogger Championship of Online Poker (WBCOOP). Poker bloggers from around the world competed in a tournament series and it was a lot of fun. My friend Ken Lo won the best blog that year — a prize worth $5,000 — and he went on to write and publish A Poker Player’s Guide To Mixed Games.

I took my blog off of PSO for the WBCOOP in order to try to make it more of a contender for the best blog prize and started FastLane Poker (which rarely gets updated these days). It was a few months after that when I saw a Craigslist ad for a poker writer; it turned out to be Robbie Davies looking for someone to write for PokerNews Canada. I sent him the link to my blog so he could see what I had been doing, and he put me to work. Three weeks later, he offered me the job to manage the site. That was just under three years ago.

I’ve written almost exclusively for PokerNews. I also wrote a few pieces for Canadian Poker Player Magazine and I was involved in the production of the mini-documentary from 888poker about Kevin “Phwap” Boudreau.

I really like the mental challenge of poker. I think it’s one of the greatest games for testing a really broad range of skills. I also love the social aspect of the game. To me, real poker is the poker being played around dining room tables in our neighbourhoods.

When I started for PokerNews, I was still in university finishing up my Bachelor of Arts degree. Throughout university, I worked as a waiter for a while. I also spent a few years in the construction industry building houses prior to that. I’ve been a mail carrier for Canada Post, a courier for FedEx, and worked for a moving company. But, during all of that, I knew I was going back to school at some point and my first interest was always to be a writer.

I’ve now settled into a beautiful old community in Lethbridge, Alberta. I grew up nearby but left when I was 16. I came back 15 years later and absolutely love this little city. Jaime Staples is putting us on the map. He grew up here too.

I’m married to a really amazing woman who has been such a great supporter of everything I do and aspire to do. We have three kids under five years old and I’m the stay-at-home dad. I love being at home and spending my days going to the library or the grocery store or the park and taking care of our kids. But some days it can be challenging to find a few hours to get some work done.

I really don’t play a lot of poker. I’ll go online to play once in a while or head down to the local poker room for a cheap nightly tournament. I’ll play cash a few times a year and I’ve recently gotten into a home game with a group of guys who don’t really know much more about the game than what they’ve seen on TV. They’re a lot of fun.

I think people greatly underestimate the skills required. A lot of poker people think they could be poker writers just by knowing the game, but writing, editing, content management, publishing, and SEO are things that you have to have at least some training in. Unfortunately, because poker media is not that lucrative, there is a lot of subpar content being published because the industry can’t afford a lot of talent.

I’m grateful to guys like Chad Holloway and Brad Willis who hold up a really high standard. We need more guys like them.

Since I’m also a stay-at-home dad, I’m happy to have had a job that requires only a dozen hours a week or so for the last few years. It provides enough income for our lifestyle. But I’m now diversifying a bit and starting to offer content marketing and social media management for non-poker companies.

I’ve recently launched London Road Media and have started taking on local clients. There is a lot of opportunity in my city (we were ranked Canada’s fourth-best place to do business in 2016) and there isn’t really anyone doing content marketing. In some ways, Lethbridge is about 10 years behind when it comes to businesses utilizing digital media.

I like to read and I enjoy creative writing. One of my favourite parts of each day is my time in the kitchen when I’m cooking dinner. I like trying new recipes and making something delicious.

I also have a love for old Volkswagens. I have a 1969 Squareback that I’ve reupholstered, rebuilt the engine, lowered it to a couple of inches off the pavement, and I love cruising around in that.

I also build cigar box guitars like the ones the blues were invented on (along with the Diddley bow). I appreciate the philosophy of making music with whatever is at your disposal. I can build a functional guitar that sounds impressively good in about five or six hours for little more than $20 in parts. They have so much soul. We also enjoy spending a lot of time outdoors and my wife is a yoga instructor (among other things) so yoga is always a part of our life.

I most enjoy writing editorials and features. Both are founded on a lot of research and I try to reveal something new to our audience. I don’t write them often just because of how time intensive they are, but I’m most proud of those pieces.

I feel like I’ve done a lot of what I want to do in poker. It’s been a really rewarding experience. I’d still like to apply my creative interests to the poker world somehow, whether that’s through scripting a Web series, writing stories, or something more narrative-based.

I’ve heard the horror stories from practically every female player I’ve met about the abuse they receive at the poker table. It’s disgusting. It may not be as prevalent at the higher stakes or in the upper echelons of the game (though it’s far from eradicated there either), but the $1/$2 and $2/$5 cash games that make up the bulk of poker playing in the world are an incredibly hostile place for women. 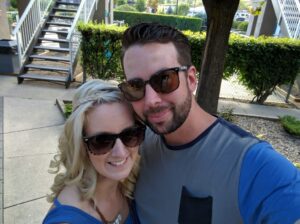 Lane, with his wife

I’m sure that most visitors to the Cardplayer Lifestyle poker blog are not among those who degrade, insult, and abuse women or hurl rape jokes or crude remarks across the table at them or even physically assault them, but the direct perpetrators of the abuse are not the only ones at fault. The men sitting at the table who sit silent and uncomfortable while this abuse takes place need to be making it known that THIS IS NOT OK. The silence is practically complicit.

For those people reading this who might work in the poker room or be involved in casino operations, women need you to have their back. Many of the stories I’ve heard  and witnessed involved poker room personnel making the environment worse by either ignoring it, encouraging it, dismissing it, or even putting the blame on the victim. The business of your regular customer is not worth protecting when they’re being so pathetically abusive to women in the room.

Please, please, please. This is not OK. Be the player who speaks up. Yes, women aren’t “princesses who need rescuing by the brave and noble prince” and many who have thick enough skin to play professionally are very capable of defending themselves, but being the passive witness only makes the environment worse.

Thanks for giving me the platform to say that.

Great advice Lane. It has given me a few ideas for my blog content.

I am going to start engaging with poker players and write some reviews about them and the products and software they use and anything that helps them to play better poker, like music ect.

Thanks again for your help.