At iNinja Poker we do things… well… a little different. It applies to everything in our business, and I think it should apply to our tour stop write ups here on Cardplayer Lifestyle. I don’t think you want to read a standard recap, never ending praise of the casino steak joint and poker room manager, and a listing of the prize pools and how great we are. I certainly don’t want to write that. Ugh. Sadly, I have to write it anyway for our website, so I added the standard stuff at the bottom of this article.

How many #trophies are YOU gonna win this week? #iNinja pic.twitter.com/tT1AVIRzLh

I thought it would be more interesting to read a little bit about what it’s like from the other side. So here is how things went for us.

This was our first major event since resurrecting the tour, and we really wanted it to be perfect. The future success of the business really hinged on this event. If we miss some guarantees, don’t do a great job reporting, or for any other reason the event doesn’t look like it was a great investment for the poker room, we would have real trouble getting gigs in the future. It’s a very competitive environment and established tours have a big advantage.

Luckily we crushed every guarantee, everyone had a ton of fun, and the Atlantis seems really pleased with how things went. Of course, things weren’t perfect…

Our team currently consists of five people. We started the event with four and picked one up during the series (more on that, later). My girlfriend, Jordan, and I are two of those people. For the month before the event I was working long days and just couldn’t seem to get enough work done. The day after we arrived in Reno, just a few days before the start of the first event, I finally went to urgent care and was diagnosed with pneumonia. Good times. With some hard core antibiotics and a prescription for “take it easy for a few days,” I was back on track. I did not, in fact, take it easy for a few days. I take it easy on Caribbean islands, not when my company is about to have it’s first real test. I worked my ass off.

Things that help if you have to work 14 hour days with pneumonia.

Of course I got better within a few days. But then Jordan got sick. Like really sick. She’s a trooper, but she was feeling rough for the final week of the ten day series. Our first new ninja, Molly Mossey (pink ninja) was sick about the same time. She was a trooper, though, and even scored her first ever trophy while fighting off a cold by winning the first of two Resurrection events. She was super happy in her trophy picture, and then took some drugs and went to bed.

Announcing the Pink Ninja! We are so happy that @MollyAnneMossey is our new brand ambassador. Welcome to the team! pic.twitter.com/Wrps3ygbq1

Our co-owner, Brian, had a sick wife for the last four days of the series as well, which just added to the list of disasters. And my main laptop started dying the day we arrived in Reno and gradually got worse every day. It’s the only machine we had with us that had an SD card slot, so I had to process all the photos on a wonky piece of crap that kept freezing up and randomly restarting on me. Luckily, the backup laptop was running smoothly for social media updates.

All kinds of tech issues happened, as is common when trying to set up a final table broadcast in a new place with very little time, equipment, or to be honest, knowledge or experience. Setting up the broadcast at every new venue is going to be a challenge, but the broadcasts are going to be a lot of fun from now on. Remember how I mentioned that new team member? 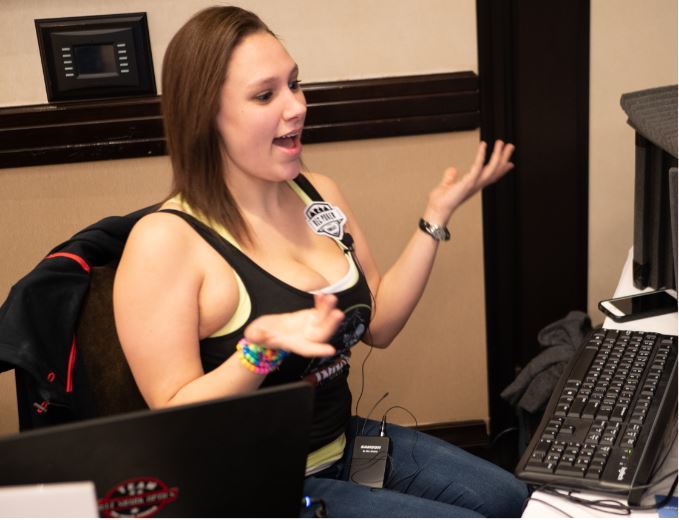 Meet Katrina Landry. She streams on twitch as Trouble Trina, a fitting name if you saw her downing tequila during the broadcast. We had a little gathering the night before the first event at a fun little watering hole just across the street from the Atlantis called The Lucky Beaver (have the 50-day dry aged burger, with option 1 and cajun tots).

Got poker questions? Come for our free pre-series meet and greet @LuckyBeaverReno on March 6 at 6:00. @foxpokerfox will answer your poker queries over a beer and Cajun tots. @PokerAtlantis pic.twitter.com/PK8ZXl2g5X

Our old friend Shyla showed up with Trina, and she was interested in the tour. She was dealing the event, but spent more time working for us than dealing cards. Trina is a blast on a broadcast. She can talk for hours without an “uh” or “umm”, has a ton of energy, and will certainly draw male viewers with her good looks and flirty personality. She also worked tirelessly helping us set up the broadcast as volunteer who just wanted to help the tour succeed and learn some things. After a few days of being super helpful, I saw her climbing a ladder and thought to myself: “Self, this girl might not even have health insurance. She should be covered under our insurance if she falls off that ladder and breaks her fool head.”

So, I demanded that she come down off the ladder and sign a contract immediately. She was ecstatic to join the team. Yes, the contract was actually written on the back of a structure sheet, and no my lawyer/girlfriend did not have a chance to review it before I presented it to Trina, but she was pleased that I had done it when she saw it.

Throwback to my fav outfit! When the stream was live & on fire🔥 Do you wanna see the stream make a comeback!? ♠️ ♥️♣️♦️ Something about dealing the @iNinjaPoker got sparks flying inside me. Passion. Fire 🔥 Who knows where we go from here!? But I got a good feeling 😏 #poker pic.twitter.com/sOdfoy7ddm

Trina and Molly did much of the broadcast of the main event final table, with drop ins from some other players, Brian, Jordan, and me. When I dropped in it was usually to bring champagne or tequila. They were both fantastic, which is great for Brian and me. We’ve both done quite a bit of final table commentary in the past and, while we don’t mind it, we don’t have a need for the spotlight these days and are happy to do other things. Plus, I can promise that you would rather watch Molly and Trina than the two of us. 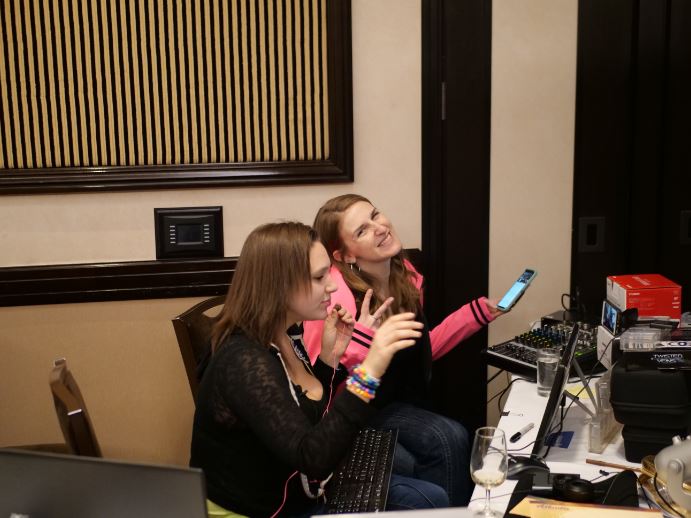 Speaking of Molly, did I mention that our pink ninja won her first ever trophy?! She was ecstatic to not just win a trophy, but win our first Resurrection event at our first tour stop since the tour’s resurrection, while she was representing us as our first new ninja!

Next Resurrection is Sunday March 17. Come be a #LeprechaunZombie pic.twitter.com/bhspzOJnMH

Speaking of trophies, our trophies were a constant topic of conversation. The trophies for the smaller events were silver shuriken (throwing stars) stuck into a base of two playing cards with the logos on them. They were excellent trophies, but the real stunner was the main event trophy. I don’t know how Jordan did it, but she managed to get us the coolest trophies I’ve ever seen. Rings are neat. Bracelets are fine. But haven’t you always wanted to own a sword?

An event for every bankroll from a freeroll sat to the iNinja signature Resurrection event, to a $500 multi-entry with stack buy-backs & a customized Katana main event trophy. Come play with the #PinkNinja @PokerAtlantis. See the Schedule athttps://t.co/76ap80ZxmY pic.twitter.com/NqEnxtRxFu

That’s right, our main event trophy is a custom-made katana. Straight from Japan, with our logo and ‘winner’ in Japanese etched into the razor sharp blade, it’s the real deal. Jordan cut her hand and was bleeding everywhere after she opened the package. It comes in a case with a stand and a scabbard as well, and yes, we kept the case locked during the series. You just can’t give a bunch of poker players access to something that is that much fun and that sharp. They would have been tossing apples into the air and trying to chop them in half, and someone would have lost a body part.

Final table on the Main Event 100k guaranteed! Names and Chip counts to come in the @iNinjaLive feed. The FT will stream live when down to 9. Congrats to all! pic.twitter.com/G4TXlHOfcf

We not only brought in a ton of players, we brought in the fun players. From pink-haired Sarah Kenyon, who immediately fell in love with our pink ninja Molly, to Lewis Mitchell, who lost a prop bet with fellow pro Ivan Zarate and had to wear a dress and cowboy boots during the main event, our players were having a good time.

Oh, and here’s the obligatory stuff, though in this case we really mean it. Atlantis is an amazing property. Really great stuff. The best Jewish deli this side of New York, great drinks and food at Bistro Napa, and amazing food everywhere. They absolutely dominate the Trip Advisor ratings for restaurants in Reno, and after being there for 12 days we could see why. There is also a fantastic poker room run by great people with tons of promos and $4 an hour in comps!. Keith, Andy, and Shannon all do a great job running the room and they can all hold their liquor when work is over, too!

We even did some local TV spots. Thanks so much to all the great stations that were kind enough to have us on!

Take a look at some live TV spots we did today in Reno, courtesy of @KRNV this one features @foxpokerfox pic.twitter.com/MY8MgB3VLk

Thanks to everyone at Atlantis and to the team that made this all happen. If you would like to win a custom-made katana in your local poker room, have them drop us a line or get the contact info for the poker room manager and send it to me at [email protected] and we’ll see if we can make it happen.