Is ESPN Destroying the Excitement for the WSOP Main Event?

I’ve spent more time watching ESPN than Tom Dwan has spent fulfilling his obligation in the durrrr challenge. But, I’ll be perfectly honest with you – ESPN is a joke. They’ve destroyed sports journalism over the past decade by morphing into the sports world’s version of TMZ. Most stories on ESPN have to do with uninteresting Tweets by LeBron James or Jameis Winston allegedly doing naughty things. And now they’re doing harm to poker’s most glorious event. 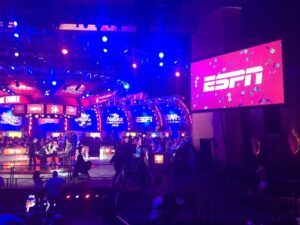 I spent a few hours in at the Rio in person watching what I hoped would be an exciting World Series of Poker Main Event final table. I should have known better. Like everyone who isn’t a (gravy-training) friend or family member of the three no-names who were lucky and went on a sick weeklong heater skillfully made it to the last day of the Main Event, I was subjected to sitting in the nosebleeds at the Penn & Teller Theater.

After a few hours of watching on a big screen TV due to obstructed view seating, I went home. On the drive home, I wondered why I even bothered wasting my time. What did I expect to witness? Some unforgettable poker moments that people will be talking about for the next decade? Why would I have expected that from a table with three players whose names I will not even remember in a year?

Some guy named Martin Jacobson won the event. Or was it Steve Jacobson? Does it matter? I tried really hard to get excited about the November Nine back in July. I read up on the players. After a few hours of research, I was bored. They are boring. The only story line that was intriguing to me was the return of Mark Newhouse to the final table. And that was an amazing accomplishment.

The rest of the players? Not even the slightest bit interesting. I don’t think I could possibly make up stories about these guys that would be an interesting read. They’re that boring. Congrats to them on their accomplishments and they have my respect as poker players. I’m just not intrigued by them. I would rather watch a Lifetime movie marathon than watch Martin Jacobson, Jorryt van Hoof, and Felix Stephensen battle it out on the felt.

ESPN doesn’t have the game’s best interests in mind

ESPN has long televised the World Series of Poker. Overall, I’d say they’ve done good things for the game of poker. However, they’re only in it for the money and have forced adjustments to poker’s biggest event in recent years that haven’t been good for the game itself. 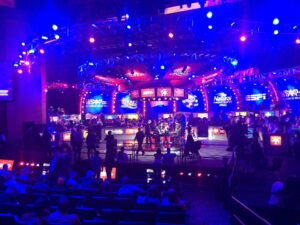 Taking in the poker action in person… yawn

Back in July, I had a good time watching the WSOP live at the Rio in Las Vegas. I got to see some of my favorite poker stars and even an NBA superstar (Paul Pierce). However, my excitement for the 2014 WSOP ended four months ago. There’s no good reason for the game of poker to hold off on the Main Event Final Table until November anymore.

Sure, in the rare event that a couple of big name poker pros such as Phil Ivey or Daniel Negreanu become November Nine participants, there would be some awesome build up. Unfortunately, since the Main Event is now essentially a lottery, the odds are against that happening in most years.

There was absolutely no build up the last few years. Many poker sites and blogs, including ESPN Poker, did everything they could to build interest in the final table. But, like I said, there was only one interesting story line.

So what changes should be made for the good of the game? 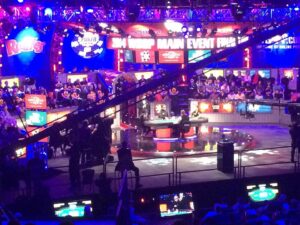 My VERY OBSTRUCTED view for most of the night

During the summer, the sports world in America is focused on baseball – a sport with declining popularity – and preseason football predictions. So why not put the World Series of Poker on primetime television on ESPN in July instead of November? And, yes, I know poker is NOT considered a sport by most people and poker players are certainly not traditionally thought of as athletes.

I know what you’re thinking: “it would be ridiculous to start the television coverage at the final table”. Why would it be ridiculous? Because then we would know the winner before watching the Day 1/2/3/etc. episodes? True. But hard anyone with an Internet connection could know what happens on Day 1/2/3/etc. before those episodes air on ESPN if they wanted to.

From a fan’s perspective, I find the current structure annoying. The atmosphere at the Rio during three-handed play was lame. The final table atmosphere at the Rio would have been livelier back in July because the WSOP was the talk of the poker community at that time. More people would watch the final table in July on TV as well because the WSOP is fresh in our minds at that time. We’re excited to see someone win millions in July, but our interest lessens after a few months of weak build up. Plus, it’s football season now.

Sure, have a one-week final table delay to allow players’ families and friends to fly in and create the one-of-a-kind stadium atmosphere. But four months? Ridiculous.

It was like watching paint dry, except less exciting

I hoped last night would be fun, but sitting in the nosebleeds to watch boring poker players compete four months after reaching the final table made me realize how silly it is to wait until November to conclude the WSOP Main Event.

Is the excitement in the Penn & Teller Theater jumping out at you too or is it just me?

In order for the final table to draw excitement after a four-month wait you’d need big name players. ESPN can’t rig the deck to ensure that the Hellmuths, Negreanus, and Iveys get there.

After a few hours of sitting in a theater with a lame atmosphere and boring poker action, I went home and probably won’t go back to attend again until I’m competing… or until ESPN finds a way to get me excited again.

*Disclaimer: The opinions expressed in this blog post are those of the author only and do not necessarily reflect those of Cardplayer Lifestyle.

Zzzz…Agreed! Is it me or why do I find myself unable to watch a WSOP broadcast by ESPN lately, especially in November?! Is it the bright back-lit billboards, the “where is everyone?” Penn & Teller Theater (if poker’s premiere event of the year is just more comedic material, I think the silent dude might be more entertaining than your production, ESPN), or the lack of (sorry young guns) something that at least the desperate for material commentators have–something called a personality. Granted, the participants are under “a little” pressure, but can ESPN draw something interesting out of them? A slightly different format? No more hole card cameras? Otherwise, I think its time to sing, “Welcome back…”. (Kotter-Kaplan!).

Thanks for you comment Johnny and thanks for reading this. Glad to see that Jon has sparked some discussion and hit a nerve with people 🙂