An online poker festival with big guarantees across three separate poker heartlands take place this month as BetMGM hosts the very special March Poker Mania. As well as playing for huge prize pools, players will have the chance to watch and learn from three absolute superstars of the game, who will each be hosting online streams across all three live markets.

Darren Elias, Andrew Neeme and Matt Berkey will all be at the felt. The only question is… will you?

In New Jersey, players will have the chance to interact with BetMGM Poker brand ambassador Darren Elias. Elias, the four-time WPT title winner, was born in the Garden State will also host his first-ever live stream during March Poker Mania on March 25th.

It’s fair to say that he is a lot more nervous about playing online on stream than live, where he has performed on camera for years. “Haha, absolutely!” Elias laughs.  The idea of hosting a live stream is a lot more daunting than a major final table to me.”

Elias is really looking forward to the opportunity to interact with more players and can’t wait to lift the lid on some of his secrets at the felt.

“I am going to make the most of it and try to have a good time interacting with the viewers while letting them into my thought process a bit.  There’s a first time for everything!” he added. 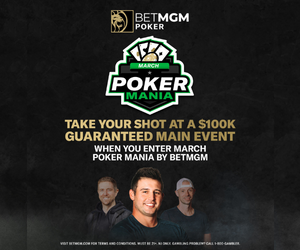 Opening up the field to players across three states and with multiple superstar hosts is a huge challenge, but one that Luke Staudenmaier, Director of Poker at BetMGM, relished.

“We’re thrilled that March Poker Mania will feature three poker titans, offering BetMGM players multiple new touchpoints with our brand,” he said. “It’s the first time that we’ve produced an online poker event in multiple states and with multiple hosts simultaneously, and we’re excited to further connect our players and our brand with MGM properties across the country” he remarked.

As well as the March Poker Mania Main Event, the festival will feature two brand-new events on the BetMGM Poker platform. A $1,000-entry Heads-up Bracket Battle will see 32 players take each other on in a single-elimination tournament showdown, with $10,000 in added value per state going into the prize pools.

There is also the chance for players to win their way into the second phase of the Main Event in their state via $55-entry multi-day tournament, which take place daily, with a separate leg each day, ahead of a $535 buy-in event on the final day of the festival.

The trio of poker titans hosting live streams continues with proud ‘Yinzer’ Matt Berkey streaming March Poker Mania events that begin on March 24th and will include giving away some surprise prizes to the audience along the way. Berkey, a Pittsburgh native, will also be streaming cash games, and will handicap college basketball on the Solve For Why YouTube channel as well, so stay tuned to his channel for more details there. 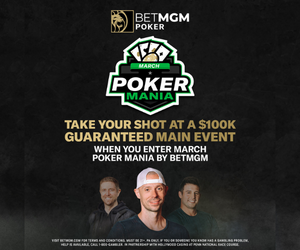 Last but by no means least, legendary poker vlogger Andrew Neeme will be streaming several March Poker Mania events on his YouTube channel. Neeme, who recently bought a share in the Lodge Poker Room in Houston, Texas along with Brad Owen and Doug Polk, will be hosting the online events in his native Michigan, as well as hosting the BetMGM Poker Cash Game Meetup at MGM Grand Detroit on March 23rd and a college basketball hangout at the exclusive BetMGM Sports Lounge on March 24th. Be sure to check back here at Cardplayer Lifestyle for some exciting additional information from all three players about those live events. 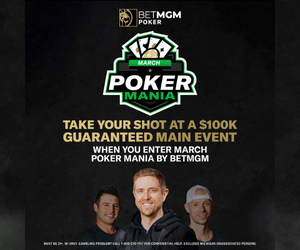 You can visit BetMGM’s official poker page for all the details. The BetMGM March Poker Mania is sure to be a massive hit and with $1.3 million in guarantees up for grabs, you can’t afford to miss it!