All About Poker Cards and Their History

The History of Poker Cards and their Symbols

Playing cards have a long and mysterious history; even though we are now very familiar with cards, what they look like and the multitude of games we can play with them, where they originally come from is still unknown.

However, whether you play poker online or enjoy a few games of solitaire, you are sure to be curious as to why the Ace of Spades is regarded as the “best” card or why there are Jokers if you don’t use them. 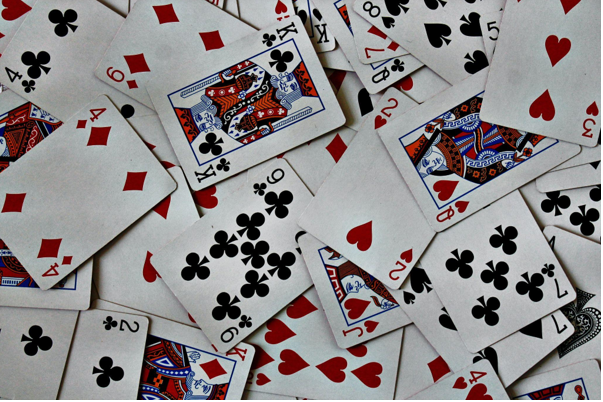 It is widely accepted that the first playing cards were most likely invented in China in the 9th Century. These early cards didn’t have the same symbols and numbers as we recognize today; instead, they had forfeits that would be used during drinking games.

Cards then spread throughout Asia and the Middle East, with different designs and games being invented along the way. However, it was only when cards and card games reached Europe that numbers and symbols were added.

The Latin suits, the suits that would transform into what we recognize today, were first created to add a new level of depth and strategy to card games. In the 14th and 15th Centuries, the Swiss and the Germans adapted the Latin suits to include suits such as Shields, Acorns, Roses, Bells, Hearts, and Leaves. These symbols are also heavily linked to tarot cards and their history.

We all recognize the four suits of cards we see today. They are derived from the German and Swiss suits discussed earlier and also have a somewhat mixed and heavily disputed history. 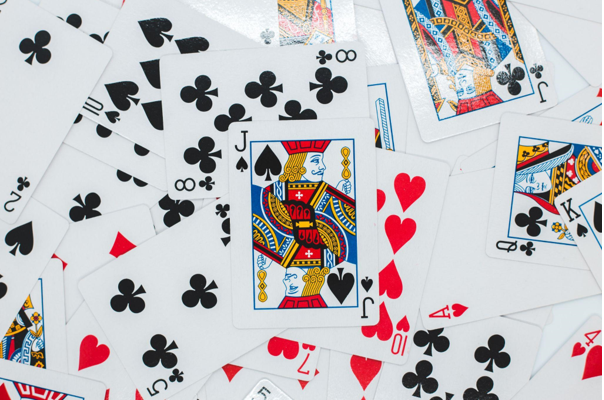 The French suits are the suits we see on cards today. Spades, Hearts, and Clubs all derive from the early German suits: Hearts, Acorns, and Leaves. Diamonds are the only exception, and this is simply down to French cards having a crescent shape instead of the Tiles symbol from the German decks.

The one question that many people have had about playing cards at some point in their life is why there are four suits to begin with? This has been a heavily debated topic over the years, with no real definitive history.

However, many seem to think the suits represent the different levels of society in Medieval times, with Spades representing the richest and most prominent in society and going down to clubs which represent the peasants.

This is debated due to the symbols meaning different things to different societies at the time. Diamonds, for example, represented merchants in the Latin suits, but diamonds were associated with the upper class in France. Therefore it is hard to decipher the reason why suits were carried over.

The other explanation is far more simple, with some believing there is no real history or reason behind the suits. There is a good chance they were chosen because they were widely recognizable symbols.

Why Black and Red?

Much like the suits, there is a fairly simple reason why cards are printed in black and red. Considering how popular they became in such a short period, hundreds of thousands of decks were being produced every day.

The ink was expensive, but black and red ink were the cheapest of the lot. Therefore it is easy to assume this is the reason for the choice, with decks today being printed in those colors due to tradition.

The Kings were designed and based on famous rulers, Julius Caesar, King David, Charlemagne, and Alexander the Great. Queens weren’t part of many decks at the time but were introduced in the French and British versions.

Interestingly, the English version of the game allowed for the ranking of the King and Queen to be swapped depending on who was on the throne. The King card that famously shows himself committing suicide was actually a printing error and has no deeper meaning beyond that.

Jacks were originally known as Knaves and are court cards whose origin is unknown. It is safe to assume it was added as part of a game at the time.

The Ace of Spades

The Ace of Spades has had importance for many centuries now. Not only is it widely accepted as the “strongest” card in a deck, but back during the French Revolution, it was used to represent peasants rising up and was elevated to the highest position in the deck.

During the 18th Century, the English government implemented a tax on cards, and companies had to prove they paid it by adding a stamp to a card. They chose the Ace of Spades, which led to designs of the card becoming more intricate and detailed to stop forgery. In almost every deck at the time, the Ace would be the most ornate card.

So much more can be told about cards, especially within the context of the poker games we all know and love, but it’s worthwhile to first know and appreciate their history.