5 different types of poker where you only face one opponent

This was probably the first type of poker that came to mind when you thought about the question, right? Heads-up poker consists of two players duking it out at the felt, mano-a-mano (or “womano-a-womano“), plain and simple. Whether they’re the last two players contesting the WSOP Main Event championship title at No Limit Hold’em, pros playing Open Faced Chinese Poker (OFC) against each other via a mobile app, or just a couple of kids playing 5-card draw around the kitchen table, heads-up poker is certainly one of the most action-packed varieties of poker anyone can play. With just one other person playing, the action is on you half the time, by definition! 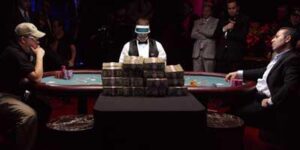 A relatively new game, Three Card Poker first popped up in the early 1990s, when it began being introduced in land-based casinos around the world. Your opponent when playing Three Card Poker is the casino itself, which of course has the inherent built-in advantage against you, as it does in all table games it spreads. To those unfamiliar with Three Card Poker, it involves an Ante bet as well as a Pair Plus bet, the latter of which gives you the opportunity to score a big win. While you’ll need to get really lucky to win the game’s top payout, if the cards fall your way a number of casinos offer you the chance to become an instant millionaire for a six-card royal. 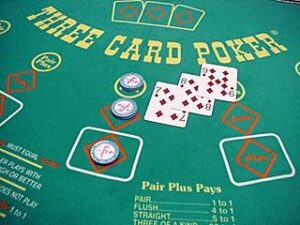 The third type of poker you play against just one opponent is video poker. In this form of poker, your opponent is a computer. There are numerous different types of video poker – as a matter of fact, here’s a sample video poker games list – but what all of them have in common is that you’re trying to make a qualifying hand that’ll trigger a payout. Most commonly, you’ll need to have Jacks or Better to get your money back when playing video poker. Of course, when wild cards are in play the game changes considerably, as do the payouts. 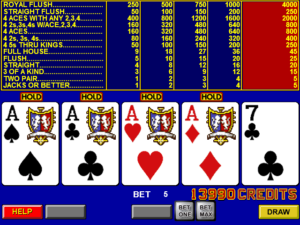 Caribbean Stud Poker is a table game spread at land-based casinos since the early 1980s in which you’re facing just one opponent: the house. In order to win big at this form of poker, not only must your five-card hand beat the dealer’s, but the dealer’s hand must also qualify. That means you could have a monster, but you’ll only get paid off according to the game’s payout table if the dealer has Ace-King high or better. The big money to be won when playing Caribbean Stud Poker, however, is when you opt in to try for the progressive jackpot. If you’re lucky enough to snag a royal flush and have opted in for the progressive payout, life-changing money is on the way.

Casino Hold’em is the game my friend forgot to account for when he asked me to name poker games in which you’d face only one opponent. Perhaps that’s because this game is among the newer variants to be spread at casinos around the world (only since 2000). The game plays out very similarly to Caribbean Stud Poker, in that you’d have to beat the dealer’s qualifying hand in order to win (dealer must have at least a pair of fours). Here, though, you and the dealer only receive two cards and utilize the same five board cards to make the best possible hand against one another. 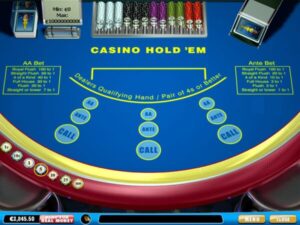 So there you have it. Five poker games in which you’d be facing only one opponent. Can you think of any others? I’d be happy to learn about a new type of poker that I might’ve missed. Let me know in the comments below.