Naturally, every time we get involved in a pot, we hope to hit big. Everything else aside, poker is so much easier when you’re making your hands instead of having to bluff your way to big pots! However, once you do make that big hand, the question becomes, how to proceed to get your opponent(s) to commit more chips to the pot?

Oftentimes, players will resort to slow-playing strategy, meaning they’ll try to disguise the strength of their hand in hopes the other players will continue to contribute to the pot while behind. Like all poker strategies, this one has its place at the felt but also comes with certain caveats that you should be aware of. 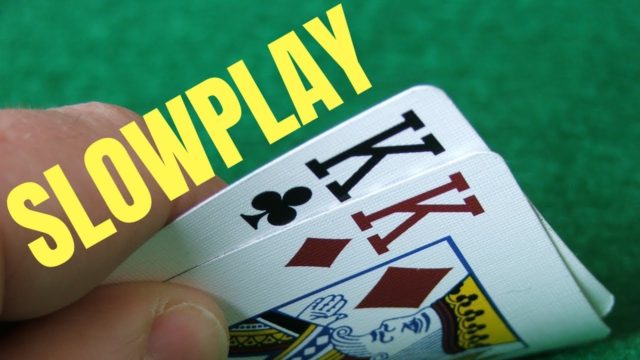 When you make a big hand like a set or top two pair on a board that contains a lot of potential draws, you shouldn’t be keen on slow-playing your hand. With these board textures, there are so many bad cards on turns and rivers that will either cost you some value or, worse, cost you the entire pot.

When you have a big made hand on a board where your opponents are likely to be chasing straights and flushes, you want to be the one driving the action and charging them for the privilege to draw. By betting and raising in these spots, you’re denying them the equity and are forcing them to make mistakes by calling big bets.

Additionally, you’ll get some value from other hands like over-pairs to the board, which might call you down thinking you’re raising a big draw. So, in these tricky spots, playing your hand fast and pretty much straightforward is often the best approach.

2. Slow Down When There Is No Danger

There are certain situations where you’ll flop so big that you can’t realistically expect your opponents to have very much at all. On the boards where you flop the top full house with a big pocket pair or holding a big set on a raggy board, you’ll want to slow play and let other players catch up.

Unlike the situation with draw-heavy boards, your opponents just aren’t likely to have anything good enough to keep calling you here. To be sure, sometimes they’ll have trips when you have the boat, but even then checking the flop is probably the best strategy as you’re more likely to take their entire stack by disguising the real strength of your hand.

The additional advantage of this approach is that more aggressive players will often try to take control of the hand on the turn once the flop gets checked through. So, they might start bluffing into you simply because you’ve shown what they perceive as weakness.

READ MORE: How to Deal with an Aggressive Poker Player on Your Left

In situations where you flop a big hand, such as bottom two pair, and are up against an opponent who is showing a lot of aggression, you ‘re probably better off slow-playing your hand and letting them do your bidding. These are spots where their hand ranges are pretty capped, consisting of big pocket pairs that are an over-pair to the board or, potentially, a top pair, top kicker kind of hand.

In these spots, raising won’t do you much good, as it will only give away information about the strength of your hand, which could be enough for a competent player to get away from their big pocket pair without losing their entire stack. On the other hand, if you let them drive the action, they’ll have much harder time figuring out what you have and will often end up firing all three barrels.

So, as illustrated above, there are situations where slow-playing is the optimal move to make, which will allow you to make the most money off your opponents. As a final, important, side note. Slow-playing should never be confused with slow-rolling, which is bad etiquette to say the very least.