Let’s face it; no-limit Texas Hold ‘Em gets boring. Getting stacked kings versus aces and constantly folding 80% of hands leads to plenty of staring into space, asking yourself, “there must be something more in this poker life, right?”

Well, dear friends, there is. A few years back, Cardplayer Lifestyle founder Robbie Strazynski penned an article detailing 5 Home Game Poker Variants Guaranteed to Generate Lots of Action. I though it would be fitting to write up something of a “continuation piece” that introduces you all to some of the so-called “banana games.” If you like it strange and full of gamble, well this Addams Family of poker variations will be your cup of tea.

I was inspired by Cardplayer Lifestyle’s inaugural Mixed Game Festival to learn more variants and have some more fun at the poker tables, and now I exclusively host home games that mix 20+ different games. (There’s me in the Nebraska jacket, wondering what the hell 3-2-1 was and how I was going to stop losing stacks of Westgate chips during it.)

If I can learn and enjoy these banana games, so can you! Let’s start with the aforementioned…

The game 3-2-1 is a Limit Omaha Hi-Lo game that can deal in up to eight players during a hand. As with standard limit mixed games, you can calculate your bets easily because there is a small blind and big blind (for $4/$8 mix, blinds would be $2/$4). After the initial round of betting, we begin the madness and let the cards fly.

You can use any of the boards to make the best Omaha high hand and best qualifying low (five cards eight-or-better). A round of betting ensues, with the limit being the size of the small bet.

Let’s be honest with ourselves here; we’re never folding this street. I know people say that a lot, but come on! There are three boards; NINE cards! How can you not have equity?

After the flop better, the dealer burns and puts out two turns. I’m sure you’ve got the gist now. This is a big bet street, and so is the river, where there’s only one card placed out in the community cards. How lame, right? 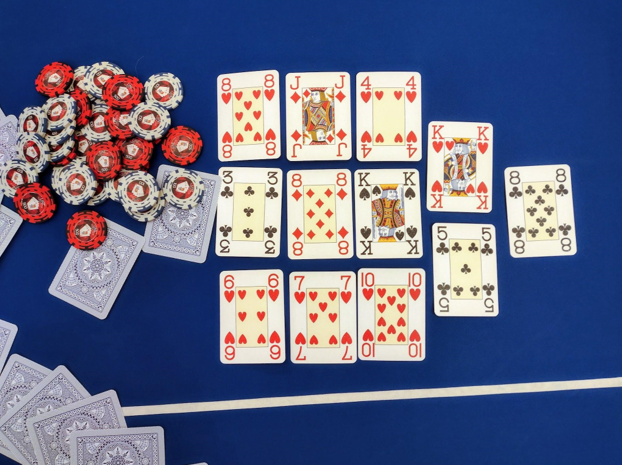 The above image is what a 3-2-1 board ends up looking like at showdown. A-2 would be the nut low using the bottom flop/turn, while you’d love to have a pair of kings for the nut high of quads.

This is sure to be a hit at home games and a game where virtually nobody folds until the big bet streets. In my experience, you want to particularly be chasing the nuts both ways. Any Ax2x hand is going to help, and we would prefer to have some suitedness and connectedness. With eight people in the hand, you should always value bet and attempt to drive people out , as it might help your chances at getting rid of someone with equity to the low.

As there’s a lot of information to digest, it’s important to always keep track of what is the best possible hand, as it can be incredibly disguised.

A fair word of warning: If you’re a couple of vodka and cranberries into the session or home game (as I tend to be during Vegas mixed games) you may tend to throw chips into the middle with a chance to only get half the pot at best, or lose the entire pot at worst.

Want an added challenge with this variant? Play by the “touching” rule: you can only play a board combination that’s touching. That means the middle board can play both turns, but the top board cannot use the bottom turn, and vice versa.

I preface this explanation by saying that you can’t blame me for this creation. This is one wacky game!

Omajack is as it sounds; a combination of 5-Card Omaha and blackjack. That lovely game that tends to eat away at your profits after a winning session at the tables has leaked its way into a mixed game.

Talk about no gamble, no future; this game requires you to consider what you’re playing for and if you can even make a decent blackjack hand in three cards. This one might honestly create action for the simple fact that everyone wants to get to showdown to actually witness how the game works!

I admit that Omajack is not a specialty of mine, but you likely want to hunt for some of the same things you would in Omaha games; somewhat connected and suited hands. However, you have to remember to hunt for combinations of cards that might get you 21, whether that’s A-5-5 or K-7-4. You almost have to split your hand in two at the start of the hand and hope the two best Omaha cards are the ones you’ll end up using, so you can play for the blackjack half. Of course, you may think you’ve got a “locked” 21, when the river forces you to use one of those cards for a better Omaha hand and thus recalibrate your blackjack card total.

You might lose your money much more slowly playing Omajack than blackjack, and for that, this game gets a gold star in my book.

While we all dream of seeing sevens on the reel of a slot machine, this unique poker home game variant requires some luck and strategy to win the entire pot.

This is a limit five-card triple draw game, and the pot could potentially be split into thirds.

There are three qualifying hands; a five-card seven low (A-5), four-card seven low badugi and at least three-of-a-kind with 777. A third of the pot goes to each player that can get each qualifier.

If nobody has any of these qualifying hands, the best A-5 low scoops the pot.

This game reminds me a bit of Archie, although there are more options and incentives to draw for the low thanks to the badugi. However, hands that have a high pair could sneak in to claim one-third, or if you happen to have a really good high, you can attempt to force opponents out with mediocre lows or borderline hands.

As usual, we are both likely and hoping to draw for both the low and badugi, and your opponents will be doing the same, so be wary of those “barely qualifying hands.” Wheels are pretty golden in 7-7-7.

Finally, while not an outright poker variant on it’s own, the blood river stipulation is a concoction from one of my home game friends that adds some spice to the standard no-limit Texas Hold ‘Em game.

All of the rules and procedures with NLHE are exactly the same, until we get to the river.

If the river card is red, after the river betting, a sixth community card is dealt with one more additional round of betting. If the river is black, that’s it; no more cards and that’s the last betting round.

Thus the name Blood River, for the red card and the blood that tends to spill into the sixth street with all the extra money headed into the pot.

It’s incredibly simple but keeps people in the hand as they may get an extra card to chase flush draws, straight draws or that two-outer they swear is coming home!

Note that this stipulation could be implemented in limit games as well, with the blood river continuing to run (along with additional betting rounds) until a black card is finally dealt.

Since not many people have heard of this stipulation, we feel we might be the foremost experts on Blood River. The best tip I can give in terms of hand strength is that black suited cards are incredibly strong. The reason for that is if you make a black flush, there is almost no way your opponent will be able to make a stronger red flush. They would need a specific runout to backdoor into something better. Sure, the theory might be a little flawed but after getting rivered so many times in this game, I tend to focus on black cards and include them more in my range.

On the flop and turn, you probably want to be sizing up a bit to extract more value from hands that might be looking to get two more cards at their draw. A flopped flush draw, especially a red one, has great potential to come in, especially with a possible three more community cards to come.

Finally, if you have a made hand and you know your opponent is drawing, I suggest praying. Pray to whatever or whomever you choose — shout out to the poker gods! — because good luck holding out with an extra river card.

So, those are a few lovely, fascinating, and thought provoking banana games for you to try at your next home game, or plead and tip the dealer to deal for you at a friendly mixed game! Good luck! 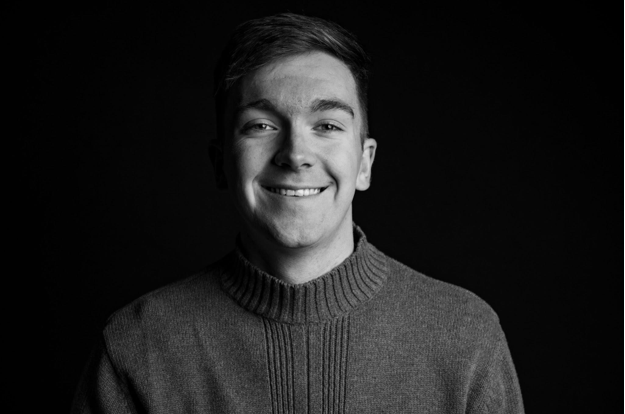 Alec Rome is a photographer and videographer from Nebraska. He was a part of the PokerNews’ WSOP photo team for 2021, and will return for the 2022 WSOP. He also hosts different poker streams and charity events when he’s not behind the camera. For fun, Alec enjoys playing mixed games with his friends, watching reality […]